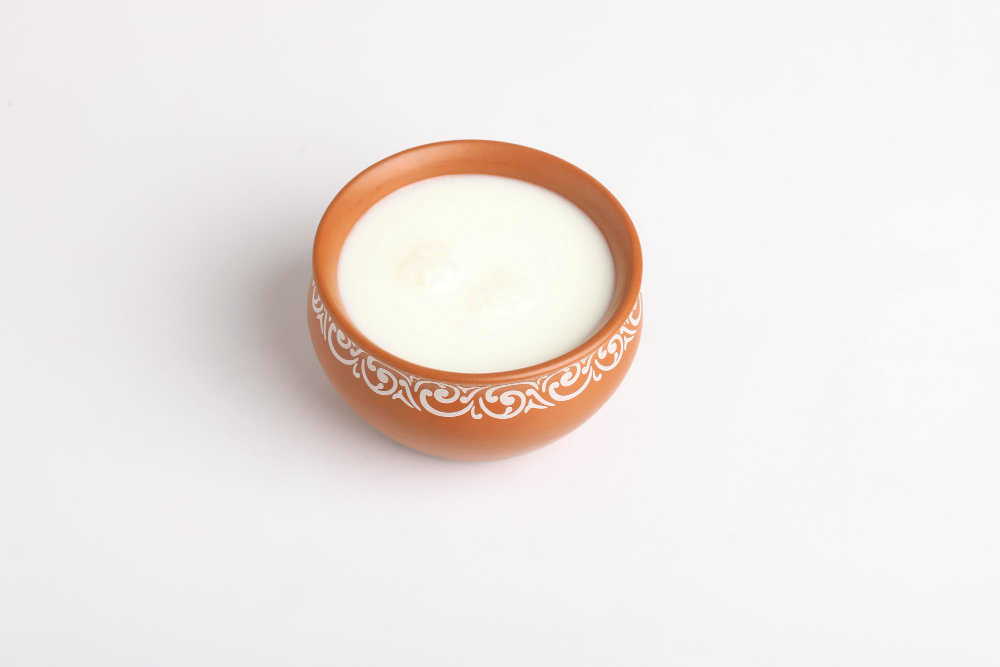 Yogurt is a semi-fluid fermented milk product with a smooth texture and a mildly sour flavor due to lactic acid. It can be crafted from milk from goats, sheep, and cows. In the US and north-central Europe, cow’s milk is preferred; in southeastern Europe and Turkey, goat and sheep’s milk are preferred. In India and Egypt, they use water buffalo milk most often. Yogurt can also be made with nondairy milk substitutes.

Although there are numerous stories about its discovery, yogurt may have originated in Turkey. It is prepared in Turkish homes by sterilizing and evaporating water from milk; once cooled, the milk is inoculated with yogurt from a previous batch, incubated for a few hours, and then slowly cooled to room temperature before use.

Commercial dairies typically supplement cow’s milk with milk solids to create yogurt with a custard-like consistency. Then, lactobacillus bulgaricus or other probiotics are added to concentrated sterilized milk. After inoculating the milk, it is incubated for four or five hours at a temperature of approximately 43–44 °C (110–112 °F) until the milk begins to develop curds.

Yogurt is well-known and consumed in almost every country on Earth. Various flavors and sweeteners may be added, or natural yogurt and fresh fruits or vegetables may be combined. For example, yogurt, cucumber, and spice salad are served in India (raita) and several Middle Eastern countries (jajik). Additionally, yogurt is used in soups and sauces.

Is Turkish Yogurt the Same as Greek?

The two types of yogurt are similar, with Turkish yogurt being the older form of the two. Both are inoculated with live probiotic microorganisms. Greek yogurt can be thicker because it is explicitly strained to have a broader and creamier consistency.

Turkish yogurt is either Turkish yogurt or yogurt made in the Turkish style. This is one of the most widely consumed types of yogurt worldwide and is similar in style to Balkan, or set-style, yogurt.

The term “yogurt” is found in various languages throughout the world and was derived from the Turkish language, where it first appeared over a thousand years ago. While Turkey is one of several countries with a long history of yogurt production, it is believed that this food originated in Turkey.

Turkish yogurt is an integral part of Turkish cuisine, served at nearly every meal. It is frequently added to the tops of meats, vegetables, and wraps as a base for soups and sauces. Salads, such as cucumber yogurt salad, often start with yogurt, though commonly thinned with water. Yogurt can be sweetened with sugar, spices, and dried fruits or combined with mineral water and salt to make the popular drink Ayran.

Turkish yogurt is made by infusing fresh milk with live cultures. While this yogurt is typically made with cow’s milk, it can also be made with sheep’s milk or a combination of the two. The milk is inoculated with live bacteria such as acidophilus or bifidobacteria, consuming lactose and producing lactic acid as a waste product. Typically, the cultures are pre-cultured yogurt that can be stirred into fresh milk as a starter. The cultures convert the milk to yogurt in about a day, at which point the yogurt can be eaten or refrigerated.

What Is Turkish Style Yogurt?

Apart from the standard type of Turkish yogurt, a few specialty Turkish yogurts are also produced. Silivri Turkish yogurt is primarily produced in Istanbul and is made from boiled sheep’s milk before adding the yogurt cultures. It is creamy because it separates from the remaining milk during fermentation. Strain yogurt is another Turkish yogurt made from silivri yogurts that have removed the cream. This yogurt is strained in cheesecloth bags to remove excess water, resulting in a more concentrated flavor than regular yogurt.

Why Is Greek Yogurt Bad for You?

Greek yogurt can only be sour for you if it has too much added sugar or lactose intolerance. However, experts believe that this dairy product is a healthy alternative to many items every day in kitchens, like mayonnaise.

Greek yogurt is made from cow’s milk that has been strained to remove excess whey, giving it a thicker consistency than natural yogurt. Along with being more viscous, it has a tangier flavor and is frequently used in recipes in place of mayonnaise, sour cream, or crème fraîche. 100g plain Greek yogurt, approximately 512 tablespoons, contains 133 calories, nearly 6g protein, and 10g fat, including saturated and unsaturated fat. Additionally, it has about 5g of carbohydrates, most of which are lactose (milk sugar).

It is a good source of calcium. This mineral is a prerequisite for strong bones and teeth and regular muscle contractions. It also contains various B vitamins, which are essential for energy production. Greek yogurt also contains iodine, which supports thyroid health and metabolic rate (the rate at which chemical reactions occur in the body) and maintains the health of our cells. While the yogurt ferments, the milk proteins separate from the rest of the milk. Strain yogurt is another Turkish yogurt made from silivri yogurts that have removed the cream. This yogurt is strained in cheesecloth bags to remove excess water, resulting in a more concentrated flavor than regular yogurt.

Yes, Turkish yogurt is sour and tangy compared to commercial brands that are sweetened and flavored.

Once you develop an appreciation for plain yogurt, you will find it challenging to consume sweet, fruity varieties, which are also available in most urban areas. Turkish yogurt is so rich and creamy that it has a sour cream-like consistency.

Certain varieties are sold with a thick layer of cream or skin affixed to the top, referred to as ‘kaymak.’

The Proper Way to Cut a Watermelon

Banana or Orange for Weight Loss?