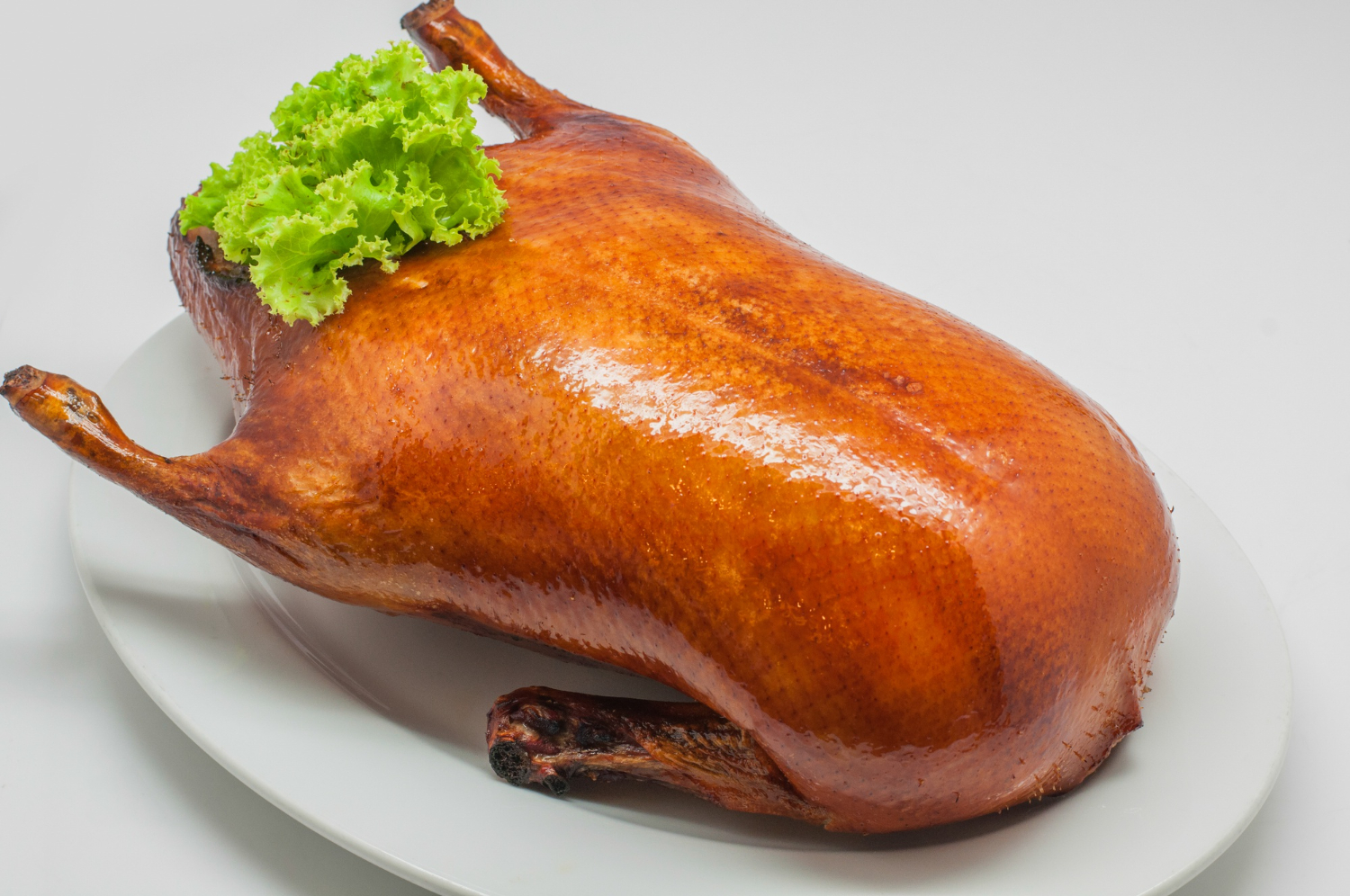 Peking Duck has crispy skin and only a tiny amount of meat, wrapped in a flour wrapper with spring onion and hoisin sauce. Roast Goose is chopped and served with rice or noodles, with more meat/bone in each slice. It comes with rice and either a sweet plum sauce or a sweet soy sauce.

You cannot eat a Peking Duck by yourself (unless you eat a lot or wish to shorten your lifespan due to cholesterol). It’s usually a dish for two. The HK roast goose, on the other hand, can be served as a rice topping. The roast goose can be found hanging on the windows of Hong Kong “BBQ” restaurants alongside white chicken, crispy pork skin, and roast pork belly.

What’s The Difference Between Peking Duck and Roast Duck?

Though they appear to be the same and taste the same, the two types of duck are processed, cooked, sliced, and consumed in very different ways.

Peking duck is a type of roasted duck with a very thin layer of crispy skin that snaps when you bite it, which is the polar opposite of Cantonese roast duck skin. Traditionally, Peking duck is served with a focus on the crisp skin rather than the meat.

Both open and closed ovens can be used to roast Peking duck. They are usually a brick fireplace with a duck pole across it in specialty roast duck shops. The birds are then slowly roasted over fruitwood that is on fire. Quanjude Roast Duck Restaurant, Beijing’s oldest and most famous roast duck specialty restaurant, is an example of this.

Although open ovens are visually appealing, they require a large working area and staffing to operate because the ducks must be rotated every few minutes. The cost of installing smoke extractors is also high, adding to the burden of businesses located in urban areas where land and other resources are already more expensive. These dissuading factors have resulted in fewer establishments using open ovens. 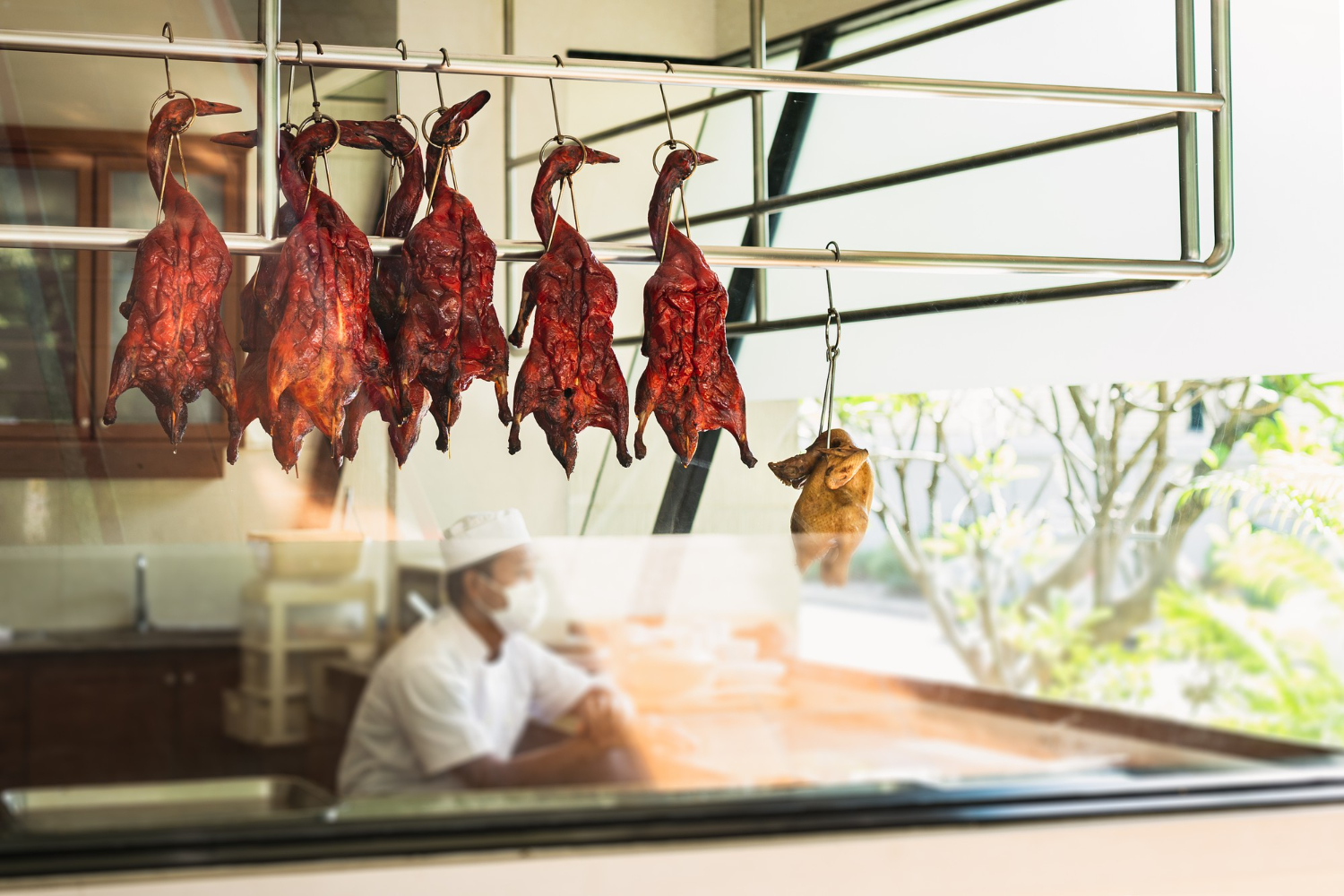 Many people eat roast duck because of two distinctive ways to prepare it: northern Beijing and southern Cantonese. Baked in different ovens and processed, sliced, and consumed differently, they’re two completely different dishes. Peking duck has recently become a hybrid of Cantonese and American duck and is more similar to Cantonese duck.

The skin of Cantonese roast duck is glossy and oily smooth from the roasting process, similar to that of a roast chicken. However, if cooked properly, the duck meat is plump and juicy, with a thick and fatty layer of skin.

Roasted ducks are hung in the hearth of a large, sealed iron barrel with gas burning below. These, like the ones at Beijing’s Bianyifang Roast Duck Shop, are cooked by the heat trapped within the furnace. This is the method of cooking most commonly used for Cantonese roast ducks in Taiwan.

Closed ovens take up little space and can be used to roast duck, pork, geese, and other foods. They are the more popular choice among restaurants due to their versatility and easily adjustable heat settings. Some Cantonese restaurants have hanging stoves. Their storefronts are designed to attract customers’ attention.

What is the Difference Between Peking Duck and Crispy Duck?

Peking duck has been prepared since the emperors. The dish is claimed to have originated in Beijing, formerly known as Peking. The skin is crisp and thin, and the cook slices the flesh finely before the diners. The meal is roasted until the skin is crispy and dark brown, then cut to serve with steaming pancakes, julienned scallions, hoisin sauce, and black vinegar.

Peking duck is still one of China’s most famous culinary exports. The duck is coated in a sweet sauce comparable to hoisin. However, duck pairs well with other traditional ingredients such as honey and soy, ginger, and Szechuan peppercorns and is frequently used to fill inside spring rolls.

To marinate the duck, we begin by putting it in a pot and adding various spices. We then steam the duck until it is tender and finally fry it until crispy. Accordingly, Peking duck meat has less fat and is crisper and drier. American-style fried duck is often served with buns instead of pancakes.

Though some Asian fusion restaurants offer Peking duck as an option, they are also known to serve crispy aromatic duck. After being prepared by marinating in spices and then deep-fried, the duck is served alongside stir-fried vegetables, rice, or noodles.

A well-known Beijing dish made of duck is the Peking duck. Authentic versions focus on the skin, with the cook slicing the meat in front of the guests.

Peking and Cantonese ducks are processed in two different ways.

Duck Cantonese is packed with various Chinese herbs, such as anise, ginger, and spring onions, which flavor the meat and bones. In addition, the hot oil is drizzled over the duck at the end of roasting so that the skin will be more tightly drawn together and boost the meat’s flavor better.

Can We Eat Dragon Fruit On Empty Stomach