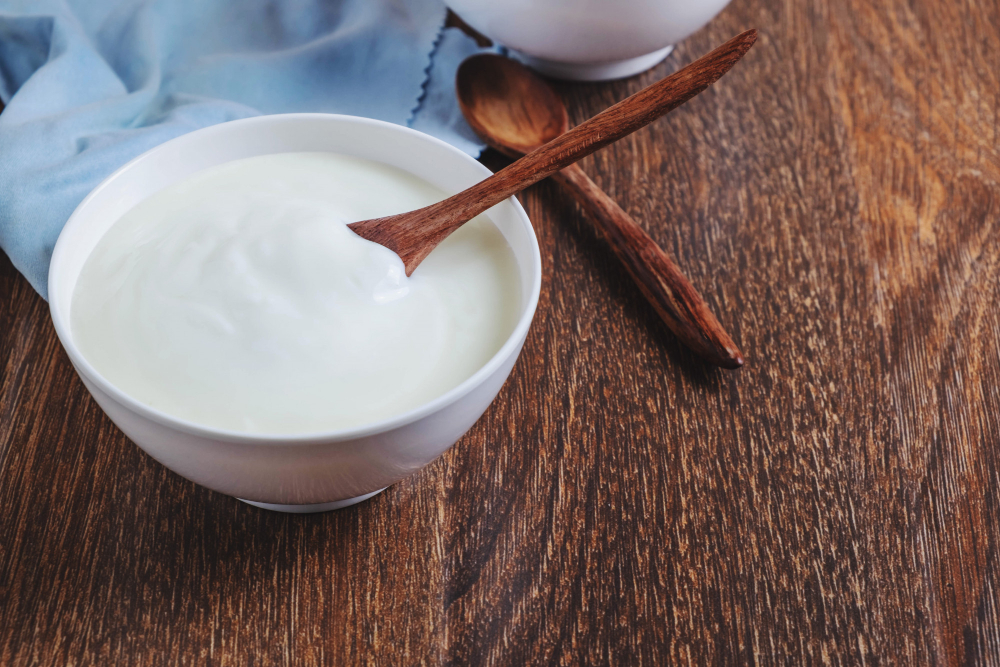 Yogurt comes from culturally diverse backgrounds. The varieties span the globe. Icelandic, Greek, French, goat milk, soy-based, almond-based, and coconut-based yogurts are just some of the varieties that stock the racks of a solitary grocery store’s freezer aisle. It is best described as jellied or congealed milk.

To make yogurt, hot milk is combined with probiotic bacteria. It is allowed to sit for a specified number of hours at a specific temperature range.

Yogurt comes in various flavors and is frequently served for breakfast alongside fresh fruit, nuts, and granola or in savory sauces and salad dressings.

With so many varieties of yogurt to choose from, there are numerous questions about the creamy dairy product. Specifically, what are the health benefits of each type, and is one a better choice than another? Also, is there a disadvantage to eating yogurt?

Yogurt is packed with nutrients and probiotics that promote gut health. In addition, the bacteria in yogurt convert lactose to lactic acid, which means that some people with lactose intolerance can tolerate yogurt in small amounts.

While yogurt is relatively healthy, admixtures such as sugar can increase its calories and degrade the nutritional quality, so read the ingredients list carefully.

Is Plain Yogurt the Same as Vanilla Yogurt?

Many folks believe there is no difference between vanilla and plain varieties of a product (for example, yogurt). There are differences.

Plain refers to the absence of any flavor. And vanilla is a flavor, albeit a very subtle one. Vanilla flavoring is derived from Mexican orchids of the genus vanilla. Vanilla is frequently described as delicate, spicy, and pure in flavor. It has a sophisticated taste and an equally sophisticated floral aroma described as a “peculiar bouquet.” Despite its high price, vanilla is widely used in commercial and domestic baking, perfume manufacturing, and aromatherapy. Yogurt is a super immunity food that aids in digestion, and immune function eliminates harmful bacteria and yeast infections and decreases inflammation.

Because yogurt has many health benefits, it’s well worth including in your meal planning. Add homemade yogurt to your child’s school lunch box, store yogurts in the refrigerator at work or home, or eat yogurt with fresh berries for a super immunity dessert or breakfast. Rather than snacking on “empty” calories like chocolate and crisps, making yogurt or a fruit smoothie with yogurt provides an excellent source of calcium, which is necessary for strong bones and teeth.

If you enjoy yogurt with granola and fresh fruit like us, you can also make yogurt parfaits the night before. Layer yogurt and toppings in a container, cover, and chill. You can make yogurt parfaits up to three days in advance. Again, this makes breakfast on school days that much easier.

Can I Substitute Plain Yogurt for Vanilla Yogurt?

You can, but you must consider the flavor requirements of what you are cooking or preparing in the first place. For example, vanilla yogurt will carry the vanilla flavor and added sugar in most cases.

Numerous recipes for baked goods, particularly pancakes, biscuits, and cakes, call for buttermilk: Its acid reacts with baking soda to leaven the batter, its viscosity imparts a specific consistency to the batter, and its mild sourness imparts flavor. Clabbered milk is a common substitute for buttermilk; it is milk mixed with lemon juice or vinegar. While the acid adds tang and causes the proteins to be aggregate, it does not contribute to the liquid body.

However, the results were disappointing when we used clabbered milk to make drop biscuits and buttermilk pancakes. Clabbered milk is far less dense than buttermilk. This resulted in both baked goods spreading more than necessary, collapsing into squat, uneven shapes. Cakes with clabbered milk performed better because the batter was contained within the pan’s walls.

We reasoned that yogurt, another acidic dairy product, might suit all applications. It was too thick, but once you thinned it down with some water, it had acidity and consistency similar to buttermilk, and baked goods made with it were not easy to distinguish from those made with the real thing.

Kefir has a buttermilk-like consistency and could also be used in place of buttermilk in recipes. Due to the higher protein content of kefir than buttermilk, pancakes and biscuits browned slightly more quickly but were still perfectly acceptable.

In the future, if we require a substitute for buttermilk, we will use thinned kefir or yogurt instead of milk.

Is Plain Yogurt Better for You Than Flavored?

Not necessarily. Typically, higher-fat yogurts are best for cooking. However, the challenge doesn’t stop there. You also have to stop the yogurt from separating during the cooking process.

Yogurt is simply milk that has been fermented with a bacterial culture to impart its distinctive sour flavor. Because not all whey has been removed, full-fat plain yogurt has a thinner texture. Therefore, it is particularly well-suited for salad dressings, marinades, and baking.

Skyr is a soft Icelandic cheese made with rennet that has a yogurt-like flavor and texture. Since the Middle Ages, Icelanders have consumed Skyr and frequently attribute their good health. It is strained four times to achieve its thick, rich texture and is made primarily with skim milk, making it fat-free. Skyr is made the same way as traditional Greek yogurt, but it is far and away from the creamiest, best-tasting, fat-free, and preservative-free option. Additionally, it is less tart than the Greek version. I combine it with fruit, add it to soups to add creaminess, and make dips. However, avoid using it in baking as it alters the texture of scones and cakes.

The two are equal in all respects, with just the flavor being the barrier. Use the type that complements your recipe.

Greek yogurt is creamy and thick due to removing much of the whey. It contains more protein, which may explain why it is so popular. It is available in various fat percentages and is frequently flavored with fruit. It’s best to flavor plain Greek yogurt or Skyr yourself, as many store-bought fruited varieties contain additives and sweeteners. Before purchasing, always read the labels.

Due to the thickness of labneh, which is made by straining yogurt, it is sometimes referred to as yogurt cheese. It appears in a variety of Middle Eastern dishes and dips. Combine approximately 12 teaspoon salt with a carton of full-fat Greek yogurt to prepare your own. Please place it in a cheesecloth and drip overnight over a bowl. Although not entirely authentic, this is an acceptable substitute. It is incredibly thick and can be used in place of soft cream cheese. Additionally, it is delectable served Middle Eastern-style, spread on a plate, and sprinkled with zaatar or fresh herbs such as mint or cilantro.

When Does Seaweed Salad Go Bad

Are Yogurt Drops Bad for Rabbits?