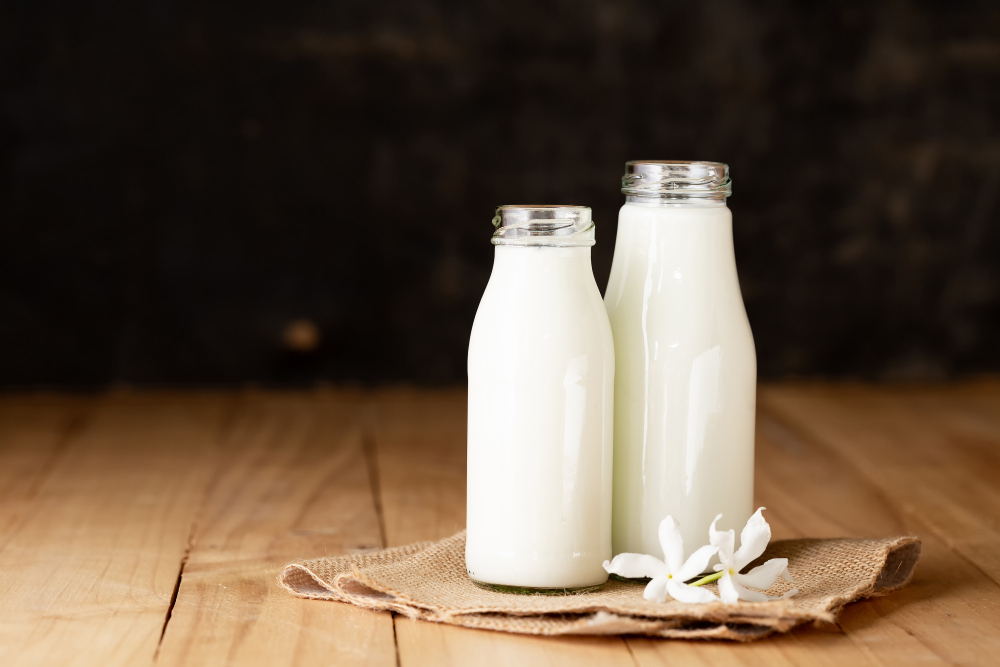 What is the process of making yogurt, and can you use sour milk for yogurt? Yogurt contains “live cultures,” as the labels on most containers advertise. This means that the yogurt contains live bacteria! Microbes that cause illness are not present here. But, on the other hand, these cultures have a remarkable ability to transform milk into a delicious yogurt treat.

Yogurt is made when bacteria, a microorganism, break down milk. Several types of bacteria are commonly used in yogurt production, and these bacteria are beneficial to your health. You can usually tell what type of bacteria is in yogurt by looking at the list of ingredients on the container.

The lactose sugars in the milk are converted into lactic acid by these bacteria during the fermentation process. The lactic acid in the milk makes it thicken and taste tart as it ferments. As a result of the bacteria’s already partial breakdown of the milk, it is believed that yogurt is more accessible for humans to digest. It’s also possible that eating yogurt can help refill the bacteria population numbers in your intestinal system that have been lost due to an upset stomach or antibiotics.

Can Milk Turn into Yogurt by Itself?

Theoretically, yes, but wild curdling of milk into yogurt will produce inconsistent results, and there’s a big chance that the bacteria working the milk is not probiotic.

One of nature’s most versatile processes, fermentation, can be applied to virtually any food product. For example, yogurt is made from milk that bacteria have fermented. So let’s dig deeper to understand better how yogurt is fermented and the microbiology involved.

Fermented foods have transformed microorganisms from more complex to simpler substances. For example, grape juice or milk can be changed completely using this simple process.

A single bacterial strain usually inhibits the growth of other bacterial strains because they compete for the same resources. When making yogurt, however, this isn’t the case. For yogurt production, probiotic bacteria and the Streptococcus thermophilus strain work together to produce a stable balance of bacteria in the culture. Together, they convert milk’s lactose into lactic acid, used to make yogurt.

How Long Does It Take for Milk to Turn into Yogurt?

Maintaining a constant temperature of 110°F to 115°F (43°C to 46°C) is all that’s left to do once the milk and starter have been combined. How many times have you looked up how long it takes to make some good yogurt? Here’s how you’ll do it: Allowing the good bacteria to thrive for five to ten hours. During the entire time, do not disturb it at all. This incubation stage can be completed using a yogurt machine or any other homemade incubators that you have on hand. Transferring the mixture from a pot into small jars can be messy, so keep that in mind when you do so. Using a spoon (preferably one with a spout) is advantageous in this situation.

Is Yogurt Made Out of Milk?

Yes, yogurt is the product of milk fermentation.

When probiotic bacterial strains consume lactose from milk, lactose is formed and converted into lactic acid. Increasing the lactose, they convert to lactic acid results in a more acidic final product. Yogurt forms when caseins (milk proteins) clump together, transforming the milk into a thicker, creamier consistency. Yogurt contains bacterial strains that inhibit the growth of other bacteria that would otherwise spoil milk. To preserve food, you can use fermentation.

Once the yogurt’s desired flavor and texture have been achieved, the fermentation process must be halted. Because lower temperatures inhibit the growth of two bacteria that drive the process, cooling it down is a good option. Preventing the yogurt from becoming more acidic by lowering its temperature preserves its texture and flavor.

We’ve had yogurt and other fermented milk throughout our history, like kefir and kumis. In addition to being a traditional ingredient in many dishes, they make a convenient snack and a filling breakfast staple. They may even be one of our earliest memories of eating something solid for some of us. The origins of yogurt date back to 5,000 B.C.E. There are a wide variety of yogurts to choose from around the world.

What Process Converts Milk into Yogurt?

At least 10,000 years old, fermentation is the foaming that occurs during the production of wine and beer. In the 17th century, scientists realized the frothing was caused by carbon dioxide gas evolution. He also recognized that fermentation produces substances other than ethyl alcohol and carbon dioxide, which were previously thought to be the only outcomes of yeast and other microorganisms growing without air (anaerobically). French chemist and microbiologist Louis Pasteur coined the term “fermentation” in the 19th century.

It was discovered in the early 1920s when muscle extracts catalyzed lactate production from glucose. That muscle extracts also produced the same intermediate compounds formed during grain fermentation. Since fermentation reactions aren’t unique to yeast, they can be found in many situations where glucose is used. Glycolysis was initially defined as the breakdown of sugar into lactate around 1930.

Can Yogurt Help with Constipation?