In any case, slathering on the mayo and salt would negate the health benefits of the chicken or tuna. And if you make the salad with fresh veggies, herbs, and fruit, replace yogurt for some of the mayonnaise, and don’t add too much salt; you’ll have what you want from tuna or chicken.

Tuna is a great meal to include in your healthy eating regimen. It’s high in protein, strong in omega-3 fatty acids, low in calories, and a low-mercury fish. Chicken is one of the most favored meats because it is less expensive than other meats and more easily accessible to most meat lovers.

Salads are a great way to combine tuna with other nutritional foods for a light lunch or dinner. Along with drained canned tuna, add dark greens like romaine lettuce, spinach, or kale, which are high in vitamins C, E, and calcium, as well as cannellini beans or garbanzo beans for extra protein and fiber.

Another healthy way to cook chicken is to grill it before combining it with salad. This is since you are just adding a small quantity of fat to the dish by gently spraying the chicken with olive oil or another healthy oil.

Steaming or grilling a fresh tuna steak before putting salad greens is one of the healthiest and most delightful ways to eat tuna. This way of cooking brings out the full, rich tastes of the fish. Brush a minimal coating of olive oil and fresh lime juice on the surface of the tuna before grilling to enhance the flavor, seal in moisture, and tenderize.

Which Is Better: Chicken or Tuna?

Chicken breast and tuna are excellent sources of protein. They are full of protein and healthy fats, which are beneficial to our health in various ways.

Tuna can be pricey when purchased fresh; therefore, many people choose the canned variety more cost-effectively. Chicken breast is a popular type of meat that is low in fat and high in protein.

Tuna and chicken breast are excellent additions to reducing weight due to their low saturated fat level. In addition, eating these foods can help lessen your risks of cardiovascular illness, such as heart attacks and strokes, and reduce inflammation throughout the body.

Another resemblance between tuna and chicken breast is both global popularity. However, the most incredible place to eat tuna is at a high-end Japanese restaurant because this meal is designed to be eaten raw, which requires a high-quality type of fish and a skilled chef to prepare.

Tuna and chicken breast both taste great and have a lot of health benefits. However, their flavor characteristics are vastly different, leading to a preference for one over the other.

Is A Chicken Salad Healthy?

A binder, such as salad dressing, is used to blend cooked chicken with various vegetables, fruits, herbs, seeds, spices, and nuts in chicken salad. As a result, chicken salad is high in minerals, vitamins, and proteins and may easily be incorporated into a healthy meal and diet.

Chicken salad can be made using a variety of flavor profiles and components. It’s typically served cold and made with cooked chicken, a dressing, and occasionally other vegetables, nuts, seeds, or fruit for taste and crunch.

Chicken salad can be found in delis and restaurants, purchased prepackaged at the grocery store, or made at home. Unfortunately, certain additives, such as the type and amount of mayo used, can considerably increase the calories and trans fat content of chicken salad, making it less healthful than it could be.

A tiny plate of chicken salad might easily contain 400 calories or more. Yet, despite the word “salad,” it’s usually served on bread or in a wrap rather than on a bed of fresh greens.

Chicken salad has low carbohydrate, fiber, and sugar content while high in protein, calories, and fat. These numbers can be easily changed by adding fruits, nuts, and seeds or using a lower-calorie binder like yogurt.

Chicken salad is a low-cost, nutrient-dense supply of protein that is simple to prepare at home. However, eating a significant amount of chicken salad at once or adding many more fabulous items may lessen some of the dish’s health benefits.

How Bad Is Tuna Salad for You? 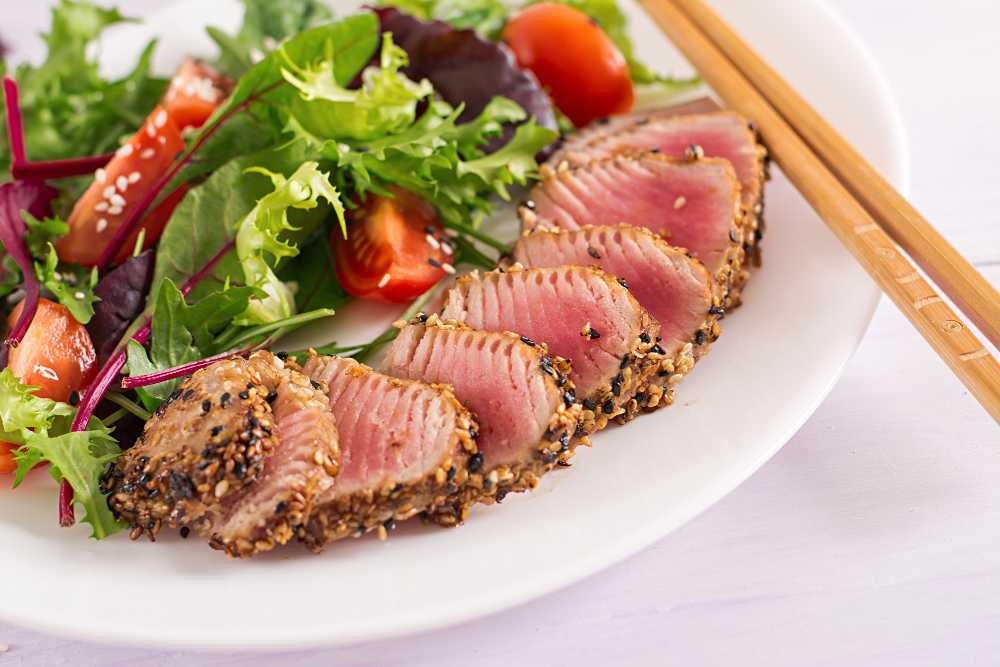 The two main issues are mercury concentration and sustainability regarding tuna. In addition, there are certain possible drawbacks of canned tuna in particular, such as the fat and sodium level and the safety of a can itself.

Mercury is a heavy element frequently found in fish due to water contamination. High mercury exposure has been found in studies to produce significant health problems in people, including central nervous system abnormalities.

The nutritional composition of canned tuna can vary depending on whether it is packed in oil or water. Canned tuna packaged in oil has a higher calorie and fat content than canned tuna sealed in water.

Tuna, both water-packed and oil-packed, is rich in proteins in saturated fat. On the other hand, canned tuna packed with oil has a greater calorie and total fat content.

If you want to reduce weight, canned tuna is an attractive choice because it is low in calories and high in protein. Protein-rich diets have been linked to weight loss benefits such as enhanced feelings of satiety and decreased cravings.

Because tuna consumes other tiny fish that may already be tainted with mercury, this metal may accumulate and concentrate in tuna. As a result, tuna has more mercury than other forms of fish, such as salmon or tilapia.

What Has Less Calories Chicken or Tuna?

Chicken and tuna are both lean, low-calorie sources of protein that fulfill most people’s definitions of a balanced diet. However, calories and protein aren’t the be-all and end-all of nutrition.

It’s important to know what’s in your sandwich if you have special dietary needs. So we evaluated the nutrition in four-ounce portions of canned tuna and chicken breast to discover which one was the healthiest.

Low iron is pretty prevalent in the population, and tuna might assist if you fail to acquire enough in your diet. On the other hand, chicken is a better option if your iron levels are adequate, but you may benefit from extra zinc, phosphorus, and potassium.

In the end, the decision between tuna and chicken comes down to personal preference. Whatever you choose, you’ll get plenty of lean, low-calorie protein, as well as vitamins and minerals in abundance. You’ll always know which is best now that you’ve learned the intricacies of chicken and tuna nutrition.