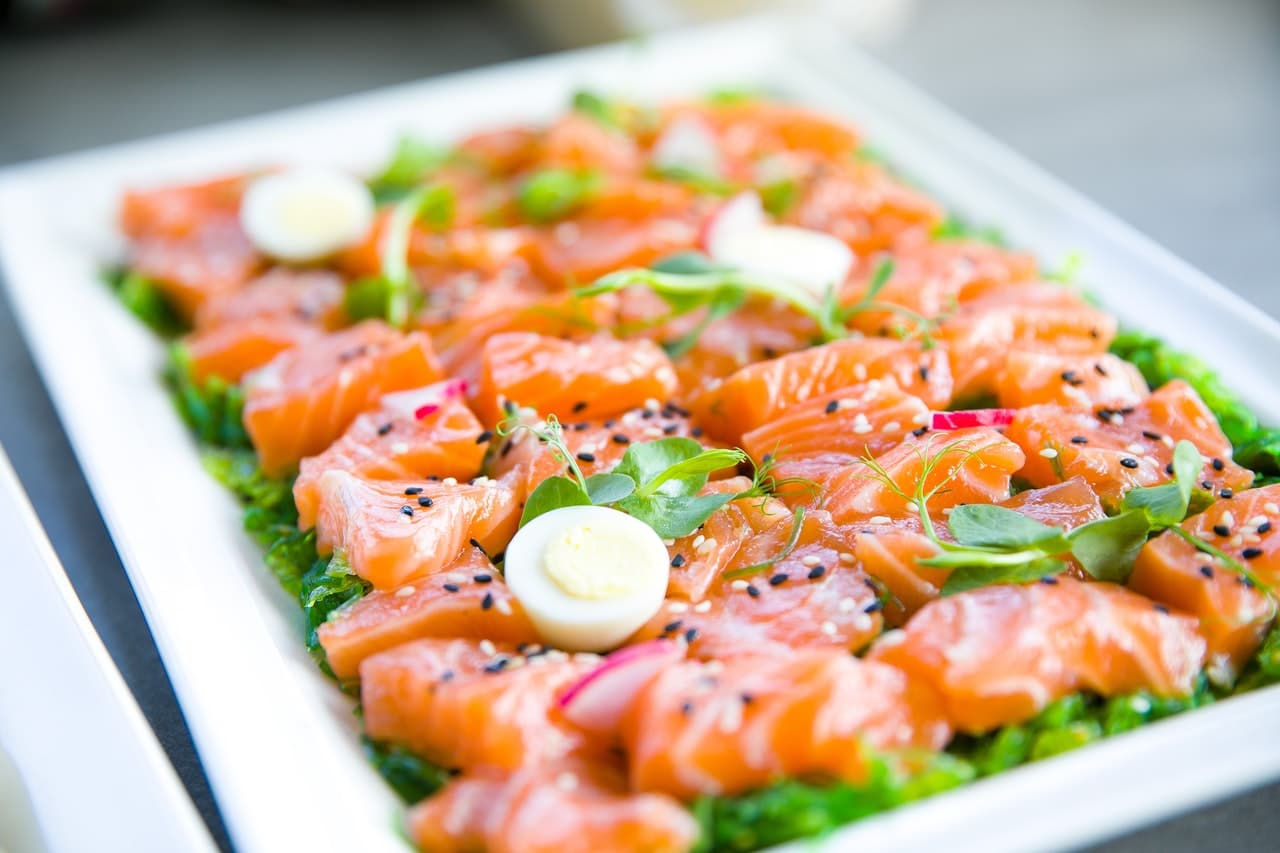 Are you thinking of eating raw or undercooked salmon?

Yes, you can eat fresh or uncooked salmon. However, there are some primary considerations to keep in mind if you want to maintain your health while experimenting with raw fish. In Japan, it is commonplace for people to eat raw fish slices in sushi. They can do this because the sushi restaurants and sushi chefs in that country are highly trained in the sensitive art of keeping fish fresh and safe for consumption while in a new state.

You can eat grocery-bought salmon fresh if you can find in the package an indication that the manufacturer has prepared the salmon as “sushi-grade salmon,” which is safe for consumption in its raw state. If you can’t find this on the label, look for “flash frozen” or anything similar, which would indicate that the fish was frozen immediately after the catch, and thus, there is a much lower chance that there are bacteria on the surface of the fish.

There are two kinds of commercial salmon that can be eaten raw. The first type is flash-frozen salmon. It is a well-known fact that freezing salmon for 24 hours will kill most harmful parasites that pose a threat to human health. Flash-frozen salmon reduces your chances of picking up worm eggs, which can cause a parasitic infection.

The second type of fresh salmon that is safe to eat is farmed salmon. Farmed salmon are guarded and fenced off from the rest of the wild salmon population, so the chances of consuming food that has parasites in them are low.

Farmed salmon are also continuously fed so they would easily attain their full size in captive conditions. This means, for the most part, farmed salmon would not be interested in smaller prey that may harbor bacteria and parasites.

Is It Safe to Eat Undercooked Salmon?

The USDA generally recommends cooking all kinds of animal protein, including seafood and fish. Fish and shellfish must be cooked at 145°F or 62.8°C to be considered safe for consumption. We recommend using an instant-read thermometer to get a fast and accurate reading when you cook fish.

If you have sushi-grade salmon or flash-frozen salmon, the chances of getting a parasitic infection are low, so theoretically, you can prepare sushi from that kind of fresh salmon. Undercooked is fine as well, as long as the fish is handled correctly. However, if you plan to cook your salmon, why not just cook until it reaches the safe internal temperature?

There are some risk factors associated with eating all sorts of uncooked and undercooked fish, not just salmon. All kinds of fish can harbor different pathogens like tapeworms and bacteria.

Cooking kills these pathogens, which would explain why the general health recommendation is to cook your food well to avoid run-ins with parasites. Raw salmon has been known to carry helminths. Helminths are parasites that resemble worms. Salmon can also harbor the eggs of the broad tapeworm. These can grow up to twelve meters inside the human intestines, and they are not quickly expelled.

Other kinds of tapeworms thrive in salmon caught in Japan and Alaska. These have also been found in the intestines of people living in the areas who habitually consume the fish.

Other potential infections are caused by various human pathogens, including the norovirus, Vibrio, salmonella, hepatitis A, e. coli, etc.

Is Salmon Better with or Without Skin?  Is salmon skin good for you?

Eating salmon skin is right for you, period. Salmon skin doesn’t have the kind of attention it deserves because the plate’s queen has always been the fish’s meat. They are generally speaking. However, it is good to eat salmon skin because it contains many omega-three fatty acids, protein, and good fats. There is also a right quantity of trace nutrients in salmon skin like phosphorous and niacin. Salmon is a good substitute for heavier and fattier meats derived from terrestrial animals.

Due to the conditions of the world’s oceans, we need to consider the fish skin, in general, contain trace amounts of mercury and other heavy metals. With this in mind, we recommend that you eat salmon skin and other kinds of fish skin, but do so only conservatively.

Please don’t overdo it. If you want salmon taste so much, eat more of its meat and limit the skin’s consumption. Atlantic Ocean salmon has been known to have the highest doses of heavy metals and pollutants. Knowing where your fish comes from is essential if keeping yourself safe from the potential after-effects of consuming heavy metals found in seafood like shellfish and wild-caught fish like salmon.

How much protein is in salmon? How Many Grams of Protein Are in A 6oz Piece of Salmon?

Six ounces of Wild Alaskan salmon (grilled) provides 270 calories of energy, 13 grams of fat, and a stunning 32 grams of protein.

Consuming fresh, wild-caught or farmed salmon can be safe as long as the package states that the fish was blast-frozen or flash-frozen before packing. Blast-freezing reduces the chances of landing a nasty tapeworm infection. However, other types of salmon should be cooked thoroughly first before you chow down.