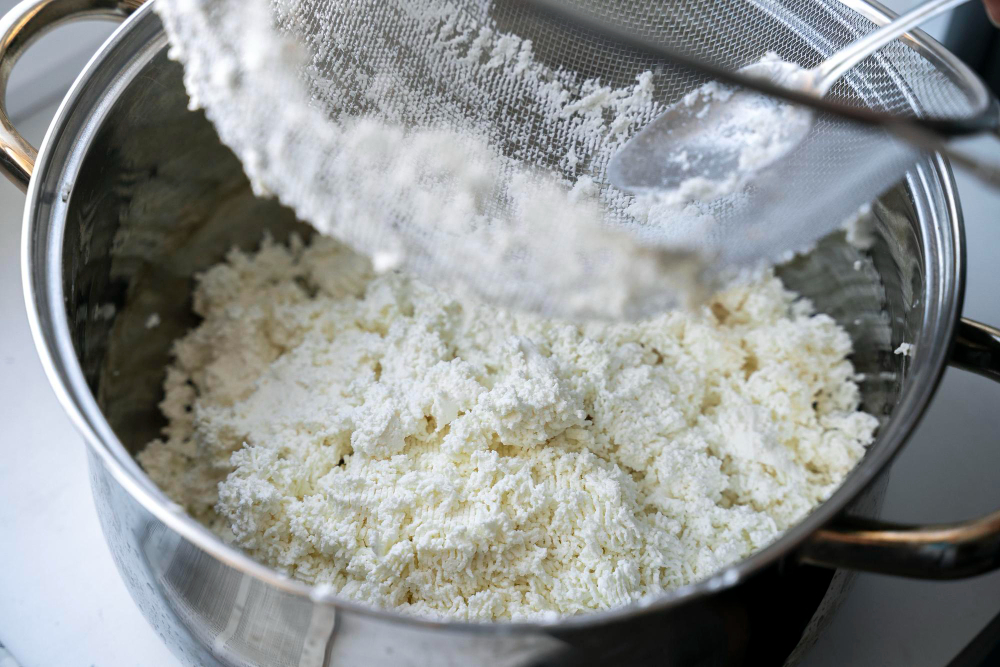 Adding bacteria culture and powdered rennet to warmed goat’s milk results in the cheese known as chevre. Lactose is found in milk and converted to lactic acid by the culture, and rennet is used as a coagulant to put the cheese in place.

During this procedure, the curds and whey separate. Next, the cheesemaker removes the curds and then strains the curds even more to produce a creamy, white goat cheese that is thick and rich in flavor.

Adding crumbled chevre to any salad is a terrific idea, and it is prevalent on salads with sweet fruits like apples or cranberries because of the chevre’s acidic, tart flavor. For example, the crumbled chevre on top of a beet salad is tasty.

Chevre comes in a plethora of variants, most of which are differentiated by the age of the cheese. When chevre is young and fresh, it is white, moist, and mild; as it ages, it becomes yellow, drier, and more crumbly, with a rind; and it tastes tangier.

Does Goat Cheese Melt When Heated?

Goat cheese baked in the oven does not spread like mozzarella does when heated. As a result, it may be necessary to spread a thin layer of goat cheese over the surface of the pizza rather than sprinkling it on top.

Only one type of goat cheese can be manufactured from goat’s milk: soft, fresh goat cheese. Compared to mature cheeses, these cheeses are sweeter and softer in flavor. Semi-soft, surface-ripened, and hard-aged cheeses, on the other hand, are best eaten out of hand rather than cooked.

All fresh cheeses melt differently than firm cheeses because of their higher moisture content. For example, soft, fresh goat cheese will not brown like a Swiss or a Parmesan cheese because it isn’t aged long enough.

Goat cheese’s ability to retain its shape when heated makes it an ideal filler for rolled chicken breasts. However, in reality, the shape of a hot piece of goat cheese is deceptive.

Tossing boiling pasta and goat cheese transform the cheese from a clumpy mess into a silky smooth sauce in minutes.

When preparing with goat cheese, keep in mind that the saltiness of international cheeses tends to be higher than that of domestic cheeses. Adjust your spices to consider this.

When heated, goat cheese softens, but it does not melt like many kinds of cheese. A softer, more fluid texture can be achieved by baking harder goat cheeses with rinds.

Soft, fresh goat cheese will not brown like a Swiss or a Parmesan cheese because it isn’t aged long enough. So although the cheese’s inside is warm and meltingly smooth, a few minutes of broiling a crouton with a round of goat cheese won’t modify the cheese’s appearance much.

In the United States, the mass-produced French Montrachet goat cheese is the most widely accessible fresh goat cheese option. Montrachet is a valuable ingredient in many culinary recipes despite its lack of individuality.

The selection at the supermarket is likely to be more limited, with only one or two varieties available. It’s always better to go for anything that appears to be handcrafted rather than something that appears mass-produced.

Because it is acid-coagulated, goat cheese does not melt. Casein proteins bond tightly when acid is applied to form cheese. These relationships are extremely tough to sever.

If you heat other cheeses, particularly younger cheeses, the loosely attached proteins dissolve and melt into the smooth, beautiful pizza topping you desire. Unfortunately, goat cheese’s proteins are too closely connected for this to be conceivable.

Will Goat Cheese Melt in the Oven?

Unlike cheddar or mozzarella, Goat cheese does not melt into a puddle when baked in the oven. The breadcrumb-coated rounds should be refrigerated before baking so that the crust has time to crisp and turn brown without overcooking the goat cheese.

Even though it doesn’t melt as quickly as cheeses like brie or fontina, it will still melt when added to hot spaghetti or soups. Many recipes call for cream cheese, but soft goat cheese works just as well.

Some of the most renowned restaurants in the United States incorporate goat cheese in their dishes. In addition, wine and microbrews from the area go great with fresh goat cheese. The demand for goat cheese continues to grow as more and more people discover its many virtues.

All goat cheeses can turn gritty and crumbly when heated to a temperature beyond their optimum melting point. Therefore, keep it at room temperature before using it in cooking. When not in use, store cheese in its original packaging, plastic wrap, or wax paper to keep it fresh.

Low-moisture cheeses, which are often drier, crumblier, and harder, require higher melting temperatures due to the concentrated creation of protein bonds that are more difficult to break down.

Essentially, you’re making the milk proteins and lipids more malleable and usable by melting cheese. During heating a cheese, the protein matrix collapses, promoting the flow of the cheese into a more liquid form that is more easily spreadable and spreadable.

When it comes to melting, a greater moisture cheese will melt more quickly and hence more cohesively with itself, whereas a hard cheese like parmesan will melt as separate shavings but not become a melted mass like a semi-hard Gruyere or Cheddar.

The acid level of crumbly cheese is substantially higher than that of most other cheeses; hence it does not melt quickly. So if you’re looking for a versatile cheese for your liking, this is a great option.

As a last resort, you may try pairing the cheese with something that would help to counteract the calcium’s effect on the cheese and add extra moisture to it. For example, a combination of lime juice and white wine may be able to soften the cheese.