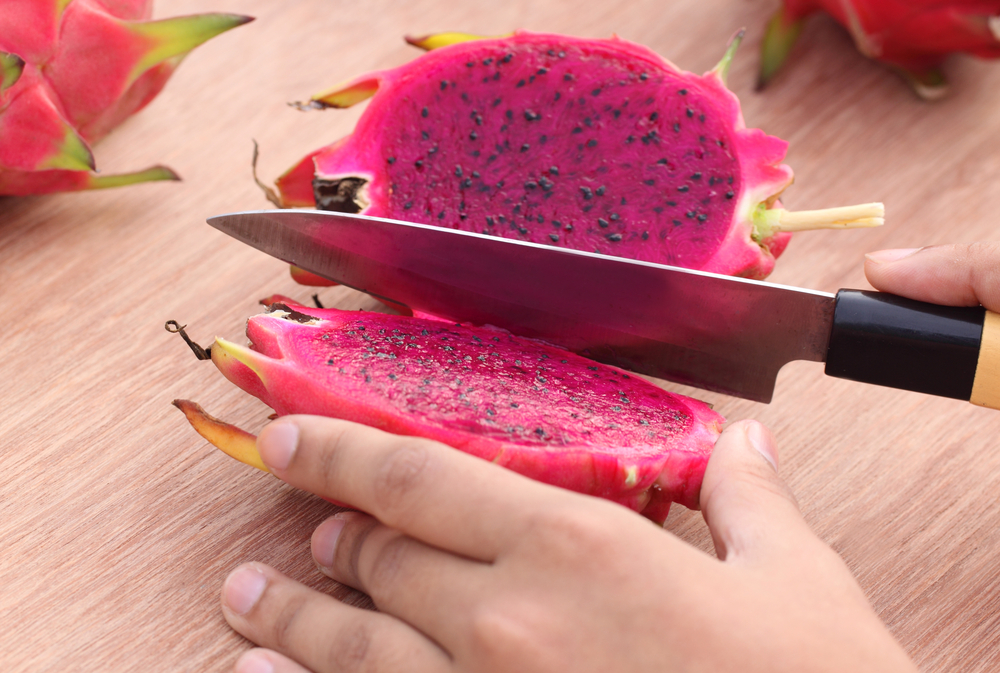 The pink dragon fruit may grow on tall cactuses, and these cacti are frequently observed climbing up trees, fences, and even walls. However, it can only be found in tropical regions, such as Florida, Southeast Asia, the Caribbean, and other similar locations. The distinctively red flesh of the red dragon fruit sets it apart from other dragon fruit species.

It’s possible that you already know this from your experience with other fruits, but the darker the color, the higher the concentration of antioxidants that will be found in the fruit itself. To put it another way, dragon fruits with red flesh contain more antioxidants. In addition, the red form has a higher concentration of vitamin C.

It has been established that the flesh of the pink dragon fruit has a taste that is even sweeter than that of the white dragon fruit and has an even higher nutritional value. Another interesting fact is that it outranks other fruits like grapes and beets in terms of the number of anthocyanins it contains.

Why Are Some Dragon Fruits Pink?

Many different species of dragon fruit are cultivated in many regions, from Asia and the Middle East to Central and South America. Taiwan, Malaysia, Sri Lanka, the Philippines, and Thailand cultivate the fruit, although Vietnam is the most prolific producer in Asia.

The perpetual dragon fruit is a climbing cactus plant that can live for as long as twenty years if cared for properly in tropical lowlands where it thrives.

What should dragon fruit look like inside? The semi-prickly plant, if left unpruned, can develop long, meaty, triangular stem segments. A trellising system is necessary for commercial orchards due to the plants’ vertical development and aerial roots.

Large quantities of pink-skinned dragon fruit species with deep to light pink flesh are grown in Nicaragua and Ecuador. In addition, a yellow-skinned cultivar with white flesh is grown in Ecuador and produced seasonally in Mexico, Costa Rica, Colombia, El Salvador, and Guatemala.

The dragon fruit’s flesh can range in color from white to hot pink or even deep red, and it contains tiny black seeds. White dragon fruits often have a mild flavor, but fruits with deeper, redder flesh might be sweeter and juicier.

Can Dragon Fruits Be Pink?

All these fruits are classified as red dragon fruits; however, their interior colors range from deep purple to bright pink.

Which dragon fruit is white inside? We offer a few pointers that can help you recognize the difference between red dragon fruit and white dragon fruit. Of course, it is always helpful to  So the question now is, how can you tell the two apart?

One of the most well-liked dragon fruit variants is the pink one, also called pink pitaya. Unfortunately, some people mistake pink dragon fruit for red or purple.

Like other dragon fruits, pink pitayas originate from cuttings of long green vines. However, it is said that the pink variant is one of the rarest tropical fruits ever observed due to its stunningly unusual appearance.

The Hylocereus Polyrhizus and Hylocereus Undatus species include pink pitayas in their genetic makeup. Therefore, tropical and subtropical climates are suitable for growing this fruit.

White pitaya is commonly referred to as the pink-skinned kind with white meat. In addition, the pink dragon fruit, which has white flesh, is sweeter than the green and yellow types. The pink pitayas, with their white flesh, are the most extensive and sturdiest in the family.

Which Dragon Fruit Is White Inside