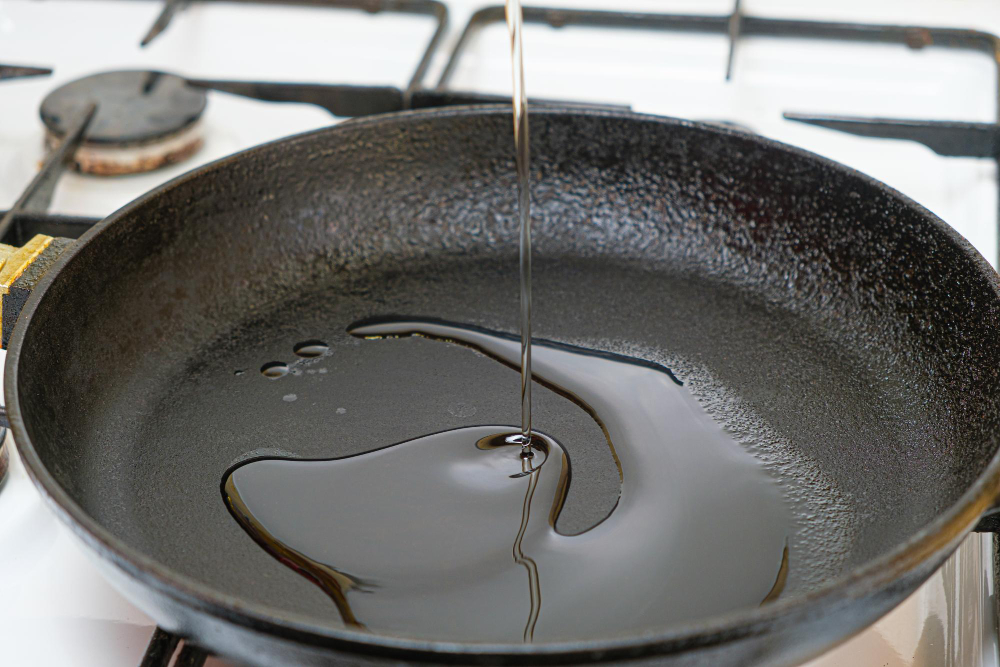 Avocado oil brings a high smoke point, making it an excellent seasoning oil. The only drawback to avocado oil is the cost, which is more than most other oils.

When you season cast iron, you’re protecting the surface against rust and making it nonstick and versatile. For example, if you use a well-seasoned cast iron pan, you shouldn’t have to scrape off any stuck-on food after baking a cake or searing a steak.

Seasoning is the baked-on layer of oil or fat on cast iron that protects your pan and provides a nonstick coating. Pre-seasoned cast iron skillets have already been through the seasoning process and have at least one layer of seasoning baked on them when you buy them.

Polymerization creates the “seasoning” on your cast iron cookware. During polymerization, the proper oil or fat is heated in a pan until it forms a hard black surface, which is when the polymerization process begins.

Smoking is perfectly OK, and it indicates that the seasoning is working. However, continuous exposure to high temperatures will cause your avocado oil to burn. The pan will need to be re-seasoned if this happens to you. Also, the oil’s bitterness after it has burned off will transmit that flavor to the pan.

Unless you season your cast-iron cookware, you’ll have trouble getting your meal out of the pan once it’s been cooking for some time. To help polymerize and oxidize, avocado oil contains a high percentage of unsaturated fats. This results in a highly durable oil seasoning coat for cast iron.

Baking oil onto a cast iron by a process known as polymerization is meant “seasoning.” Cast-iron cookware absorbs oils from the food and forms a smooth layer using the right cooking fats.

Any cast-iron pan, pot, or skillet has microscopic pores that can be filled with cooking oil. After heating your cast-iron pan and cooking the oils into it, you’ll have a smooth cooking surface.

Ensure the oil you use for seasoning has a higher smoke point than the cooking temperatures you intend to use. For example, if your skillet is searing at 400 °F, don’t season it with olive oil with an impressive smoke point of 350 °F.

When it comes to creating the perfect cast iron seasoning, polymerization is the process that needs to take place. Avocado oil, for example, has a more awesome content of saturated fats and should be avoided.

When it comes to seasoning cast iron, nothing beats avocado oil. In addition, the smoke point of refined avocado oil will be significantly greater than that of an unrefined variety.

Cooking with cast iron opens up a wide range of possible menu items, and the oil you use should do the same. The smoking point, flavor, constant seasoning, and clean-up are all essential considerations when deciding which oil to utilize.

Avocado oil, as well as seasoning conditioners and oils made by cast iron manufacturers, are the best oils for seasoning cast iron. Polymerization can only occur if the seasoning oil for cast iron has a high smoking point.

For a nonstick surface, cast iron must be seasoned. Seasoning coats the surface with an invisible coating of polymerized fat, making it less likely to cling or rust when it comes into contact with water and other liquids.

Polymerization, which is the process of oil being baked onto a cast iron’s surface, requires a high smoke point. Consequently, the iron doesn’t rust and becomes nonstick.

In addition to smoothing the surface, the oil coating has another purpose. It takes a lot of time and effort to get cast iron to become nonstick.

After cooking using avocado oil, the bottom of the pan is always covered in oil. Most other oils evaporate “simply like water,” but if you use the remaining oil to flavor a dish, it’s a culinary delight.

Can You Use Avocado Oil to Clean Cast Iron?

To keep food from adhering to a cast-iron pan, brush the pan with oil before adding the ingredients. As a result, the food doesn’t adhere to the pan and develops many layers of seasoning.

If the oil you’re cooking with has a smoke point lower than the temperature you’re cooking at, then you can use it. Avocado oils are excellent culinary oils that are great for anything from sautéing to baking. Use them in any recipe you choose.

Any oil you use must be heated to its smoke point before cooking, regardless of the oil you choose. Polymerization occurs when the oil exceeds the smoke point, a chemical reaction. As a result, a seasoning film forms on the pan’s surface, holding the oil firmly in place.

What Oil Is Best for Seasoning Cast Iron?

The only thing they all have in common is that they all require the addition of some fat to the food. That’s all there is to seasoning a cast iron pan.

Once the metal has been coated with an oil coating, heating causes the oil’s fatty acids to be broken down and reformed into larger molecules that connect the metal. Seasoning is a simple process.

Seasoning provides a natural cooking surface that is easy to remove to keep your pan from rusting. If you don’t season your cast-iron pans before using them, you’ll have difficulty getting your meal out of the pan.

At least 20 degrees over the oil’s smoke point should be exceeded throughout the seasoning process for cast iron. Polymerization of the oil will help you obtain the barrier you’re aiming for.

Cast iron seasoning coats made from avocado oil are extremely durable because of the oil’s high quantities of unsaturated fat. Canola oil is an excellent low-cost alternative when seasoning your cast iron pan. Impartial flavor and a high smoke point make it a good choice.

Can You Use Fruit-Fresh On Avocado