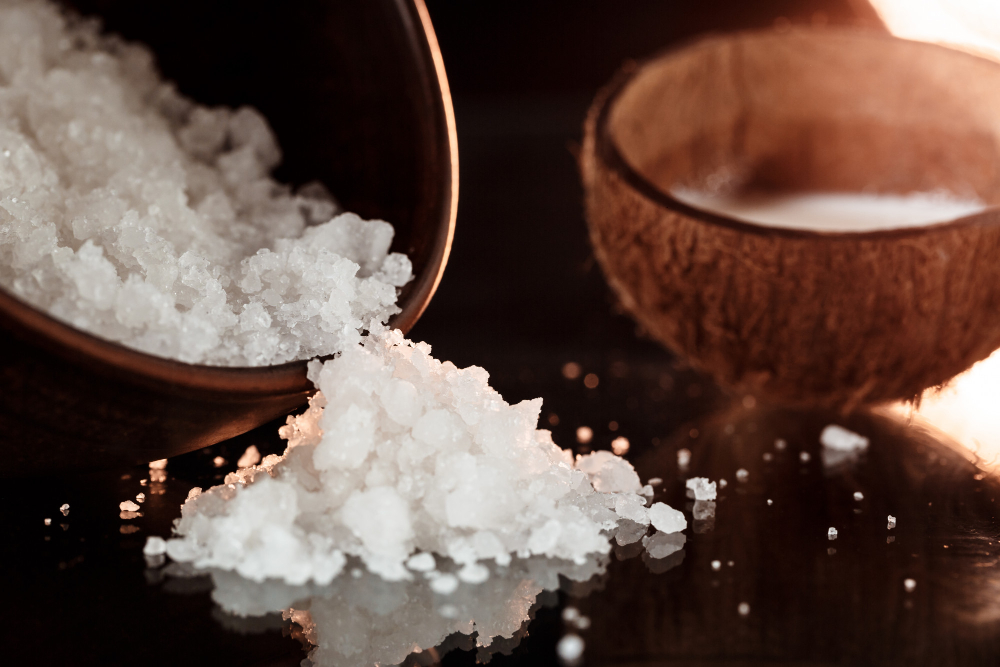 In addition to flavoring food, salt is also used to improve various foods’ structure and shelf life. However, when people talk of food-grade salt, they usually think of vacuum salt or regular kitchen salt.

A food-grade salt, this product can be used for everything from culinary to food processing. An anti-caking agent prevents lumping and maintains the product’s ability to flow freely. The food manufacturing, take-out, and fast-food industries will find this product ideal.

However, the composition is different even though vacuum salt shares many molecules with sea salt and fine sea salt. In addition, as a result of its extraction technique, sea salt contains additional minerals and trace minerals that are essentially absent in vacuum salt.

It’s possible to use sea salt in a wide range of food applications because of its inherent grain diversity. To get coarse salt from fine salt, vacuum salt is put through an additional compacting process. In most cases, an anti-caking agent is included.

In terms of product and use, vacuum salt can be substituted by high-quality sea salt. In addition, vacuum salt is utilized as conventional kitchen salt because of its proximity to vacuum salt producers, whereas Mediterranean Sea salt producers are frequently located far away.

What Is Vacuum Salt?

In most saltshakers, you’ll notice granulated white salt or table salt. Underground salt deposits are the most common source of table salt. Other minerals are removed during the processing stage. For example, iodine, which is critical for a healthy thyroid, is often added to table salt.

Traditional household salt, as well as vacuum salt, is mined from salt layers that are found in the ground. Water is poured into the salt layer to extract the salt. In the end, the salt solution is brought to the surface and heated until it crystallizes into fine salt grains.

The brine is first chemically purified to eliminate any undesired minerals to produce vacuum salt. This is because this salt is mostly used in the chemical sector. For example, the chemical industry utilizes vacuum salt manufacturing to manufacture chlorine and lye in less than 60 percent of cases.

This method is not only polluting in terms of chemicals, but it is also extremely energy-intensive. In addition, vacuum salt production has a higher carbon dioxide footprint because of the soil degradation caused by salt mining in the underwater soil layers.

Consume salt in moderation, whichever variety you want. According to the Dietary Guidelines for Americans, salt consumption should be limited to no more than 2,300 milligrams per day. This is because table salt has about the same amount of sodium as a teaspoon of it.

Is It Safe to Eat Vacuum Salt?

Saltiness is one of the most basic individual tastes, as it is generally required for survival. In addition, salting is an important way of food preservation since vacuum salt is among the oldest and most used food seasonings in the world today.

As an electrolyte and osmotic solute, sodium is vital to human health. Excessive salt intake may increase the possibility of cardiovascular illness, such as hypertension in adults and children. Such salt-related health impacts have long been investigated.

Due to its association with elevated blood pressure and hypertension, salt has received some bad press recently. According to doctors, salt in processed foods is more dangerous than salt in our usual meals. Therefore, people with high blood pressure must avoid eating junk food and processed foods because they contain a lot of sodium.

For a long time, the most prevalent salt form has been table salt, sometimes known as vacuum salt. Natural sea salt evaporates and is heated at extremely high temperatures to create vacuum salt. Most of its advantages are lost in this process. The remaining impurities are subsequently eliminated during the purifying process. In this process, even the minerals vital to its chemistry are removed. Additives such as magnesium carbonate and sodium aluminosilicate are used to prevent clogging.

What Is Pure Dried Vacuum Salt Used For?

Pure Dried Vacuum Salt (PDV) is a fine white-free-flowing salt prepared to a high specification and assured by higher-level accreditation. It is utilized in animal nutrition water treatment and is manufactured following the strictest food hygiene regulations.

Sedimentary deposits, leftover from centuries of sea and lake evaporation, are where salt is mined in other parts of the world. Depending on the source, rock salt can be mined straight from the ground, or water can be pumped up into the deposit to remove the salt.

Mechanical evaporation of brine can be used to purify salt in both cases. Open pans were heated to speed up the evaporation process in cleansing rituals of old.

It’s also possible to use vacuum-based approaches in the process. Most impurities, including magnesium and calcium salts, are precipitated out of the raw salt through chemical treatment. Then comes a series of evaporation stages.

Vacuum pan evaporation mixed with seeding the solution with cubic crystals is used to produce a grainy-type flake in some salt production. Indian salt trees and other tree ashes are used by the indigenous Ayoreo people of the Paraguayan Chaco to make salt by-products.

Also, PDV can be utilized in the food business to preserve and enhance flavor. In the hospital, it can be used to treat bacterial infections, and in the pond, it can be used at low concentrations to reduce nitrate levels.

High-purity, fine cubic-crystal salt is what we’re selling here; it’s been processed to remove all the salt’s naturally occurring compounds and contaminants. In terms of purity, quality, and efficacy, PDV is an absolute necessity in the cheese-making process and a key ingredient in numerous traditional curing recipes.

Can You Put Fizzy Drinks in a Vacuum Flask