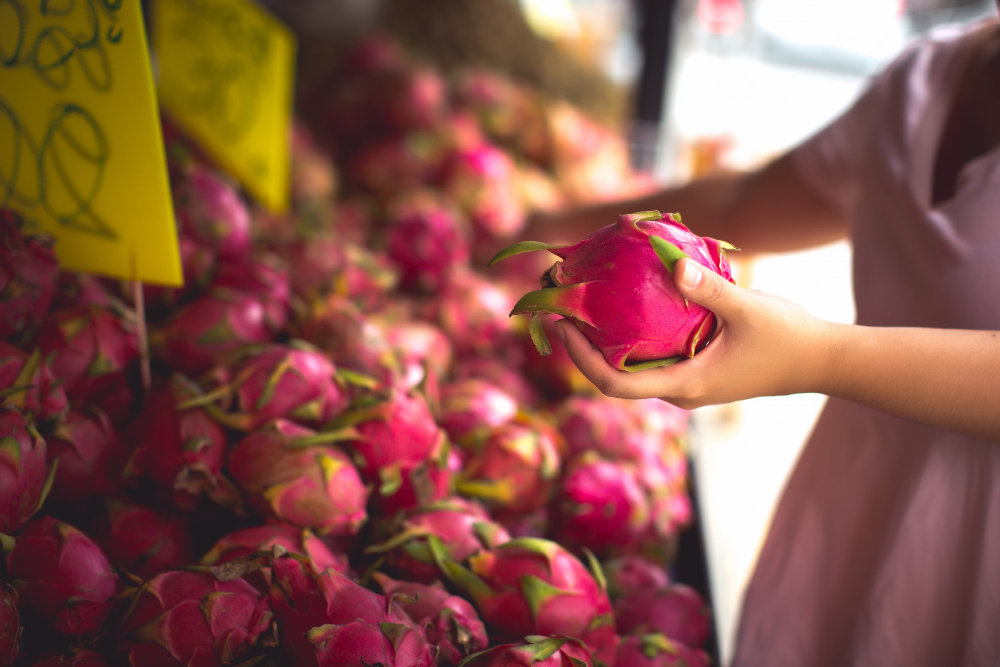 Since the 1990s, dragon fruit has been available for cultivation in private gardens. Because it was profitable and required fewer inputs once established, it quickly rose in popularity among farmers. This contributed to its widespread adoption.

In addition to the fact that it is thought to have some therapeutic benefits, dragon fruit also has many applications in the food and beverage industry. For example, it is made into jam, juices, wine, and vinegar.

In recent years, dragon fruit has seen a meteoric rise in demand from consumers. Because of this fruit’s reputation as one of the most nutrient-dense fruits on the market, dragon fruit has quickly established itself as the fruit of choice for consumers concerned about their health.

In addition to many other reasons, the nutritional benefits of dragon fruit were a significant factor in the fruit’s meteoric rise in popularity. Furthermore, due to the continuous growth in demand for dragon fruit, there has been an uptick in the number of people who believe the fruit will eventually be grown commercially in the country.

For the most part, these nutrients are recognized for the antioxidants that they contain. Antioxidants are known for their ability to aid in the prevention of the development of free radicals, which can lead to cancer. In addition, those who struggle with diabetes and high blood pressure have found relief from their conditions when they consume dragon fruit daily.

Can I Eat 1 Dragon Fruit A Day?

Research suggests that eating one dragon fruit is harmless, although some people may be hypersensitive to dragon fruit. Swelling of the tongue, hives, and vomiting are possible symptoms of an allergic reaction, but extreme reactions like these seem extremely rare.

Consuming a large quantity of red dragon fruit might cause your urine to turn a pinkish or scarlet shade. This symptom usually isn’t as severe as it seems at first. The same can happen if you eat a lot of beets. Urine should revert to its standard color when the fruit is eliminated from the body.

Before buying, it’s wise to give a dragon fruit a gentle squeeze. The material must be flexible without being flimsy. Avoid any fruit with bruises or dried-out leaves, as it is likely past its prime. If pressing it provides a complex result, let it sit on the counter for a few days to ripen.

There are a variety of methods to cook using dragon fruit. It’s best when combined with other tropical fruits like mangoes and bananas in a fruit salad. Next, prepare the salsa using a knife. Churn it to make ice cream. Put in some water or juice and give it a good squeeze. Adding it to Greek yogurt is a great idea. Finally, mix the frozen fruit into a smoothie.

The widespread claims that dragon fruit helps treat diabetes, pre-diabetes, high blood pressure, high cholesterol, and obesity are not supported by adequate data. Flowers have multiple applications, such as a vegetable as a tea additive.

When Did Dragonfruit Become Popular?

The French introduced dragon fruit to Asia through Vietnam in the early 1800s, although it is originally from Mexico, Central America, and South America. As demand keeps rising, commercial production of dragon fruit is increasing in the United States.

Dragon fruit is at its peak freshness in the summer. The best months for most species are August and September, but Selenecereus megalanthus variants bear fruit from November through February.

Most dragon fruit harvests go directly to the fresh market, where they may be found in grocery shops and farmer’s markets. At farmers’ markets in 2011, growers might fetch $7.50-$8.00 per pound for their dragon fruit.

It’s possible that the fruit’s worth could be increased through further processing into various goods. For example, the unopened flower bud can be prepared and eaten as a vegetable, and the juice of the red types can be used as a natural food colorant and dye.

What Is The Real Taste Of Dragon Fruit?

Dragon fruits, despite their unique look, taste somewhat mild and unremarkable. Therefore, even if you get your hands on a perfectly ripe dragon fruit, it may not have a memorable flavor. Some people compare the flavor to a watered-down kiwi, while others say they taste more like diluted melons.

In addition, the skin should be smooth and, depending on the kind, either a brilliant pink or another hue. Finally, if you squeeze a dragon fruit with a texture similar to mush, you should avoid buying it because it is probably past its prime and should not be consumed.

When the dragon fruit is fully ripe, it can be cut in half and eaten right out of the peel. However, the fruit is at its peak flavor when it is just beginning to mature. Dragon fruit can be used in fruit salads even when utterly ripe because it keeps its shape when cut into slices or cubes.

Where Is Dragon Fruit Most Popular?

There are health benefits to eating dragon fruits despite their less-than-appealing taste, as they are rich in omega-3 fatty acids and fiber. Smoothies and fruit salads are popular ways to consume these fruits because of their health benefits and added flavor.

There are three main types of dragon fruit (or pitaya). To begin with, their skin color may be yellow or red. The flesh color of the yellow-skinned form is white, whereas that of the red-skinned variant ranges from white to crimson.

No matter what kind, you’ll get a mellow fruit with a flavor combining watermelon, berries, and kiwi elements. Choose fruit with a shiny, beautiful peel that gives just a little when gently squeezed for the finest eating experience. Spots of brown or dryness indicate that the dragon fruit is overripe, while a substantial texture indicates that it is unripe.

The cool air will slow the fruit’s ripening process, and you’ll be able to enjoy it at its peak example illustrated a few days later. Additionally, the sealed container will prevent this perishable fruit from being affected by the other flavors in your refrigerator. As a result, ripe dragon fruit can be kept your dragon fruit the fridge for up to a week.

Why Do Cats Love Dragon Fruit