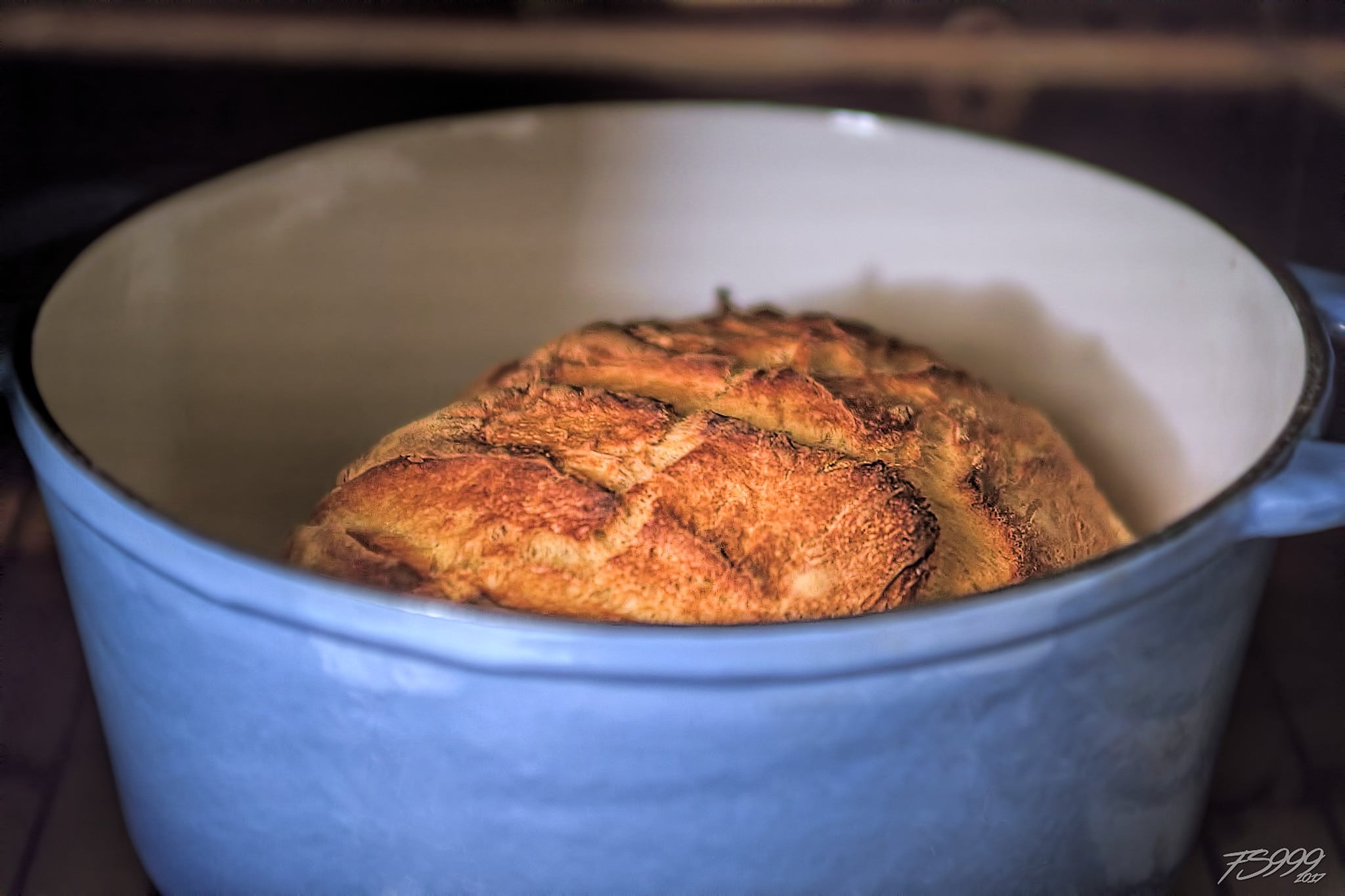 Making crusty, crispy, and golden loaves of bread can be done with a lidded Dutch oven. Gluten, a complex protein structure found in baked bread and pastries, can only be produced with lots of proper kneading. The results give a moist interior with a crusty, flaky exterior.

Dutch oven technique, a known method used by professional cookers, uses the Dutch oven’s compressed heat to eliminate the need for kneading. Heat collected from the enclosed Dutch oven is enough to turn your dough into an amazing leavened bread.

Why Do You Bake Bread in a Dutch Oven?

Unlike baking pans and cookie sheets, baking your bread inside a Dutch oven provides insanely better results. Bread and pastries cooked inside the Dutch oven still produce a crunchy exterior we loved on bread while retaining a fluffy bread inside. Unlike loaves of bread baked in the open area, the crust tends to make the insides tough, burnt taste.

Like steaming, baking still requires moisture to prevent your dish from releasing too much vapor. Once the bread reaches its limit, it will start pulling away from its moisture that can cause your bread to dry up. Dutch oven prevents this from occurring by providing an enclosed space for your dough to cook completely without losing too much moisture.

To bake your bread perfectly with a Dutch oven, your must preheat your Dutch oven first. Once through, slowly slip your risen yeast dough inside the heated cookware before closing the lid. Inside, the lid is producing steam that provides the needed moisture preventing the bread from overdrying.

When the Dutch oven is preheated empty, this can serve as your steam-injected oven. The enclosed vessel can distribute heat more evenly than conventional oven types—transforming the dough into the bread we all love. Crisp ridges are also formed, producing your simple baked bread into an artisan level of cooking.

Steam also allows the scores placed on the bread to open up wonderfully than those baked without an enclosed panel. It allows the dough’s surface to cool for a longer time, allowing yeast to continue reducing starches found in flour into simple sugars. Simple sugar found on starch produce this golden exterior and the right amount of sweetness.

What If I Don’t Have a Dutch Oven for Bread?

You can still bake your bread and pastries without a Dutch oven. Placing your bread on the typical cookie sheet may produce lackluster bread. However, it will not produce the same crusty bread recipe that can be done using the Dutch oven technique. Good thing, baking your bread with a Dutch oven can be substituted with other cookware. Creating your best-tasting bread doesn’t require going back to basic cooking.

A Dutch oven is a useful baking tool since it provides steam to circulate your dough. Steam is responsible for keeping the moisture right on track by keeping the loaf outside to set before the bread rises. Since the crust formation is slowed down, steam helps the dough to rise properly without the chance of producing stiff crust.

This method’s results are a thin outer crust with a developed deep brown color without burning your food. This means that if there are certain cookware that can emulate steam, you can have your makeshift Dutch oven at home. There are three existing methods of creating crusty-flaky bread without a Dutch oven:

You can use your baking casseroles to create your makeshift Dutch oven. Allow the pot to reheat until it is good to go. Follow the same procedure used in the Dutch oven method, replacing the cast-iron lid into a baking sheet. You can also use an oven-safe bowl that is slightly larger than the baking casserole.

Option 3: Pizza stone and a dish filled with water

Preheat your oven from 45 minutes before baking—place your bread inside a pizza stone or baking steel. Place an oven-safe dish filled with water at the bottom layer of the rack to create steam. Like a Dutch oven, a pizza stone is a good heat conductor. It can distribute heat evenly to produce uniform baked goods.

Is It Better to Bake Bread in a Dutch Oven?

Steam is essential in bread production. Yeast found in bread accelerates faster once it is placed inside the oven. Steam works by surrounding the loaf to retain its softness longer, allowing yeast to work at the right pace. This produces a well-refined bread with a crispy, browned exterior.

By this rate, the enzymes of the steamed bread had already been converted into starches. These starches are the main source of simple sugars, elevating the overall bread flavor, texture, and aroma. If you want to bake artisan-level bread and pastries, cooking it through the Dutch oven technique works efficiently.

Better baking results are produced if you bake bread inside a Dutch oven. Unlike Dutch oven, regular ovens vent—making steam difficult to keep inside. If placed on a hot, enclosed surface like a Dutch oven, it can trap humidity inside. This produces a higher internal temperature essential to create webbing and sheen for the bread’s crumb.

Can Saucepan Go in Oven?