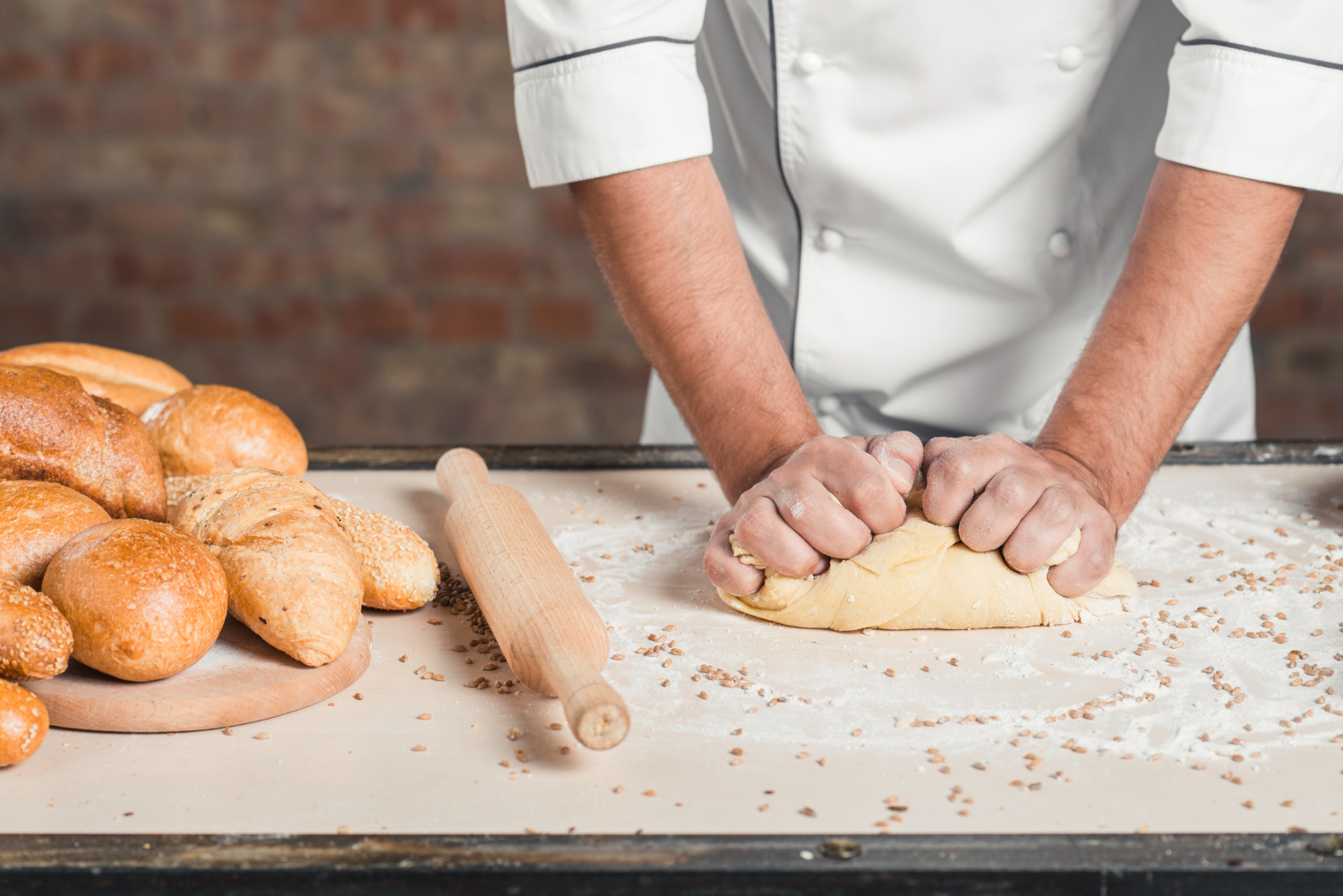 What Does Salt Do in Bread

Salt, the humblest of seasonings, is utilized in food preparation and preservation. But it was a valuable resource that had a significant impact on the evolution of ancient societies. Although salt has been considered quite precious at specific historical points, it is no longer seen as an asset on par with gold. Thus, salt was also called “white gold,” with sugar, cotton, marbles, ivory, and water all shared this moniker.

To increase the strength and tightness of dough, salt is a necessity for the baking business. However, it affects shelf life by reducing water activity, which decreases the longevity of baked foods. As a result, the salt should be fully dissolved in all doughs.

Salt also slows fermentation by affecting flavor and by applying osmotic pressure. If the fermentation rate is decreased, fewer carbohydrates will be converted into acids. This will result in the dough’s pH level rising and the crust’s color becoming darker.

What Is the Function of Salt in Bread?

There are several ways that salt is used in baked goods, especially in bread. The salinity of the dough and the bitterness of the alcohol are better matched with salt. This promotes the development of gluten molecules and slows yeast fermentation. Salt assists in the rise of the dough without ripping and thus helps create better-looking bread with a more significant rise.

A large amount of salt will hamper the fermentation of the yeast in bread dough. The cell membrane of yeast is semi-permeable; thus, water passes through it. The salt causes water to flow away from the yeast. This lower water supply delays the yeast’s capacity to ferment. When yeast is exposed to the highly salty dough, it can dehydrate completely, resulting in bread that does not rise. In addition, extra salt interferes with the natural metabolism, preventing its activity altogether.

Salt can act as a regulator of yeast, and it also helps control gluten development in dough. It does this by causing gluten proteins to take longer to hydrate. This change in the crumb structure’s consistency improves its structural integrity. This gluten extensibility is obtained by allowing air bubbles to be trapped in the gluten network.

Is Salt Necessary in Bread Making?

The primary constituents of basic bread are yeast, wheat, water, and salt. Whether you include active dry or instant yeast or use naturally occurring yeast, the essential bread ingredients remain the same. However, there are some instances when bakers at home have difficulty understanding why they should add salt to their bread, and it is no surprise why.

Baking your bread from scratch can lead to drastically different salt measurements in the recipe, such as from a teaspoon to a tablespoon. Remember that this amount is divided into minimal amounts, each serving in the grand scheme of things. Therefore, other questions involve the use of less or no salt in a bread recipe.

If you want to answer, you should know that your bread does need salt. Your bread will look and taste more amicable if you add some salt to it. Bread’s structure is improved by the addition of salt, which also helps preserve it. The first is flavor enhancement. Salt is an essential component in basic bread recipes; even if loaves with more milk, sugar, butter, eggs, and other features may not taste unpleasant without it. Wheat flour on its own is mediocre, but the addition of salt allows the flour’s subtleties to shine through, complemented by a rounder yeast flavor and overall balance in the finished loaf.

What Happens If You Forgot to Put Salt in Bread?

Very few bakers give salt much thought because it is such a tiny ingredient in bread. However, a light can be placed on a little bread-making topic, which can shed light on the entire bread-making process. Salt is an excellent example of this.

The effects of salt are ubiquitous in bread-making, and they permeate every part of the bread. So why is salt such a vital component of bread? What is the point of it if it isn’t used as a flavoring?

Salt helps increase the flavor of bread by evoking it. Tactlessly, most Americans think salt-less bread is insipid and inedible, despite bread that contains only about 2% of the flour weight in salt elicit full flavor. Although salt was just introduced to bread, its inclusion is nonetheless interesting.

Excess or inadequate salt levels can have a significant effect on how yeast works in your dough. For example, an excessively rapid rising dough is impossible without a proper salt level, and bland, flat, and light brown bread will result.

Salt can have a detrimental effect on yeast activity if it comes into close touch with it. Hence, always confirm the accuracy of your recipe and measure before you start.

What Happens If You Put Too Much Salt in Bread?

The peculiar flavor of extremely salty bread is something you’ve probably experienced. High levels of salt mixed in your dough can impede yeast activity and possibly stop it altogether. Accordingly, the baker faces a problem because salt’s ability to halt yeast activity is necessary for bread. Still, at the same time, it is also a crucial component of bread’s flavor.

Adding excessive salt to pastry dough creates hard and dense dough, which is not ideal for baking. Moreover, adding salt at different points in the kneading process affects the gluten levels. Still, it would help to find a balance between salt usage and ensuring the salt is incorporated correctly.

You should also be aware that salt might be detrimental to yeast activity. Even a small addition, such as a third of a teaspoon of salt per cup of flour, has a notable effect on yeast development. This is because it kills part of the yeast cells, lowering the quantity of replicating cells.

Some cooks prefer to include it into the flour initially, as they feel that the salt is already sufficiently dispersed. People who like it to be mixed with the liquid are in the minority. Some bakers would intentionally inhibit dough’s rise (such as by adding a little extra salt) to prolong their shifts.