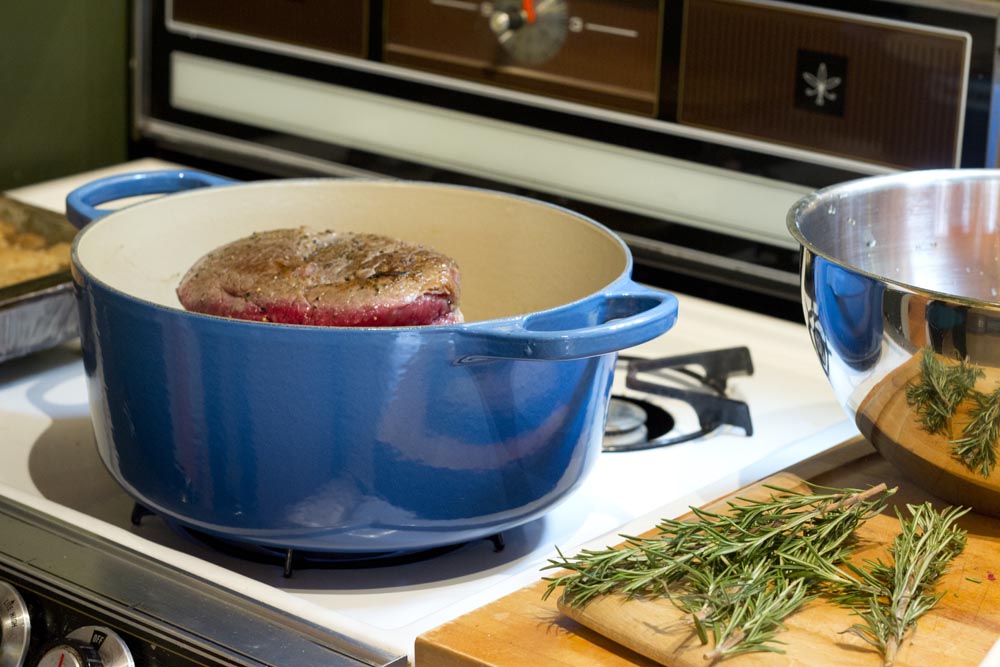 Dutch ovens are heavy-gauge cooking vessels that can be used on the stovetop or in the oven. The hefty metal or ceramic design ensures that the food cooked inside receives consistent, even, and cross-directional, radiant heat. Thus, Dutch ovens are all-purpose cookware with a wide range of applications.

As they are now known in the United States, Dutch ovens have been used for hundreds of years in a variety of civilizations and under several names. The feet on this essential cookware were initially designed to sit atop hot ashes in wood or coal-burning hearth. Dutch oven lids were once slightly concave, allowing hot coals to be placed on top, providing heat from above and below. Cocottes are the French term for these multi-purpose pans, whereas casseroles are British in origin.

Modern Dutch ovens can be used as a stockpot on the stovetop or as a baking dish in the oven. Heavy-gauge metal or ceramic ones can resist a variety of temperatures and cooking methods. Thus, in a Dutch oven, almost every cooking operation is possible.

There are two types of modern Dutch ovens: bare cast iron and enameled cast iron. Each has its own set of benefits, drawbacks, and optimum applications.

For many chefs, bare cast iron is the preferred cookware metal since it is an outstanding conductor of heat. Because the metal can resist extremely high temperatures without degrading, it can be used in many applications.

Dutch ovens that are enameled can have a rugged ceramic or metallic (aluminum or cast iron) core. Ceramic, like cast iron, transmits heat incredibly efficiently, which is why Dutch ovens are frequently made with it.

Enameled Dutch ovens do not require any unique cleaning methods, making them ideal for people looking for simplicity in the kitchen. Although enamel is incredibly durable, some enamels are not designed to resist extremely high temperatures, so check with the manufacturer first.

Is A Dutch Oven Necessary?

Yes, Dutch ovens are great for cooking overall because they can do so many things in the kitchen:

What Can I Use If I Don’t Have a Dutch Oven for Bread?

If you don’t have a Dutch oven at home, the most straightforward alternative is using a cast-iron skillet. For this workaround, you will need two cast iron skillets. Use an eight to twelve-inch skillet to hold the bread and a six to eight-inch skillet for ice cubes. Ice cubes will provide the steam that bread needs to rise properly.

Before closing the oven, pour all the ice cubes into the cast iron skillet and complete the range. Bake for twenty minutes. Please keep in mind that this procedure is only safe for cast iron skillets. If you use this technique on a ceramic baking dish or a glass baking dish, these materials can quickly explode.

Can I Use a Casserole Dish Instead of Dutch Oven for Bread?

Yes, the casserole dish is one of many alternative bakewares to effectively baking bread. While the Dutch oven is one of the most efficient bakeware around, humans have been making bread for more than a millennium (well before the Dutch oven was invented), so it makes sense that you can still make bread without one.

Please take out your beloved 13×9 casserole dish/casserole pan and put it to good use once more. Batch cakes, bread, sticky buns, and cinnamon buns can quickly be baked using casserole dishes.

Can I Use a Roasting Pan Instead of a Dutch Oven?

A roasting pan’s primary function is to roast foodstuff. Nothing, however, stops it from being used as a large baking dish for bread, side dishes, casseroles, and even larger cakes. If you don’t have a handy Dutch oven at home, you can make one out of aluminum foil.

Baking dishes can also be used for a variety of purposes too. This bakeware heats up faster and retains heat better than metal pans. Thus oven settings may need to be adjusted occasionally. Roasting can also be done in a baking dish.

The main picture is from Didriks.