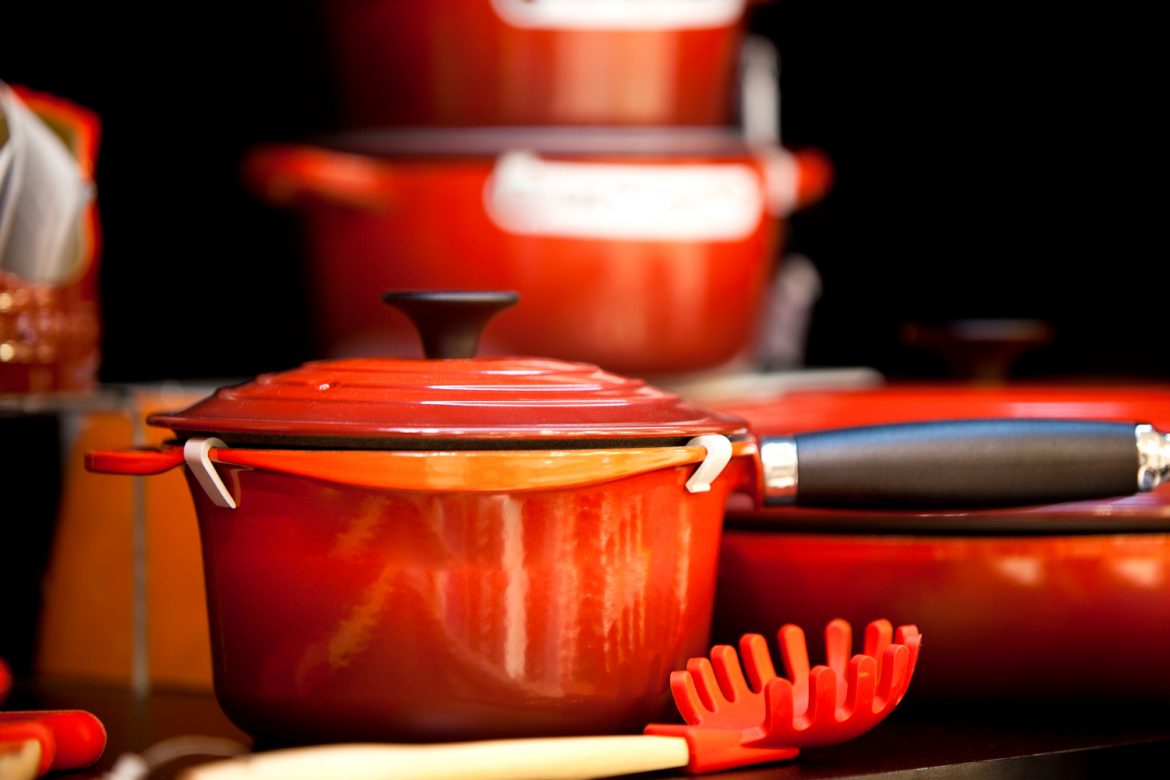 Dutch ovens, especially those from well-known brands like Staub and Breville, may be pretty costly. So while many individuals fantasize about having a complete set that rivals a Williams Sonoma exhibit, it’s simply not feasible unless you have an unlimited spending account. And that’s fine! Because you could get by with just one Dutch oven, as long as you shop wisely.

What Size Dutch Oven Should I Start With?

Dutch ovens range in size from really tiny (think of having just one-quart capacity) to monstrously large (think thirteen total quarts, with space, to boo). However, suppose you want to follow Goldilocks’ advice of having something just right and assuming that you are living on your lonesome. In that case, we recommend choosing a Dutch oven with a capacity of 5.5 to 6 quarts.

Here’s why. A middle-of-the-road Dutch oven will still give you access to all the beautiful stews, soups, and casseroles that you want, and those no-knead bread recipes you have seen around the internet if you have this capacity.

Something this enormous will help you feed a crowd, and you can still braise a chicken in it.

We also know that you might be tempted to go smaller. If you live in a tiny flat, you have probably already downsized many of your cookware, bakeware, and kitchen appliances. For example, you probably have a bar refrigerator instead of a two-door. However, trust us on this one when we say that you are better off with a slightly bigger Dutch oven.

If you buy anything smaller than a 5.5-quart Dutch oven, you will be left with a functioning Dutch oven but not enough carrying capacity for the majority of the Dutch oven recipes that you will see online.

Now, if you are debating whether to opt for an oval Dutch oven or a round one, here’s the quick answer. Pick the round one instead. You can still fit meats in a round Dutch oven, and your new Dutch oven will sit better on your gas hob. An even keel on the gas hob will undoubtedly result in better and more uniform cooking. In addition, when all of the burners are lit simultaneously, the round one is smaller, making room for the other cookware.

We can even go up a size and still be on the right track. For most home chefs, five to seven quarts are ideal. This size is perfect for cooking for a family of four. Even if four people are noshing away on the dish, there are still frequently leftovers. Why? Because anything cooked in a Dutch oven will be very flavorful. Dutch oven recipes are not something that you can bolt or scarf down in minutes. Because of the flavor and texture of casseroles, they take time to appreciate and digest.

So, what is the most popular size?

According to manufacturers Le Creuset and Staub, the most popular size, their bestseller, has always been the 5.5 quarts.

Now, let’s say that there are six or more members in your family. What Dutch oven might be more appropriate? If this is the case for you at home, forget about the 5.5 quart or six-quart Dutch oven. Instead, you will need a seven-quart Dutch oven.

Just remember – you have to be able to manage your Dutch oven.

The Size Table of Le Creuset Round Dutch Oven

What Size Is A 30 Le Creuset Dutch Oven?

We know that you will always be looking for something bigger and better. And if you need something with the capacity to provide fresh casserole for seven or more people, then you are looking up the alley of the 30 Le Creuset Dutch Oven. However, the “30” can be confusing. Does it mean 30 liters? Does it mean something else?

What Can You Cook in A 6 Quart Dutch Oven?

Plenty! A 6-quart Dutch oven is already ideal for various recipes, from vegetarian chili to classic casseroles. Remember that Dutch ovens are often used for braising and tenderizing large quantities of meat over a long period. The even distribution

n of heat is excellent for slow-cooking for hours without damaging the protein. So while a Dutch oven isn’t precisely a Crock-Pot, it’s pretty close.

What Size Is Considered a Large Dutch Oven?

There are no fixed rules as to what can be considered significant in the world of Dutch ovens. Professional restaurants will probably barely notice the size differences because they thrive on cooking capacity. If you have been reading with us from the beginning, you know that the “sweet spot” for personal Dutch ovens is between 5.5 and 6 quarts. Six quarts, in particular, provides you with suitable space for nearly all Dutch oven recipes, and it will also allow you to cook for company. That’s probably the most crucial facet of Dutch ovens. They’re meant to be great companions when you need to cook for guests or family coming over.

So from this vantage point, anything over six quarts would automatically be a “large Dutch oven.” A seven-quart Dutch oven will be enough to feed five to six people. Le Creuset has a giant that can hold 13.5 quarts. That’s double the size of an average personal Dutch oven. While we’d love for people to have big Dutch ovens, they are naturally heavy, so be careful when buying the larger ones.

Can You Use Gorilla Glue on Cookware?