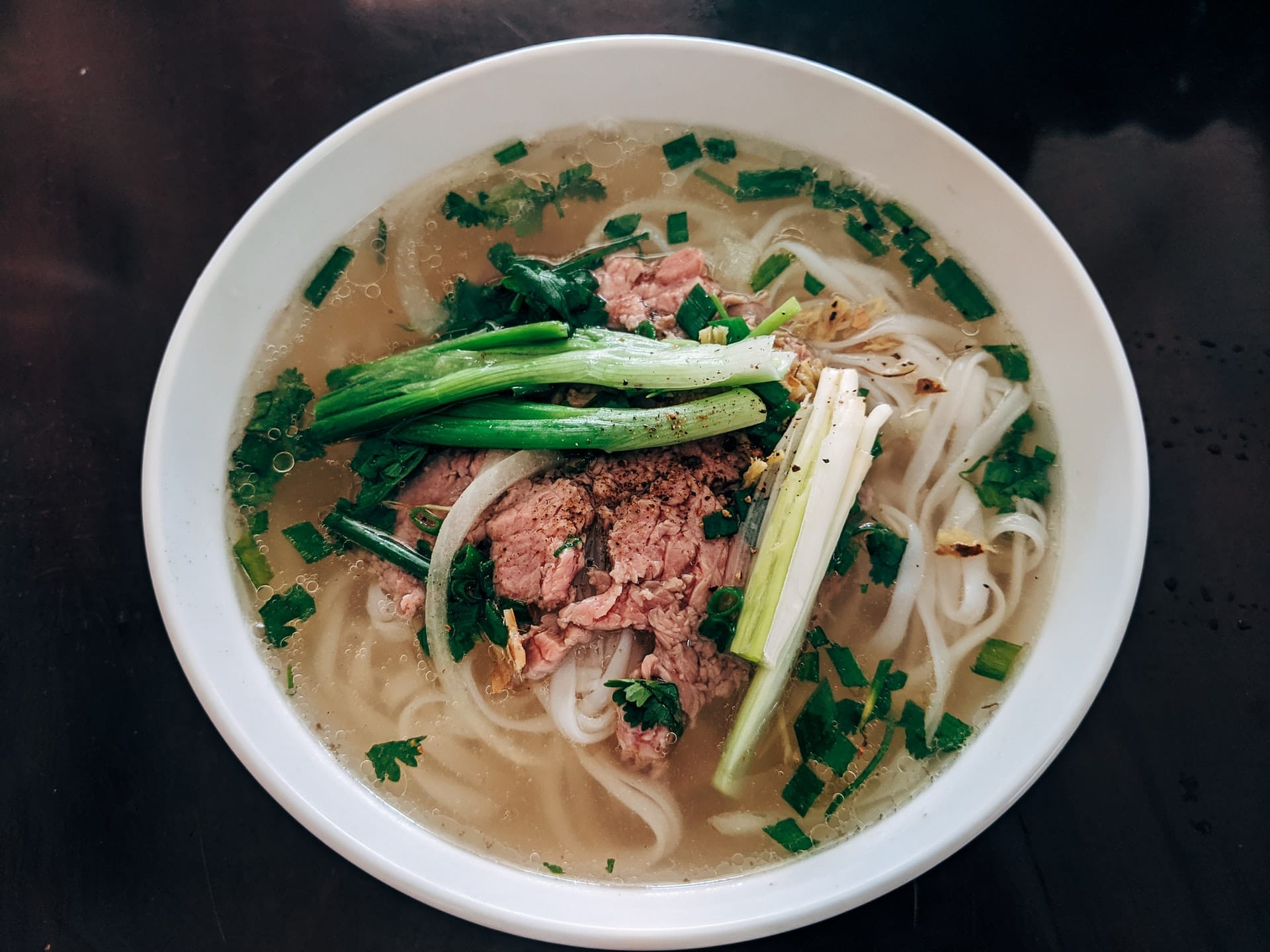 Pho is a traditional Vietnamese soup comprised of these significant ingredients: rice, broth, herbs, noodles, and meat. Sometimes, additional strips or portions of chicken are added for extra flavor. In Vietnam, pho is prepared at home, or you can buy it from street vendors, hole-in-the-wall restaurants, and other establishments. Vietnam rightly considered pho as the national dish, and the Vietnamese take a lot of pride in the fact that pho is so healthy and nutritious, and it supplies sufficient energy per meal to support the locals in their daily life.

Globally, pho was popularized by Vietnamese refugees and migrants who brought the dish to other parts of the world. There are different kinds of pho within Vietnam, and the local variations will differ on the thickness of the noodles and other components of the recipes, as is the case with all kinds of food. Some pho recipes will also seem so different from one another because of the herbs used.

How Many Calories Is a Bowl of Pho?

Do pho calories bother you? How many calories in pho? Since pho is prepared differently, there will be some variation with the number of calories per bowl. You can expect up to 450 calories for each average bowl of pho. Four bowls of pho will bring you almost 2000 calories, which is the average caloric requirement for adult males and females.

Is Pho Good for Your Gut?

Generally speaking, pho may be suitable for your gut because it has a lot of vegetables and fiber, in addition to animal proteins. It is street food, so expect the food to bring a lot of energy.

All kinds of street food are designed to bring a fair amount of calories because they are food for lower-income individuals who need access to calories at a lower cost.

In a nutshell, yes, pho is healthier than most food that you will find in fast-food joints and restaurants. Each serving will bring you just 450 calories at most, assuming you get around 20 fl. oz. of bone broth. There will be around 50 grams of carbohydrates, plus 30 grams of animal protein. The only downside is that pho is naturally salted a lot, so expect around 1500 mg of salt for each bowl.

On the upside, pho requires mostly lean cuts of meat, so the fat content for each bowl is not problematic. Round steak and flank steak are usually used for making pho. Other recipes call for seafood portions and chicken. You will tell what kind of nutrition you are getting by merely observing the ingredients used for your bowl of pho.

Is Pho Better Than Ramen?

Pho nutrition facts notwithstanding, pho appears to be slightly better than ramen. The main reason for this is that pho is lower in fat and has a higher density when tracing nutrients and dietary fiber. So if you are looking at the situation from a health perspective, we’d recommend pho more than ramen.

However, if your goal is to eat something savory and provide a massive punch of comfort food goodness, the title goes to ramen. Ramen is fattier and therefore, flavor-wise, it is going to pack a lot more flavor than pho. However, if you want more vegetables and texture, then pho is there for the taking.

Is Pho Good for Losing Weight?

Pho nutrition shows that pho might help control your appetite for more calorie-laden food. By tweaking the ingredients and managing your portions, you may be able to eat pho without gaining a lot of weight. If you eat several servings of pho at a time, you will pack the calories. That is not the food’s fault, however. The more you consume a particular food item or beverage, the more calories you will get. It’s how things work with calories and nutrition.

Also, the meat content of the pho will influence the overall number of calories. We recommend not adding too much meat.

The Best Way to Use an Essential Oil Diffuser