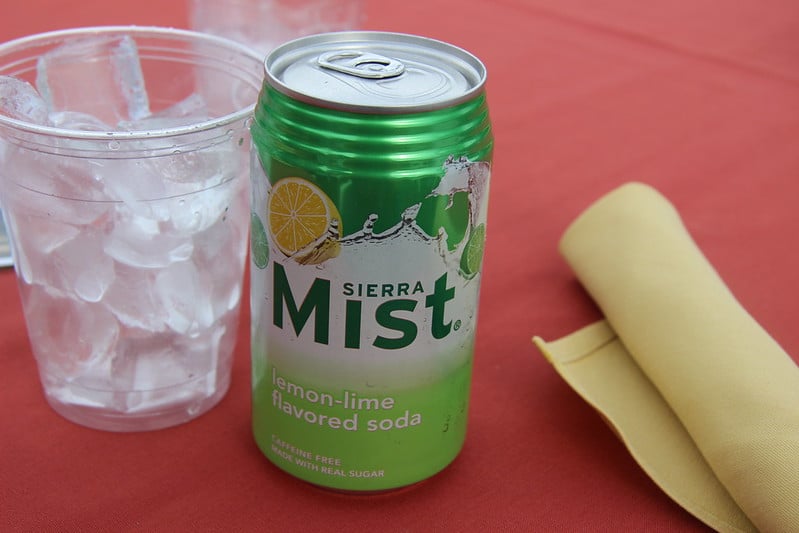 Sierra Mist Soda is a product of the PepsiCo Company and stands in stark opposition with Coca-Cola products like Sprite. It is a light soda that provides a lemon-lime kick that many soda drinkers love. Lemon-lime flavored drinks occupy almost half of the entire market for regular sodas, making Sierra Mist one of the most popular mixers by category.

Sierra Mist Soda is a caffeine-free soda. This means it has the same formulations of other drinks, minus the caffeine additive. This makes Sierra Mist a good alternative for sodas that are full of caffeine and may not be appropriate for consumers who develop severe reactions to caffeine. Some people experience arrhythmia and racing heartbeats as a result of consuming caffeine.

If you have such a condition, you may want to stop drinking soda with caffeine and shift over to sodas like Sierra Mist and ginger ale, to conserve your health. If you are a heavy caffeine drinker before and are currently suffering from some after-effects, you don’t have to remove soda from the equation altogether. However, you may want to rethink what brands to consume right now because many drinks have quite.

PepsiCo lists down the following as the ingredients of Sierra Mist: calcium disodium EDTA, ascorbic acid, aspartame, potassium benzoate, citric acid, natural flavor, and carbonated water. As you can see, despite the clarity of this soda, it contains the majority of the common ingredients used for other kinds of drinks and related beverages. However, the vast difference is that it does not contain caffeine in any form, making it safe for people who can’t tolerate caffeine in their systems.

This doesn’t change the fact that Sierra Mist is still a soda, and therefore, the health effects of drink remain under its belt.

Which Soda Has the Most Caffeine in It?

According to the CSPI, the following brands of soda have the highest amounts of caffeine per serving:

Mountain Dew – 54 mg (regardless if it’s diet or regular)

Dr. Pepper – 41 mg (regardless if diet or regular)

The Health Effects of Caffeine

Are you worried about how caffeine affects your body? Here is a rundown of the most common effects of caffeine when consumed. Keep in mind that these symptoms or after-effects do not happen to everyone. It remains a case to case basis, still. However, if you have been experiencing something different from late while consuming anything with caffeine, you may want to look at the possible side effects.

Caffeine naturally increases the alertness of a person. It is a powerful neurological stimulant, but its effect is usually short-lived (a few hours at most). What it does it blocks a chemical inside the brain that signals tiredness. When this chemical is blocked, the brain continues to be alert, and depending on the impact of the caffeine on the person; it can continue working for more extended periods. The problem with this impact is that at higher doses, caffeine can also trigger the anxiety response. Additionally, some people even feel nervousness, which is beyond simple alertness.

This type of symptom occurs when a person consumes 1000 mg of caffeine or more per day. This is roughly ten times the usual amount of caffeine that a single cup of coffee can provide. People who drink caffeinated sodas and coffee regularly are at risk of developing nervousness. Additional symptoms associated with this state are rapid breathing, more stress than one can handle, and some cardiovascular anomalies.

Again, anxiety may not manifest in everyone who takes higher doses of caffeine. The higher the answer, the more pronounced the symptoms.

Insomnia is the inability to sleep when a person wishes to fall rest. It is a neurological disorder, and the most pronounced insomniacs barely get enough sleep for good health. Caffeine-induced insomnia is more pronounced in the elderly. It appears that the more you age, the more caffeine pushes you to wakefulness. Younger soda and coffee drinkers are less likely to suffer from insomnia, so they’re safe from this side effect somewhat.

Caffeine has a two-pronged effect on the digestive tract. It encourages the release of gastrin, which helps in moving waste. This is why many people like to drink coffee in the morning because it helps in more natural bowel movement. This is prized when you think about it, especially when you are already aging. On the downside, a link has been established between excessive caffeine intake and GERD or gastroesophageal reflux disease. If you have GERD and are already struggling to control it, you must avoid drinking caffeinated drinks in the meantime, as these drinks may worsen your symptoms.

A condition called rhabdomyolysis has been linked with a sudden intake of a high dose of caffeine in the body. A classic case was recorded wherein a woman suffering from muscle tissue breakdown and nearly died. She was treated on time and survived the ordeal. When muscle tissue broke down, the particles of dissolved muscle tissue can enter the bloodstream, causing complications.

This is one of the significant side effects of regularly drinking caffeinated products. You eventually develop a dependence on the said products, and you can’t function well without them. This can also lead to serious medical problems as the dose needed to get the same effect increases over time. Some people even drink more soda and coffee to deal with stress, as the stimulant counters stress momentarily.

Can Oyster Mushrooms Be Frozen