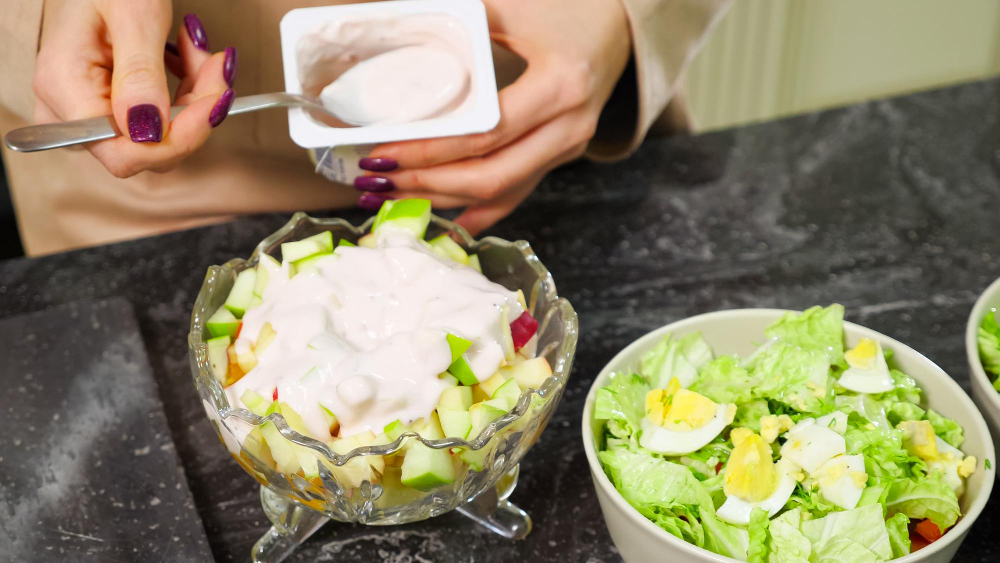 Halal yogurt comes in a range of flavors and textures because its halal certification does not dictate the sort of yogurt it is but simply the ingredients used to make it. This means that halal yogurt includes everything from plain yogurt to rich fruit yogurt to typical Greek yogurt.

Purchasing vegetarian-friendly yogurt is one safe approach for a Muslim to ensure that most haram goods have been excluded. This ensures zero traces of blood, carrion, or meat in these products.

A variety of factors influence whether yogurt is halal or haram. In general, this means that goods must not contain pig byproducts such meat, oil, fat, and gelatin, as well as traces of alcohol, blood, carrion, or meat butchered in a non-Islamic manner.

Greek yogurt is denser and thicker than regular yogurt. Whereas conventional halal yogurt is virtually pourable, Greek yogurt is almost solid—you can practically stick a spoon upright in it.

Greek yogurt is made by placing conventional yogurt in a fine mesh cloth and allowing the whey to gently drain out, resulting in a thicker yogurt with less moisture. This technique alters the texture of the yogurt while retaining the delightful sourness that we associate with all yogurts.

The most noticeable distinction between Greek yogurt and halal yogurt is consistency. You can use it in place of conventional yogurt in recipes, but you’ll need to whisk some water or other liquids into it to acquire the appropriate texture; neglecting to do so may throw off the moisture of the entire dish, resulting in dry results.

What Does Halal Yogurt Mean?

For those new to shopping for halal items, determining if yogurt is halal or not can be difficult. Even with all the ingredients stated, it is not always better to ascertain possible cross-contamination from the machinery used to make the yogurt.

Halal foods are lawful and can be consumed by Muslims who follow Islamic rules. However, Muslims are not permitted to ingest haram or forbidden foods or beverages.

The key to making the yogurt halal is to create a new type of whey and, especially, to use the rennet enzyme. Rennet is an enzyme that helps digest mother’s milk and is isolated from the mucosa of the calf’s fourth stomach.

Foods with the halal mark on their container have been recognized by an agency and are guaranteed free of any prohibited components or ingredients. The identity of the certifying body must appear on the nutritional labels or packaging if halal claims are made.

A halal yogurt must utilize halal gelatin in addition to halal whey if it uses gelatin at all. This entails utilizing gelatin that is not derived from pig bones.

Aside from those considerations, most non-alcoholic yogurts can be halal. Most yogurts contain sweet ingredients like caramel, chocolate, honey, and fruits like strawberries and bananas.

Is Greek Yogurt Made with Gelatin?

Gelatin, which is made by extracted oils from animal skin, ligaments, tendons, or bones, is found in some Greek yogurts. This means that these versions are regarded as non-halal and cannot be consumed by Muslims.

Because yogurt is frequently made from milk or dairy alternatives, some people consider it a vegetarian meal. Furthermore, several companies use animal gelatin to improve gelatin’s consistency and shelf life.

A few producers add gelatin to their yogurt to make it creamy and prevent it from separating. However, partially decomposing collagen proteins can synthesize gelatin in animal tissues such as skin and bone.

Gelatin is obtained from collagen, a protein found in meats, bones, and animal skins. This is something that vegetarians and vegans should be aware of. Gelatin dissolves and congeals when heated, allowing foods to set.

The gelatin in the yogurt is derived from animals, but it contains no actual meat. So, as far as we know, gelatin is the only non-vegetarian ingredient in yogurt.

However, if you follow a halal diet, you should avoid yogurts that contain gelatin. Instead, choose non-gelatinous yogurts like several Greek yogurts.

Chobani is primarily considered the leading Greek yogurt producer in the United States. Although all Chobani products are clear of gelatin and other animal-based thickeners, not all of them are halal.

This food company specializes in manufacturing strained yogurt with a more extensive protein content than regular yogurt and popularizes it in the United States. Its products include strained yogurt cups, drinks, flips, and children’s snacks, the most famous Greek yogurt.

According to the official website of Chobani, some of the goods are not labeled as halal, so it is best to contact the company’s customer care before purchasing. This is because some of the fruit’s essence is derived from natural alcohol, not halal.

Which Yogurt Does Not Have Gelatin?

Yogurt and other creamy foods, such as desserts and marshmallows, include gelatin, frequently derived from animal tissues and proteins. Some manufacturers replace gelatin with pectin, making it edible for people with a halal diet.

Eating a cruelty-free diet may be more complicated than you think. For example, you may have difficulties locating yogurt items containing animal fat and protein—luckily, there’s pectin.

At their most basic, pectin and gelatin can be used to create a gel-like substance, albeit their applications and foundations differ substantially. While gelatin is an animal protein, pectin is a water-soluble fiber derived from plants.

Gelatin, rennet, shortening, and various other fillers and binders are derived from animal products and derivatives such as milk, meat, and fish. As a result, vegans and vegetarians who wish to avoid animal products should reconsider the contents of these goods.

If you are a Muslim practicing halal, you should avoid Noosa’s creamy yogurts because they include gelatin obtained from bovines. Furthermore, no genuine beef products are contained in the yogurt, even though some of the product’s ingredients are derived from cattle.