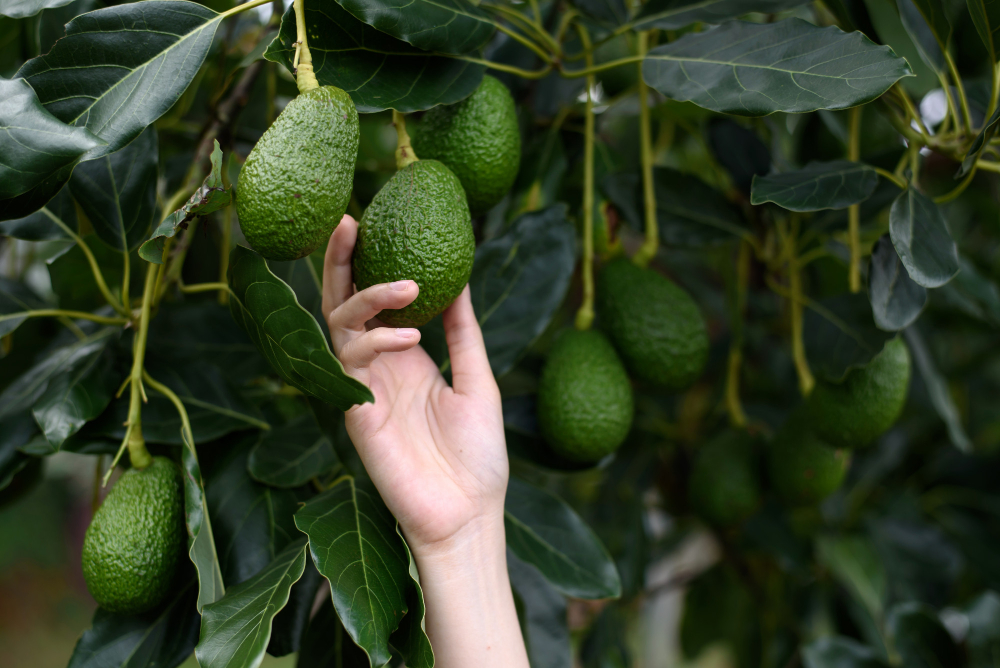 Since Lamb Hass is regarded as a hybrid of the Hass avocado lineage, most Lamb Hass can be traced back to Guatemala. However, they have also become a prevalent backyard variety because they have an exceptional flavor, are easy to peel, and have an extended season.

In short, we can say that Lamb Hass is a variant of the Hass primary family. However, this doesn’t mean they are almost identical in taste, price, and growing conditions. Aside from the Lamb Hass, you may compare the mother variant with Oro Negro avocado vs. Hass avocado.

Flowers on avocados are one-of-a-kind. However, because avocado blossoms don’t have distinct male and female blooms as some plants do, they can switch gender!

A partner tree isn’t necessary for cross-pollination on the vast majority of avocado cultivars, which are known as self-fruiting. Without a companion, they should be able to produce avocados.

The female reproductive portions of Type A avocados are available earliest, and they bloom in the morning. The male phase of Type B avocado blooms opens in the morning. The flowers open the following afternoon as the opposite sex as if each of them had pulled a switcheroo.

What Is the Difference Between Hass and Lamb Hass Avocado?

Aside from Hass, the most popular variety of avocado found in supermarkets, there are dozens of others. Hass isn’t necessarily the best, but since shipping and storing are easy, it is the most marketable product.

The Lamb Hass, patented by the University of California in 1996 and had previously been known by its previous name, BL122, was named for the Lamb family and its Hass history. Lamb Hass avocados weigh anywhere from 10 to 18 ounces, making them significantly more significant than the standard Hass variety.

As a result of the fact that its parent variety is the Gwen avocado, an offspring from a Hass seedling named thille that is not very well known; the Lamb Hass is regarded as a “hybrid child” of the Hass and Gwen varieties.

This variety is preferred to the standard Hass avocado because of its excellent late-maturing fruit, smaller tree, and greater yield. They reach maturity later in the season than their Hass relative, who grows on productive, erected, compact trees.

Is Lamb Hass Avocado Type A Or B?

Type A of the avocado family includes the Lamb Hass, a mix between a Hass and a Gwen. Compared to Hass, these fruits mature much later and are significantly larger.

Due to the avocado’s excellent velvety taste and ease of peeling, it is quickly becoming a popular commercial and garden cultivar. The growth pattern of an avocado tree of the Lamb Hass kind is upright and dense.

Compared to most other avocados, Lamb Hass avocados are more significant and rounder in shape. In addition, a dark, nearly black skin develops on it as it ripens and grows darker.

Numerous Type A avocados can be traced back to Hass or a lineage from that place. To put it another way, they’re known for their thick, hard skin and delicious, oil-rich flesh. In addition, they’re recognized for their creamy texture.

As if that wasn’t enough, avocados are a common denominator between the two. Avocado trees that bear fruit in two to four years or less are easiest to come by as grafted nursery trees, which are available for as little as $10 to $20.

What Type of Avocado Is Lamb Hass?

The origin of a large number of Type A avocados, including the notorious Lamb Hass variety, may be traced back to Hass or to a lineage that originates from that location. According to the botanical classification system, the avocado is a type of berry, although it is a member of the laurel family.

This Hass variant can be described as pear- or oval-shaped and can be recognized from Hass avocados by their shoulders that are squared off rather than rounded. Even when it is not quite ripe, the pebbly skin is a very dark green, and as it ripens, it will continue to darken until it is almost entirely black.

Which Variety of Avocado Is Best Tasting?

The Hass avocado, one of the most popular varieties of avocado, is also often considered the best. Guacamole is a great dish to serve with this avocado because of its creamy texture and robust flavor.

The Hass avocado tree is a common and commonly utilized avocado species. Fruit from these trees is not only fantastic but also good for you. They make a lovely addition to any yard.

As the avocado ripens, the green color of the avocado’s skin fades to black and takes on a rough, pebbly appearance. From medium to large, this avocado variety’s fruits come in all shapes and sizes. However, the flavor of the Hass has been described as nutty yet mild, while the meat’s texture is creamy and rich in fat.

Concerning ripeness, the buttery flavor of Hass avocados can be best described as slightly nutty. However, its mild taste is a versatile ingredient that may be included in many cuisines.

You can use berries in everything from a smoothie to a bread mash, and there are countless other ways to use them. Aside from savory foods, avocado can be substituted for butter or oil in various desserts. As a result, avocados are a highly adaptable food item.