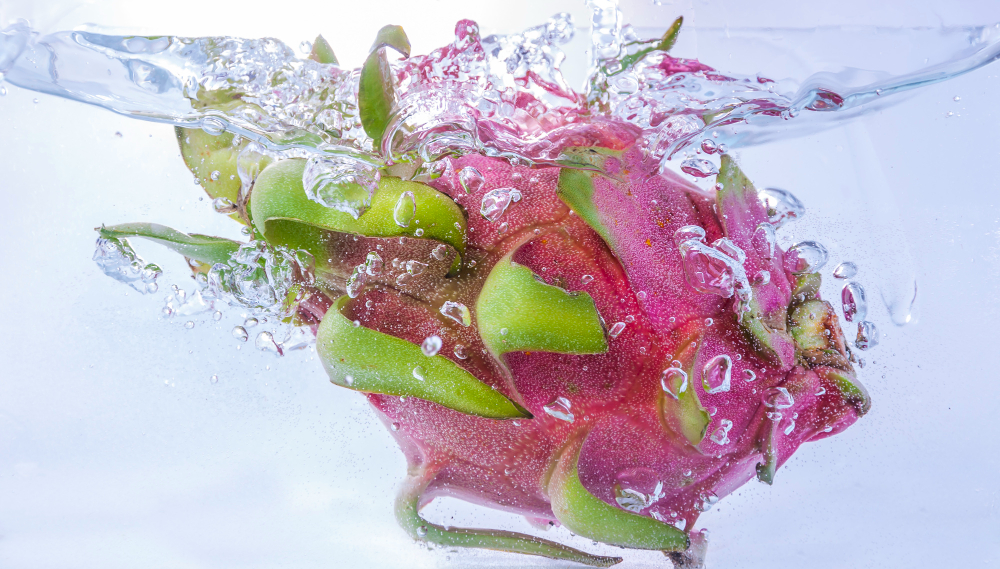 Why Do You Wash Dragon Fruit With Salt

You should wash your fruits, such as dragon fruit, with standard water and rewash them after soaking them in salt water that has salt in it. The majority of the residual pesticide residues that ordinarily accumulate on the skins of vegetables and fruits will be eliminated by employing this method.

At some point throughout the cultivation process, mostly all fruits and other crops are subjected to pesticide spraying. Pesticide residue found in high concentrations in foods like fruits and vegetables can be toxic and has been linked to an increased risk of developing cancer over time, as well as other health problems like congenital disabilities, disruption of the immune system, and harm to the nervous but also reproductive systems in the body.

This demonstrates the critical importance of exercising extreme caution concerning the presence of pesticides in fruits. The residue left behind by pesticides must be removed from fruits and vegetables before they can be consumed safely, mitigating the associated risk and avoiding the aforementioned health problems.

It would help if you were extra careful with certain fruits because they could contain more residue than other fruits due to their size and form. To eliminate undesirable dirt and chemicals, dragon fruits must be washed in salt water and thoroughly cleaned.

Do You Have To Wash Dragon Fruit With Salt?

If you’re like us here at Iupilon, you find that a diet rich in colorful fruits and vegetables is both satisfying and healthy. Therefore, it is essential that we first establish why it is crucial to wash fruits before moving on to our top advice.

The list of benefits is virtually unlimited, but one of the most obvious is that you eliminate the possibility of swallowing any stray chemicals. A thorough cleaning can also remove any germs that may have accumulated on the fresh produce as it traveled from the ground to the store.

To remove pesticides and other contaminants, fruits and vegetables can be washed in salt water. For optimal results, immerse your fruit and vegetables in a solution of Himalayan salt or sea salt for 20 minutes before rinsing them under running water. After that, they are safe and ready to be consumed.

Produce, including dragon fruits, should be washed for at least 20 seconds in water to remove any pesticides or other residue that could cause food poisoning. There is no need for soap or other cleaning agents when washing vegetables. Put them in a strainer instead of the sink since bacteria love to hang around there.

How Do You Clean And Serve Dragon Fruit?

It’s difficult to put the taste of an unfamiliar fruit into words, so we often compare it to those we already know and love. The most typical parallel is to kiwi, while the flavor of pear is also occasionally mentioned.

Dragon fruit, once cut, will dry out and become brown, so wait until right before you use it. Dragon fruit can be eaten directly from the shell after being sliced in half and scooped out, or the flesh can be carefully chopped and removed from the skin using a pointed spoon.

Make fruit salads that are as stunning as they are delicious by including dragon fruit. As a puree, dragon fruit can be used in various dishes, including sauces, puddings, desserts, and drinks.

Is The Skin Of Dragon Fruit Poisonous?

There are three primary types of dragon fruit. The pink-skinned, white-fleshed dragon fruit is by far the most common. However, dragon fruits with a red interior and skin can also be found.

There are a lot of uses for dragon fruit skin that you might not have thought of. First, it’s not the most delicious thing in the world to cook, but it has many health benefits, so it’s okay to use it occasionally.

Grilled or seared seafood, such as tuna or cod, goes excellent with dragon fruit. Try dragon fruit chutney with your seafood, or incorporate it into your favorite mango and pineapple salsa recipe for a unique and delicious twist.

Can you use dragon fruit skin for anything? Dragon fruit peel, when uncooked, does have a leathery feel to it. It’s believed to have a slimy, slippery consistency when cooked. The skin of dragon fruit is not particularly tasty. However, the addition of sugar and spices elevates its savory flavor.

Does Dragonfruit Need To Be Washed?

Produce washing is one of the best ways to protect yourself and your family from norovirus, the most common cause of foodborne illness in the United States. Stomach discomfort, diarrhea, nausea, and vomiting are all possible symptoms.

The effectiveness of rinsing fruits, such as dragon fruits, is supported by the opinions of specialists. In addition, physical pollutants like pebbles, dust, bugs, and other residues can be removed with thorough washing.

Scrubbing away the grime may keep you from being ill. However, a little piece of dirt harboring a viable strain of bacteria could cause food poisoning.

You can get rid of some harmful bacteria on your fruit by washing it, but not all of it. As a result, you can become sick from food even if you clean it thoroughly.

The bacteria on the surfaces of fruits can be washed away with a cold water wash. However, one of the issues is that water doesn’t get rid of them entirely.

Biofilms, communities of closely-knit microorganisms, are notoriously difficult to eradicate. For this reason, adding salt to your fruit wash is highly recommended.

Can You Dry Dragon Fruit

Can You Use Dragon Fruit Skin For Anything

Can You Grind Coffee Beans in a Food Processor?