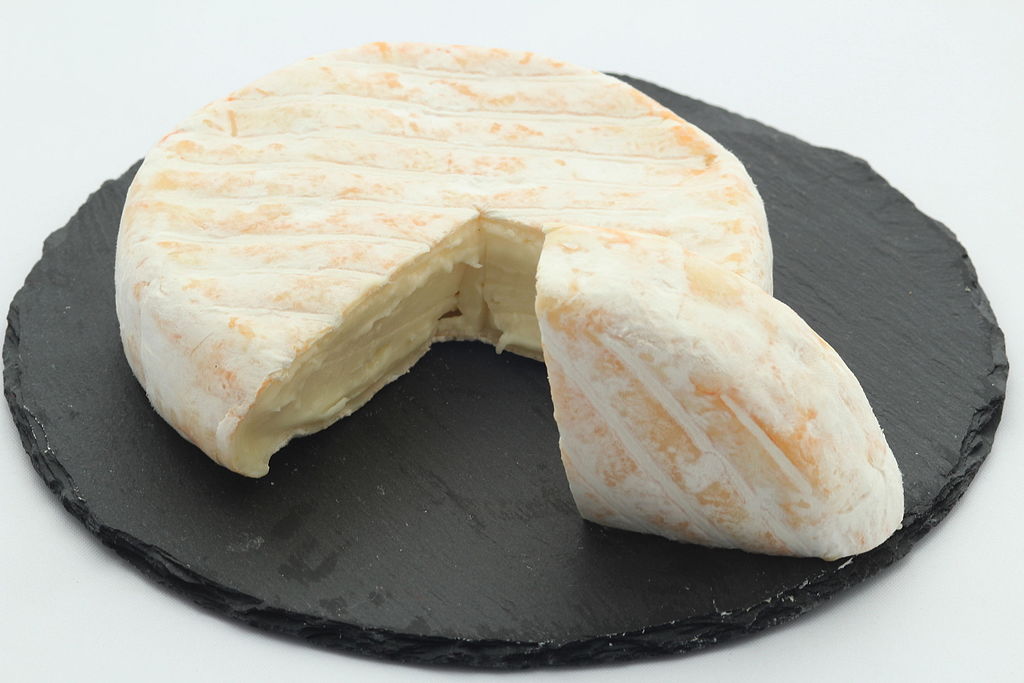 Reblochon is a semi-soft mountain cheese with a washed-rind and smear-ripened rind that developed in the center of the massif des Aravis in the Haute-Savoie region of France. In 1958, the cheese was designated as an AOC cheese, which means it must adhere to strict guidelines. This is because dairy products are so delicious and versatile. We find cheese in almost every recipe we make. Take the case of cheese, for example. People enjoy eating cheese on its own and complementing it with other dishes.

It’s an uncooked, softly pressed cheese created from full-cream, unpasteurized milk. According to stories from the thirteenth century, Savoie herdsmen performed a partial milking of the cows to diminish their ‘taxable’ milk yield. Then, they returned to ‘remilk’ (reblocher) the cows after paying the rent to the landowners. The second milking of cows produced fattier milk used to manufacture Reblochon.

Reblochon has a delicate, silky peel that ranges from yellow to orange in color. The ivory-colored pate has a close texture and is exceptionally smooth and supple. Farmhouse cheese discs are aged for at least two weeks, during which time they develop a light beige crust and a buttery dough that is edible. Reblochon has a faint cellar aroma and a gentle fruity flavor with a nutty solid finish. It pairs beautifully with a glass of Savoie wine because of its delicate and subtle flavors. On the cheeseboard, the cheese is fantastic. Reblochon is also a key ingredient in Tartiflette, one of the most popular cuisines in the Alps.

Appellation d’Origine Contrôlée (AOC) stands for “controlled designation of origin,” It is a classification system used in France to classify items like wine and cheese. This safeguards a product’s conventional manufacturing method, ingredients, and historical origin. Similar to how Champagne must be made within the Champagne region to be labeled as Champagne, some types of French cheese must be manufactured within the Champagne region.

The AOC designation, which emphasizes the specific geographic and climatic circumstances that are unique to the locations where certain products originate, is influenced by the concept of ‘terroir.’ Certain AOC cheeses, for example, must use cow’s milk from a given location or be aged in a specific area for a particular period.

What Is English Cheese Similar to Reblochon?

The essential qualities of Reblochon’s cheese are its nutty flavor and creamy texture. Fontina is a washed-rind cow’s cheese similar to both, although Fontina comes from Italy, not France.

The flavor profile of Fontina is similar to that of the French delicacy. However, it is significantly milder. Fontina, like Reblochon cheese, has a robust and powerful scent that some people find unpleasant and off-putting.

Despite its toughness, Fontina melts quickly, making it an extremely versatile cheese. Fondue and all varieties of sauces love the somewhat gritty gooey texture.

Gruyère is a firm yellow Swiss cheese that can be used in place of Reblochon. Gruyères is the name of the city where it was born. Gruyère is full-bodied, sweet, and mildly salty.

When fresh, Gruyère’s flavor profile is nutty and creamy, but it becomes more powerful, earthier, richer, and complex as it ages.

With more flavor, everything you can accomplish with cheddar can be done with Gruyère, just with more taste. On the other hand, the rich nuttiness makes it a good substitute for the creamy French Reblochon.

So if you’re serving someone who doesn’t enjoy the smell or flavor of smelly cheeses, go for Gruyère.

What Is Similar to Reblochon?

After an extra-long curing period, Port Salut cheese is super-soft and creamy, thanks to skimmed milk. Another cheese is called after its place of origin, Port Salut in France’s Pays de la Loire. The aromas and textures of Reblochon and Port Salut cheeses are very similar. Most people would never be able to distinguish the difference based on flavor alone.

Port Salut is a semi-soft cheese, unlike the previous Reblochon options. It’s a tad milder and smoother, with a velvety texture to reward you. It’s less expensive than Reblochon and Gruyere, but it doesn’t melt as well.

Muenster cheese is a gentler alternative to Reblochon cheese. It is a semi-soft, washed-rind white cheese with a yellow rind. It has a bold but subdued creaminess reminiscent of Monterey Jack and is even softer than Port Salut.

You won’t discover a more excellent melting cheese than Muenster if you seek a reblochon cheese alternative. However, if you’re making something that relies on a strong cheese flavor, we recommend combining it with a somewhat more pungent cheese.

Reblochon has a delicate, mild flavor that, as it ripens, begins to develop a subtle bitterness. The scent is rich, creamy, and intensely nutty, with a noticeable odor, but the soft center is free of “stinky” cheese flavor. Unpasteurized milk from cattle breeds native to France is used to make Reblochon cheese. In large copper pots, the milk of these select animals is heated. When the milk is warm, cheesemakers add rennet to curdle it. Cutting and raking continue until the texture resembles grain.

Is Reblochon Similar to Camembert?

The rinds of Camembert and Reblochon are edible and delicious. However, some culinary critics suggest eating the cheese with the peel since it enhances the “Subtle and Earthy” flavors. The two mild kinds of cheese have a similar earthy aroma but taste considerably different.

Camembert is a pale yellow cheese with a buttery, creamy flavor. It has a texture similar to condensed milk, making it simple to enjoy for beginners. Reblochon, on the other hand, has a mushroomy, herbal flavor. The ivory cheese has a dense and compact structure. As a result, the taste would linger in the mouth for a long time.

Camembert’s smoothness makes it suitable for pairing with a simple warm baguette. Camembert is also known for being eaten hot. Cheese can give a dish a nutty flavor and a milky mouthfeel, even if it’s as easy as Mac and Cheese or as rare as barbeque. Reblochon should be served with room temperature bread if you desire the original raw mushroom flavor. However, if you want to introduce the beautiful chemistry of smear-ripened cheese to a recipe, consider cooking with it! Reblochon is a standard component in Tartiflette, a baked potato dish popular in the Alps!

The picture is from Guy Waterval, CC BY-SA 4.0, via Wikimedia Commons.

Which Orange Is the Sweetest?

Why Is Avocado Hard