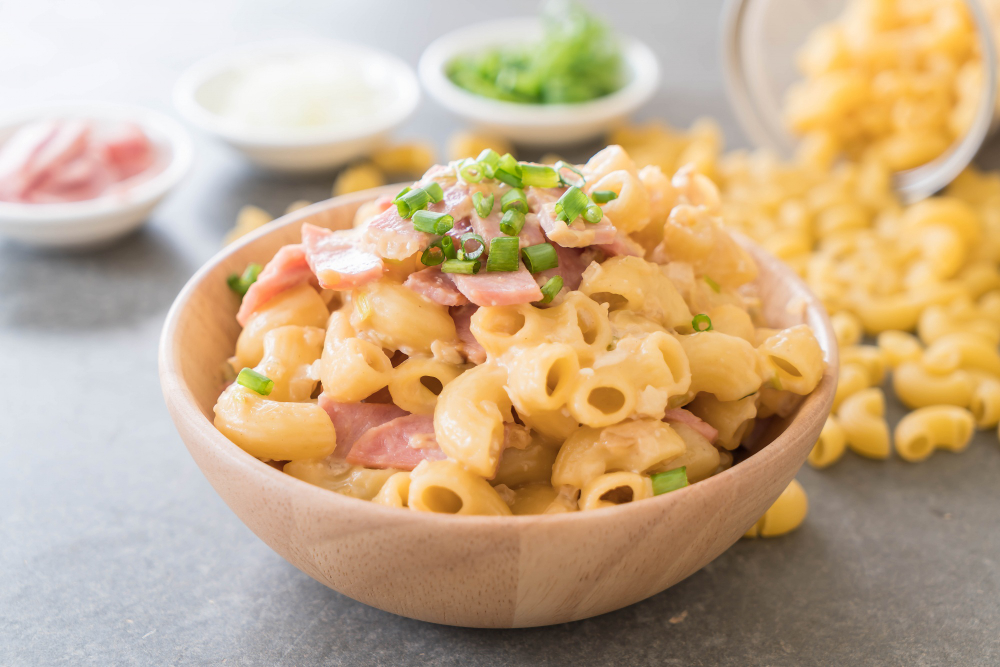 Historians aren’t sure who to thank for this sumptuous delicacy, but the first record in a cookbook can be found in Elizabeth Raffald’s “The Experienced English Housekeeper” in 1769. 1 Thomas Jefferson, who admired the fashionable cheese and pasta dishes served to him in France, eventually brought the dish to the United States. Americans embraced it (because everyone loves cheese).

During the Great Depression, the ever-famous blue Kraft Foods macaroni and cheese box was introduced, where it was offered for only 19 cents and could feed a family of four! Hundreds of mac and cheese meals and recipes have been invented since then, and families worldwide have enjoyed them. Unfortunately, this has also raised questions about safety in some circles. People inquire – can you get food poisoning from mac and cheese?

Can You Use Water Instead of Milk in Kraft Mac and Cheese?

We’re not sure about water, but there are ways to make that mac and cheese respectable if you don’t have milk at home.

You take out your packaged macaroni and cheese, get a pan ready, and then BAM. You’ve used up all of your milk. But, CERTAINLY, there’s a quick and easy cure that tastes good and doesn’t require a trip to the store?

Shredded cheese or cream cheese was the most impressive alternative overall. My go-to vegan or non-dairy options would be pasta water, stock, or alternative milk (oat or soya).

Kraft Mac and Cheese have a cream flavor, so it must have a similar taste to whatever you use to replace it. If you have some extra cheese on hand, this is the best option to replace milk in your mac and cheese. We grated the cheese finely so that it would melt fast when added to the cheese powder and butter mixture. Anything fatty and somewhat creamy might save your milk-less Kraft Mac and Cheese. You could also be interested in reading about the potential effects of mac and cheese on newly removed dentition- can you eat mac and cheese after wisdom teeth removal?

Can You Make Boxed Mac and Cheese with Just Water?

Yes, you can prepare Kraft macaroni and cheese without any milk or butter – but not just water. Water won’t bind the ingredients and provide flavor.

Choose the best milk substitute from our list of options below. Use margarine, cream cheese, heavy cream, roux, margarine, mascarpone, or even ghee as a butter alternative. Unfortunately, it’s not just milk that’s missing at home.

Perhaps you have a dairy allergy or are responsible for feeding someone who does. For years, macaroni and cheese have been a household favorite. It is a game that both children and adults alike. If you can cook it without butter or milk, as we recommend, you’ll still have an excellent traditional dish for the folks who come to your table.

Coconut milk, goat milk, cashew milk, whipped cream, non-dairy cream, soy milk, or good old oat milk are the best non-dairy milk substitutes for mac & cheese. Some of these have more robust flavors than others and may subtly modify the taste of your mac and cheese, while others will have no effect at all. When substituting any of these non-dairy milk products, use a 1:1 ratio.

If you’re substituting because you don’t have or can’t get milk, sour cream, cream cheese, butter, or margarine are all suitable milk substitutes in mac & cheese.

Can You Use Water Instead of Milk for Kraft?

No, you need something more substantial than water if you want to continue cooking your Kraft Mac and Cheese.

You might not think it’s feasible to make a portion of creamy and tasty macaroni and cheese without milk, but it’s relatively simple. But what can you use in place of milk in mac and cheese?

As it turns out, you may substitute a variety of substances for milk while cooking this delectable delicacy. In this piece, we’ll go over a few of the most acceptable options for replacing milk in mac and cheese without losing the flavor or texture of this classic comfort dish.

Sour cream works well as a milk substitute in mac & cheese because of its rich, creamy flavor. However, your meal will taste tangier and creamier when you use sour cream instead of milk, which isn’t always negative. Some mac and cheese recipes include sour cream as well as milk.

If you’re managing your weight, you might want to avoid using sour cream as a milk alternative in mac and cheese. It has a lot of fat and calories, which isn’t good if you’re trying to lose weight.

How Do You Make Kraft Mac and Cheese Without Milk?

You can add heavy whipping cream or heavy cream instead.

If you have an extra carton of heavy cream in your refrigerator, you can easily add it to your mac and cheese without affecting the final product. You’ll end up with a dish that’s incredibly creamy and rich but not as thick as sour cream mac and cheese.

However, these other varieties of cream, like sour cream, are high in calories. If you add heavy or whipped cream to your mac and cheese, the caloric content of your meal will soon rise, so keep that in mind before using this milk substitute.

When cooking Kraft macaroni and cheese from the box, you’ll note that the recipe calls for both milk and butter to be added. If you’re out of milk, increase the amount of butter (and a little water) to make up the difference. Like the other foods on this list, butter isn’t the healthiest option. However, when it comes to mac and cheese, a creamy component is required to make the dish as tasty as possible.

Can You Put Pizza in the Oven Without a Tray