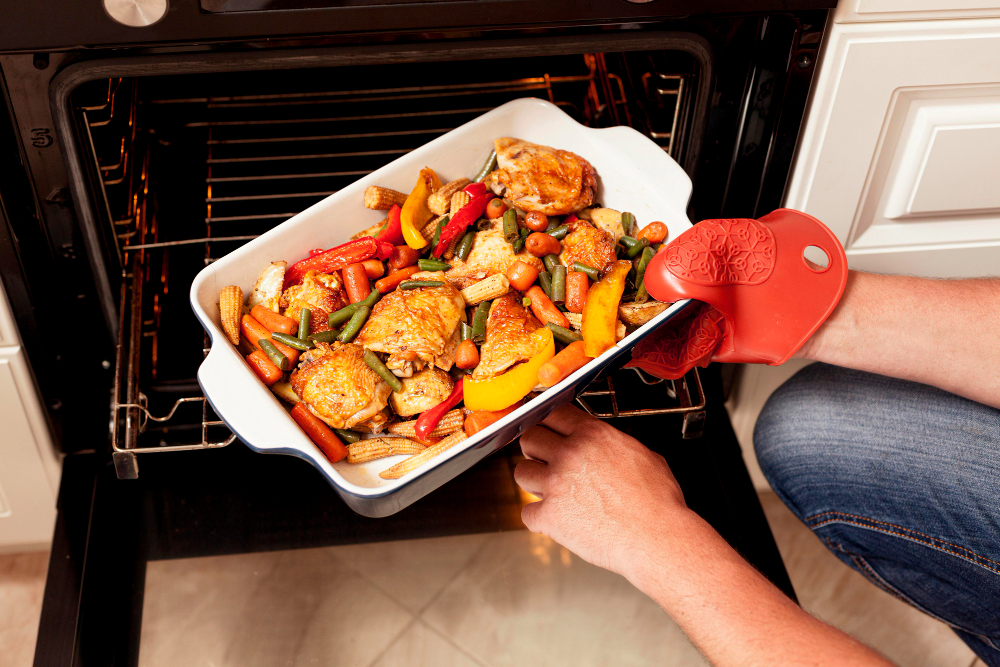 It’s impossible to know if food is safe to eat by sight or smell. Now that’s a piece of cake! Handling, cooking, cooling, and storing food appropriately are the most effective means of ensuring its safety. So throw aside anything you’re doubtful of.

Bacteria and viruses might be discovered on animals, people, and food that had not been properly cooked. Even if you aren’t able to go to see or smell any of these, bacteria are everywhere.

Uncooked food, unclean hands, counters, and utensils all contribute to the spread of bacteria in a kitchen. Bacteria are invisible to the naked eye; therefore, a seemingly clean object may be dirty. To avoid the spread of bacteria, it is necessary to wash your hands and any implements you use to make meals.

Bacteria can thrive if they have the right conditions: food, warmth, water, and time to grow. Fruits, vegetables, meat, fish, and eggs are just a few of the many high water content items.

Chilling food properly and avoiding keeping food out at room temperature for more than two hours will help prevent the growth of bacteria. In addition, the hazardous germs will be destroyed if the food is cooked to the correct temperature.

The “Danger Zone” is where bacteria thrive under warm conditions. Room temperatures of 22°C to 23°C (72°F to 74°F) are ideal for the growth of harmful microorganisms.

Temperatures between 4°C to 60°C (40°F to 140°F) are ideal for bacteria growth. The temperature at which your food must be cooked and reheated is 75ºC (167ºF). Keeping cold foods below 4°C (40°F) is also vital to avoid hazardous bacteria from forming in food before eating it. Always keep cold food cold and hot food hot!

Microorganisms cannot grow in a freezer because they require water to thrive. So bacteria can’t develop if the water is frozen.

How Long Does It Take to Kill Bacteria in Oven?

Hyperthermophilic bacteria can thrive in temperatures as high as 121ºC (250ºF). However, most dangerous bacteria and viruses can be eliminated within minutes of boiling at a temperature of 75ºC (167ºF) or higher.

At least 63°C (145°F) for steaks or entire cuts of beef, pork, lamb, and veal, 71°C (160°F) for the same meats ground, and 74°C (165°F) for all poultry, raw meat and poultry should be roasted to the proper temperature. When reheating food, such as leftovers, you must ensure that it is heated to at least 74°C (165°F) and stored in a small container in the refrigerator for optimal cooling and to prevent the growth of bacteria.

Many microorganisms can be found in the food you prepare and the surfaces you touch daily. But, if left out in the open, your dough’s bacteria count can double in as little as ten minutes.

Yeast bread rises because of the fermentation produced by microorganisms like lactobacilli. However, salmonella, which can be found in raw eggs, is one of the most dangerous.

Food that has been heated breaks down the structure of germs, rendering them ineffective. Salmonella, a germ caught from undercooked poultry and eggs, can cause diarrhea and vomiting because heat destroys most foodborne bacteria and viruses.

In some cases, spores, latent germs that can withstand extreme environments, extend the lifetimes of some bacteria. Several bacterial spores require heated to 121ºC (250ºF) for several minutes to die, such as C. botulinum bacterium. Although not all bacteria create spores, baking cookies at high temperatures of 149°C to 177°C (300°F to 350°F) rather than on the dashboard of your car on a hot summer day is preferable.

At What Oven Temperature Does Bacteria Die?

Cold and hot temperatures affect germs, such as viruses, bacteria, and fungi. There are many instances of this, such as the flu virus flourishes in cold weather. According to the World Health Organization (WHO), the COVID-19 virus is resistant to all of the temperature measures used to “prevent” or “kill” infection, including exposure to cold weather or snow, taking a warm bath, using hot hand dryers, and exposure to ultraviolet lights.

Bacteria stop growing at 65°C (150°F) and begin to die at higher temperatures. There aren’t nearly as many of them left at 75ºC (167ºF), so you can safely eat the meal without becoming sick. Organisms that have survived will begin to grow again if the food temperature returns to the danger zone.

Cooking salmonella requires a temperature of at least 65°C (150°F). Contaminated cooked meals and undercooked food primarily cause salmonellosis. Prepared foods can get infected because they contact unclean surfaces or utensils.

Temperatures between 60°C to 65°C (140°F to 150°F) are sufficient to destroy most viruses, and boiling water is safe against pathogens such as bacteria, viruses, and protozoa. As a general rule, Trivedi advises using a temperature of at least 75ºC (167ºF) to kill germs like Legionella, which is ubiquitous in water.

At least 75ºC (167ºF) is ideal for cooking food. At this temperature, most foodborne illness-causing bacteria are rendered inert. When cooking, be sure to use a thermometer to monitor the internal temperature of the dish.

Preparation and storage of food go hand in hand when cooking. As a result of poor cooking, many people suffer from food poisoning. Contamination of raw and cooked foods using contaminated hands, cutting boards, or utensils can also result in the development of food poisoning in some individuals.

Meat, poultry, fish, and eggs, in particular, should be thoroughly cooked to eradicate the majority of foodborne illness-causing microorganisms. If you’re preparing a meal, you should aim for a temperature of at least 75ºC (167ºF) when cooking. When food is ready, it should be consumed as soon as possible, eaten at a temperature no higher than 63°C (145°F), or chilled, covered, and kept in the refrigerator or freezer.

When making items containing raw eggs, take extra precautions. Pregnant women, small children, the elderly, and anybody with a chronic condition should not consume raw eggs. These foods can be tainted by bacteria found on or inside the eggshells, leading to food illness.

Cooking in the microwave is a time-saving and convenient option. However, they might also cook food unevenly if not utilized properly. This could result in undercooked food or a lack of uniformity in the temperature of 75ºC (167ºF).

Wait until the steam has dissipated before putting food in the fridge for subsequent use. This ensures that the food is kept out of the danger zone as quickly as feasible. Putting larger dishes in shallow trays or dividing them into smaller parts allows them to cool more rapidly.

Do I Need Heat Resistant Cable For Oven

Can You Heat Drinks In A Toaster Oven