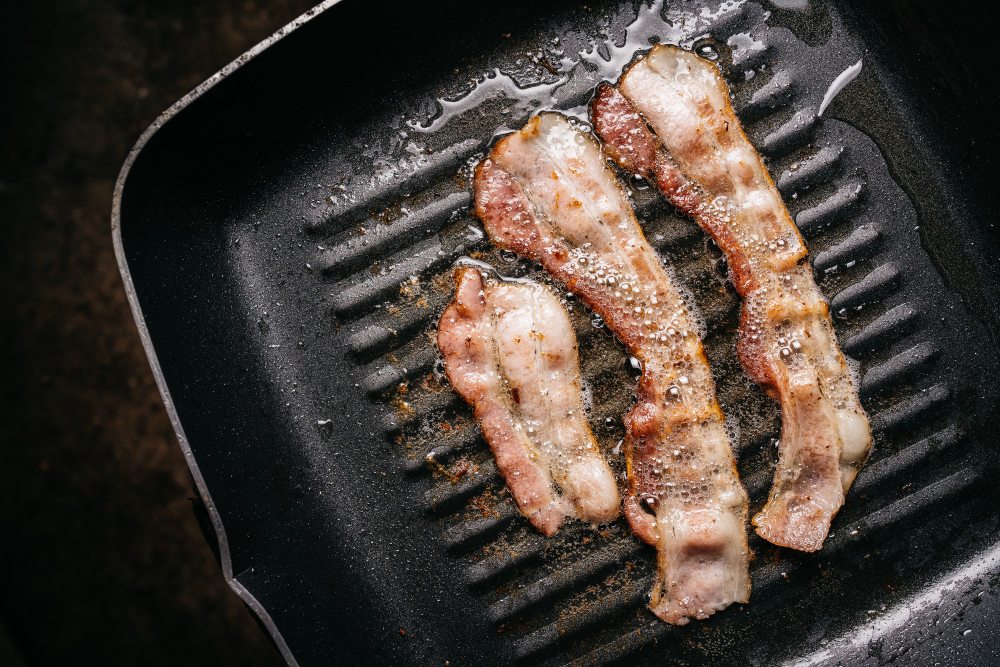 For morning, nothing surpasses the aroma of toasted bacon!

So, adding oil won’t help because bacon cooks beautifully in its fat. Therefore, bacon should not be fried in oil. When the pan is heated enough, the bacon’s fat content will dissolve, and cook the bacon. Also – can you heat a nonstick pan without oil?

Baked bacon is a popular choice for many individuals. If the bacon’s being baked, there is no need to add any additional oil at all. However, if you’re frying or baking, you’ll need a pot that can handle a lot of liquid fat after the process.

Several forms of bacon are referred to as “lean” because of their lower fat content. There is no need to use light oil for cooking other forms of meat such as British bacon or American bacon, as they contain more fat than necessary.

Bacon with less fat, bacon with fat removed, slices from closer to the bone, and center cut are all actual options for cooking bacon. Cooking them without additional oil may or may not be possible.

You may need to combine a few drops of oil with your bacon if you think it needs it. However, to prevent the bacon from sticking, use only a tiny amount.

In these instances, applying a small amount of oil is okay. However, the distinct flavor of the bacon fat should override the olive oil’s flavor.

Can You Cook Bacon on the Stove Without Oil?

Bacon can be cooked without oil if you have the variant with streaks of white fat. For lean bacon variants, you can drizzle a little bit of oil or cook it with splashes of water.

Bacon is a highly versatile meat, as it cooks in just a few minutes and can be utilized in a wide range of cuisines. However, back and lean bacon have lower fat content than streaky bacon, so streaky bacon doesn’t need oil for cooking.

This versatile ingredient may be used in everything from bacon sandwiches to pasta meals to soups to salads and quiches, even if it is only a sliver of it. Cook the bacon first, let it cool down, and then cut it into smaller pieces with a pair of kitchen scissors before using it in a dish.

You can eliminate bacon spatters and get precisely crispy slices with a rising oil-free method. It’s even easier than you think.

Water is all you need to get this to function. In a skillet, add a small amount of water so that your slices are entirely submerged. Then, raise the temperature to its maximum. When the water attains a rolling boil, reduce the heat to medium. Using this method, you’ll achieve a crisp yet delicious product that isn’t brittle.

It doesn’t take long for the bacon to fry. However, there is enough fat to warrant draining after approximately ten minutes of cooking, so be sure to mind it while you’re frying.

Do You Need to Grease a Pan for Bacon?

Lard is formed when the hot fat from bacon is cooled down and solidified into a fatty mass. This bacon fat is enough to grease itself during the cooking process, limiting the excessive use of oil.

Bacon already contains a lot of fat, so there’s no need to add more. Even the leanest chunks of bacon have enough fat to keep the skillet from sticking, even if they’re sliced thinly.

Does Bacon Need Oil or Butter?

Is it possible to fry bacon in butter? It’s a firm no because the bacon’s fat will grease the pan.

Creating a mess while cooking bacon is not unheard of. But, despite its speed, preventing a messy stovetop and cleaning up afterward is critical.

Hugely, this is due to the amount of oil that bacon releases. While cooking, this will splatter and must be disposed of appropriately.

On the other hand, Bacon grease is not the enemy, as it contributes significantly to the flavor of our bacon friend. As a result, frying bacon does not necessitate additional oiling. You can use this rendered fat to prepare other items.

Bacon can be fried without the need for additional oil or butter. Bacon’s lipids provide enough lubrication to keep the pan from sticking. However, if you’re using leaner bacon like the center-cut or turkey, you can use butter or oil.

Before you begin cooking, make sure the frying pan is excellent. Then, rub the pan with a slice of cold bacon.

This is why adding butter to a chilly pan won’t work: the butter won’t melt fast enough to start the bacon. Also, butter adds a lot of taste and is highly oily because it’s mainly fat.

Butter does not work well as an oil substitute when it comes to cooking bacon. You’ll end up with a buttery mess if you add in your bacon slices, which could lead to uneven frying of the bacon flesh.

Can You Heat A Nonstick Pan Without Oil