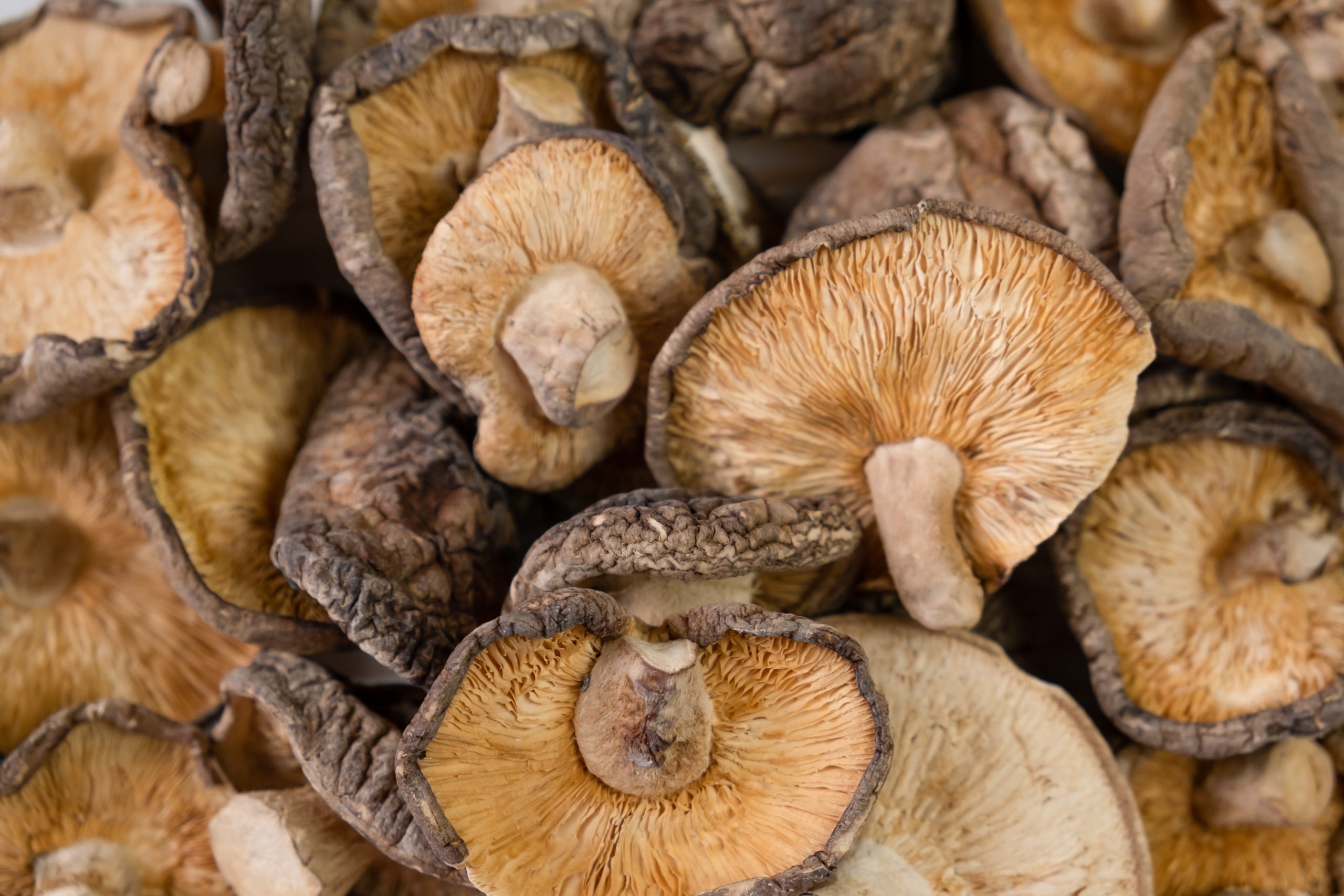 Close up of dried shiitake mushrooms on wooden background.

Shiitake mushroom caps are typically used only in recipes, with the tough stems being discarded. Try utilizing those stems in your soups and stocks instead of just throwing them away! But undoubtedly, it’s brilliant for a home cook first to ask which part of mushroom can be eaten before experimenting.

Shiitake mushrooms have huge, dark-brown, umbrella-like caps and relatively slender, cream-colored stems, making them easy to identify when fresh. Compared to crimini or white button mushrooms, these shrooms are a little more expensive per pound—but the results are well worth the additional expense.

Shiitake mushrooms, especially the fresh variety, are an excellent source of both iron and protein. Eating them may also help lower cholesterol, enhance immunity, and even fight some types of cancer when combined with other beneficial effects.

Sautés, risotto, soups, and more benefit from adding mushrooms because of their meaty texture and earthy flavor. Shiitakes taste better when thickly sliced or quartered rather than chopped due to their meatiness.

Is It OK to Eat Mushroom Stalks?

Mushroom stems can, in general, be eaten. However, since there are many distinct kinds of edible mushrooms to choose from, the stems have become just as delectable as the caps.

Fungi, on the other hand, are what mushrooms are. Most of what we know about these mushrooms is that they’re spongy, have stems and crowns, and have gills underneath. While not all mushrooms have this appearance, the majority of edible mushrooms do.

In the kitchen, mushrooms can be used as either meat or a vegetable. Vegans commonly use mushrooms in place of beef to bulk out, texture, and flavor veggies.

Most supermarkets and shops carry fresh mushrooms. The best method to learn about some of these foods is to ask the seller what they’re called and how they’re typically prepared if you have no idea.

It’s a popular myth that the poisonous content of shiitake mushroom stems is why they’re discarded. Do not be alarmed; the fibrous stem and soft crowns of this plant are both edible.

The stems of mushrooms can be eaten. Many fungus enthusiasts have asked us this question. Mushroom stems vary in terms of taste and ease of consumption.

If you’re thinking about how edible mushroom stems are, you can choose the king trumpet mushroom, also called the king oyster mushroom. The stem makes up most of this mushroom’s structure, with only a little cap on top.

You can eat the king trumpet mushroom’s stem and cap, which are both delectable. Even when cooked, the stem keeps some firmness and takes on the flavor of the food it is cooked with.

Mushroom cell walls include chitin, a fibrous material comprised of carbohydrates. Humans have difficulty digesting chitin; therefore, the cell walls formed of chitin make it difficult for people to benefit from the mushroom’s beneficial nutrients when eaten raw.

The stem is the most desirable component; for others, it is the least desirable. It’s easier to digest and absorb mushroom nutritional elements because their chitin barriers break down when cooked.

What Happens If You Eat Shiitake Mushroom Stems?

So, are mushroom stems safe to consume? You certainly can!

Because of their rough and woody stems, shiitake mushrooms are frequently asked about mushrooms. Unfortunately, these mushrooms aren’t delectable because they’re too fibrous, but they’re still flavorful.

The stems of most mushrooms aren’t poisonous when eaten. There is good news, though: you may include them in your meals to cut down on waste while increasing your intake of nutrients. This is true if you’re preparing using cultivated mushrooms.

The nutritional profile and content of the edible fungus can provide a wide range of necessary nutrients. Making use of the stems not only saves you money but also provides an additional serving dish on the table.

Just remember, not all the stems are edible or have much flavor, so there’s no point in saving them. On the other hand, mushrooms like portobello, crimini, chanterelle, porcini, or white button mushrooms, for example, have beautiful stems that can be eaten.

Mushrooms are high in vitamins, minerals, protein, and antioxidants, all of which are beneficial to your health. However, due to internal activities like metabolism, free radicals in the body can lead to oxidative stress if they build up to a high enough concentration.

While most species of mushrooms are safe to eat, you should exercise caution while eating wild mushrooms. Toxins and heavy metals in wild ones can be lethal due to their excessive concentration.