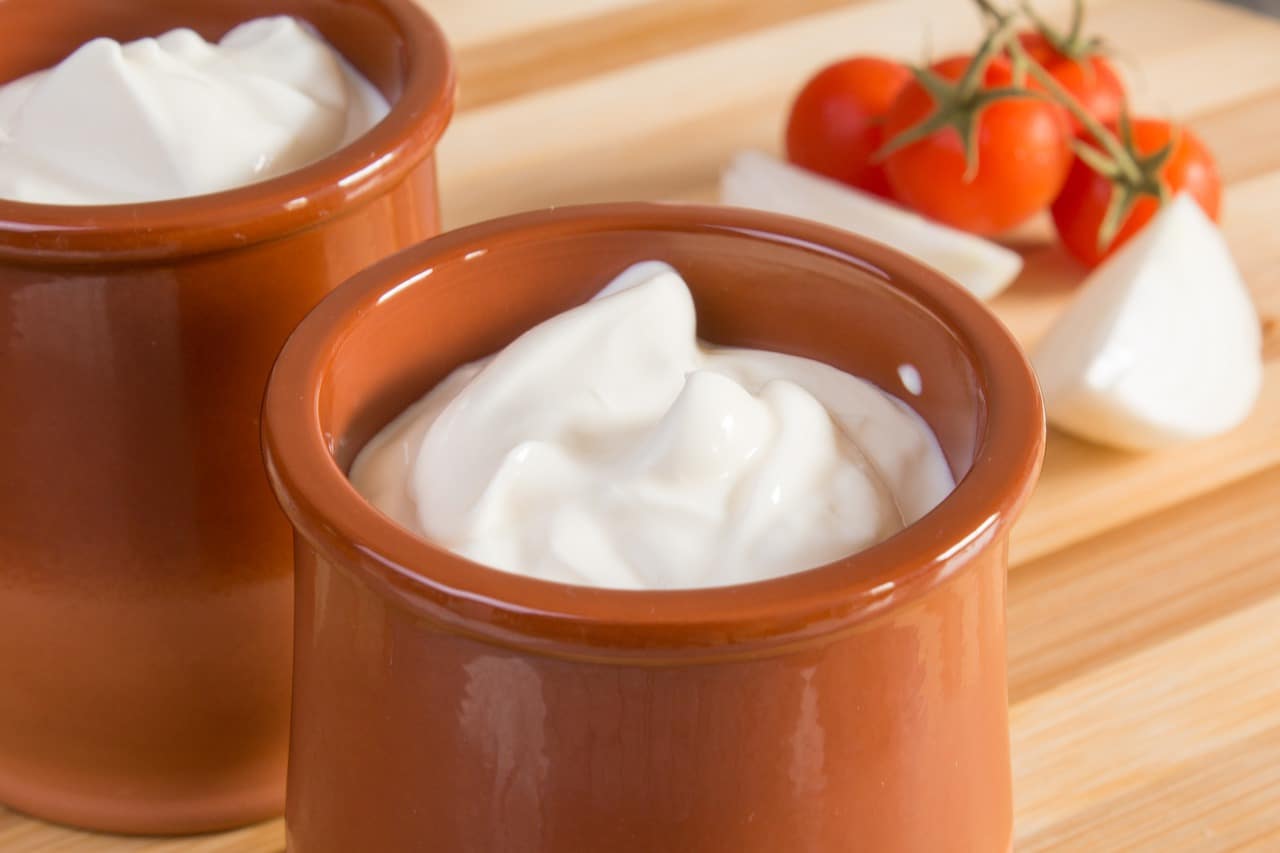 How Is Sour Cream Different from Yogurt?

As we have mentioned in other blogs, one can easily get lost with the myriad of dairy products derived from milk. There’s the slightly salty curd, the probiotic yogurt, and then there’s sour cream.

To fully understand how to use dairy products and make worthwhile substitutions, it would be best to know how these things differ from each other.

Yogurt is primarily a fermented product. Yogurt is manufactured after heating milk to a certain temperature below boiling point. Good bacteria are then added to the resulting yogurt, which kick-starts the fermentation process.

Yogurt is different from curd, as curd is treated with an acidic catalyst to make the proteins split. Yogurt can be successfully used for cooking different kinds of dishes – you have to be careful, so it doesn’t suddenly curdle. Even ordinary milk curdles when exposed to too much heat, so this is something that you can experiment on if you want to continue using dairy products when cooking.

If you want to avoid the grainy texture and appearance of cream, milk, and other dairy products while cooking, it would be best to familiarize yourself with the cooking process and the temperature range at which milk products begin to curdle. This way, you won’t struggle with cooking with milk or any other cream-based product in the future.

Yogurt and sour cream are very similar. Sour cream is the product of adding bacteria and lactic acid to heavy cream and regular milk. As the lactic acid and bacteria work the sour cream, it becomes sourer and sourer, and voila – the sour cream is eventually produced. There is another variant that is equally confusing at times – crème Fraiche.

Crème Fraiche is interesting because to produce it, you need some cream (the unpasteurized variety), and you have to put it in a container and let it sit at room temperature for some time. Crème Fraiche is still made the old way in Europe. In America, the cream is first pasteurized, and then some bacteria are added so that it would turn to crème Fraiche.

Can I Substitute Yogurt for Sour Cream in Stroganoff?

Beef stroganoff is a hearty beef dish that requires sour cream in most recipes. It is a traditional dish and has a very robust flavor profile, made even better by the dairy component. Since having all the possible dairy permutations at home is impossible (unless you are a very dedicated home cook), you probably find yourself struggling to meet certain recipes’ demands at certain times.

Never fear, yogurt is here to save the day. Since the main difference between the dairy products we have been discussing is their fat content and how they have been fermented or split, we can confidently recommend using yogurt for making beef stroganoff.

The ratio is equal here, so if the recipe asks for two cups of sour cream, use two Greek yogurt cups. Greek yogurt is best for cooking because it has a higher fat content than other similar products, and it’s the closest that you can get to the creamy consistency required in many dishes.

Greek yogurt has a tangier flavor profile than sour cream due to the composition of sour cream and yogurt and how they are made. If you feel that the extra tanginess might affect your dish’s sensitive flavor profile, use the ¾ ratio first and then taste the dish.

If there is no strange tanginess or the tanginess is just right, then add more Greek yogurt. The majority of the time, you will get a good result, anyway, so there’s no reason to worry when making the substitution.

Experts have always recommended the full-cream version of yogurt, which is just a fancy way of saying that you need more fat content when cooking. Since Greek yogurt is already healthy, you can use Greek yogurt in a variety of dishes and get good results. Nonfat yogurt is not a good idea when working with heat, so reserve nonfat yogurt for simple snacking and salads.

For the most part, dishes with meat (and even vegan dishes) need fat to taste right. When making substations, it’s always a good idea to use the right proportion of fat and protein in the thickening agent.

Can I Use Sour Cream Instead of Yogurt?

Yes! Sour cream, crème Fraiche, and yogurt all have similar flavor profiles and textural properties, so you can use any of these products when cooking or preparing dishes. Sour cream can be used inversely, the same way that you can use Greek yogurt when you have run out of sour cream.

For dishes that require an extra kick of tanginess, you can add either an acidifying agent or add more sour cream. However, the problem with acidifying agents is there is a high risk of sour cream splitting, and this is never a good result.

The splitting of fat and proteins in the dairy product will produce a very grainy appearance on the top, with masses of milk proteins clumping together. To avoid this problem, work with the dairy properly and add more if you have to, but watch the temperature.

Are Pineapple Citrus: The Detail You Must Know