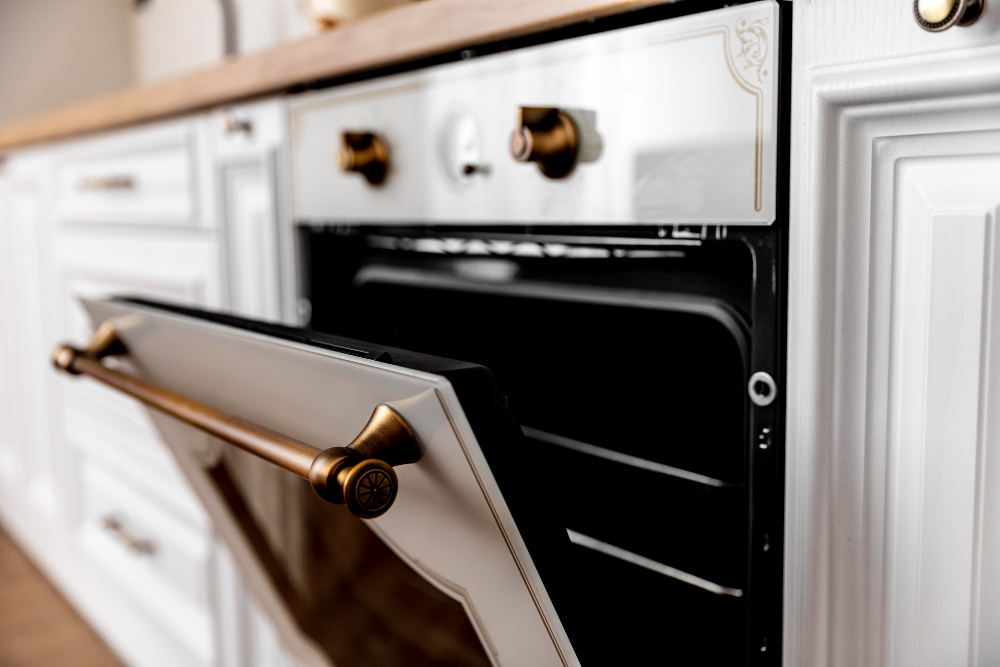 Have you ever set out to create a delectable meal or dessert only to think, “why does my oven smell so bad?”

For the sake of clarity, let’s clear one thing: these odors are not usually related to the actual operation of the oven. So if you look attentively at the structure of a typical kitchen oven, it should be clear that no odor-causing elements are there.

Fiberglass compound, which is utilized extensively to create insulation within the device, is the most frequent material found in newer and more modern ovens. Although there is a chance that this material can discolor, there is no evidence that it will emit any odor.

Unfortunately, a lack of adequate cleaning and maintenance is the primary cause of poor oven odors, including the smell of burning plastic.

The stench of burning plastic is familiar when it comes to brand new electric ovens. The protective chemicals employed during production to make the oven’s chamber insulation should burn off instantly when utilized for the first time. However, this is not always the case. In some cases, it may take numerous uses before the odor begins to fade.

Some of the most familiar causes of foul plastic odors include:

What To Do If It Smells Like Burning Plastic?

There are numerous methods for removing the pungent odor of burning plastic. Whether your oven is fresh out of the appliance store or has been faithfully serving your home for years, all oven risks developing burning plastic smells. New ranges should be given time to “burn-in,” while older ovens should be thoroughly cleaned.

For Used or Older Ovens

So, even though your stove has been used hundreds of times, the same nasty odor persists. Because this is a very case-specific issue, we recommend contacting the manufacturer first, as it may be a problem with that unique model. Once that is ruled out, you can continue inspecting your appliance for any signs of damage or malfunction. Before checking it for any signs of burned cable insulation, make sure it is correctly unplugged from the electricity network.

Accidentally placing plastic in the oven is more common than you might think, and plastic does not do well in high-temperature environments.

There’s no need to be alarmed; the plastic smell is far worse than the cleanup itself.

You can use either the cold or warm methods of removing any plastic in your oven once you’ve located the melted gunk.

Allow the oven to cool until the plastic hardens, making it easier to pull off with the cold approach. You can also speed up the process by using ice. The plastic can then be removed from the oven with a knife or a scraping tool. This is the cold method.

If the cold method is unsatisfactory, you can try a warm way. First, use heat to remelt the plastic with the warm approach. Then, increase the heat in your oven and scrape the plastic with a wooden spoon after softening it.

Is Burning Smell from Oven Normal?

Most items baked in an oven will include some fat. (Most meat products and the oil/butter used in baking/grilling cakes, lasagnas, and other dishes have this characteristic.)

Fats tend to melt and turn into oil or grease throughout the cooking process. In addition, because of the high temperatures used during the baking process, grease is frequently dispersed throughout the oven cavity. Some of this grease may evaporate and be deposited across the oven’s internal surface area.

Some grease deposits are visible on your oven’s glass surfaces and can be readily removed. However, the main problem is that burnt grease isn’t always apparent or visible. In addition, this secret grease coating tends to thicken with time. This layer of fat is primarily responsible for the release of foul odors.

More importantly, this residue poses a safety hazard. Another primary source of foul odors from the cooker or oven is food particles. Frequently, charred food fragments can become caught between oven trays or racks, or food leakage can occur (possibly from gravy). If this goes unchecked, it can cause unpleasant odors to develop while you’re using the oven.

Why Does My Oven Smell Weird When I Turn It On?

The smell is probably because it needs to be cleaned out thoroughly.

Noxious oven odors can harm any food you plan to bake or roast. Fortunately, understanding how to get rid of oven odors is a relatively straightforward task. Most ovens on the market now have a self-cleaning option that can significantly simplify your oven cleaning routine. The presence of a porcelain enamel layer over the oven walls, which forms an acid and heat-resistant surface, distinguishes these ovens.

The oven achieves a maximum temperature of roughly 1000°F (538°C) during the self-cleaning procedure.

Some leftover food ingredients, spills, and grease are burnt to ash at those temperatures. The self-cleaning feature has the potential to emit a large volume of smoke as a side consequence. This can be significantly decreased by thoroughly cleaning your oven before turning on the self-cleaning feature. When using the self-clean function, ensure no plates (metal, porcelain, or Teflon) are left in the oven. Any oven trays or racks must also be taken out. Do not despair if your range does not have a self-cleaning function.

There are a variety of simple solutions for removing unwanted odors from cookers and ovens.

Several high-quality commercial oven cleaners are readily available to make the cleaning process more manageable. First, spray the cleaning inside your oven, paying attention to where the food residue is most visible. Allow the cleaning product to sit for ten minutes, then wipe away with a damp, clean towel. Next, you can remove stubborn spots with a scrub brush.

Can You Heat Drinks In A Toaster Oven

Can You Use Normal Bricks For Pizza Oven

Can You Clean Utensils with Isopropyl Alcohol