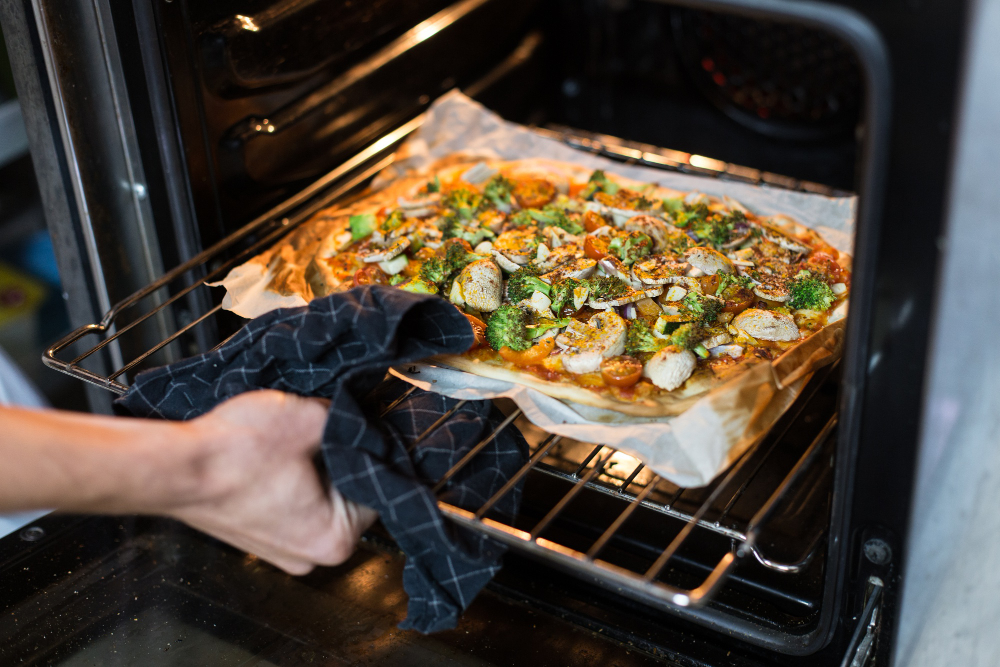 Can Leaving a Pizza in the Oven Cause a Fire

You may ask this once in your baking time: can an electric oven cause a fire?

In most circumstances, the oven will not catch fire if there is nothing in the stove that could catch fire and the oven door is securely closed. However, an oven fire may occur if a pan of food, grease, or food crumbs is left in the oven for a lengthy period.

According to the New York Fire Department, unattended cooking is the cause of 33 percent of all house fires in the city. When you leave food in the oven alone, it is conceivable that it can burn or that you will forget how long it has been cooking, which are both risky. Keep an eye on the food you’re cooking, and set a timer to remind you to remove items from the oven when they’re done.

However, your tasty pizza may heat the oven to the point where other objects inside the oven (such as an overflowed pie) catch fire. The oven’s fire resistance may be overwhelmed if there is enough material.

The most common source of smoke is fires caused by food particles catching fire on the oven’s heating element or the bottom area of the range. Allow the oven to cool completely before wiping away any charcoaled food particles that may have remained after the self-cleaning cycle. If you leave those tiny pieces in the oven for an extended time, they may continue to smoke.

Will A Pizza Catch on Fire in the Oven?

There are several reasons your oven may catch fire: When you cook something with a lot of oil and grease, it can splatter and start a fire. For example, when you bake your pizza, the pizza sauce may overflow, drip to the bottom, and create a tiny fire.

Ovens are often intended for this type of scenario, and the interior’s resistance to heat prevents the fire from spreading quickly. However, your burning pizza may heat the oven sufficiently to cause other objects inside the oven to catch fire. In addition, the oven’s fire resistance may be overwhelmed if there is enough material.

Bacon, pepperoni, and cheese. Anything that splatters and produces grease as it cooks has the potential to set fire to your pizza dough party. If left for an extended period, these chemicals will primarily cause these scorching flames.

If a fire starts in the oven, the most important thing to remember is to keep the door closed, turn off your oven, and keep your eye on the flame. This will keep the fire under control, and it should go out in a few moments.

What Happens If You Leave a Pizza in the Oven Too Long?

If you leave your pizza in the oven for too long, you will likely overcook it (among other things that will happen if you don’t mind your pizza while cooking). Also, keep in mind that the more toppings you use, the slower the cooking process becomes. This might result in an unevenly cooked pizza with an overcooked or burnt crust and undercooked toppings on thinner-crust pizzas.

Soggy pizza can be caused by various factors (such as toppings that release excessive amounts of water), but the most common cause is that the pizza was not baked in a hot enough oven. Allow time for your range to reach 500°F (or as close to that as possible).

When it comes to pizza, how do you know when it’s done? It either has perfectly done edges but is underdone in the middle, or it has an adequately cooked middle but overcooked advantages (occasionally, I get lucky and get overdone edges with an underdone center too). I cook it according to the package instructions, which call for 15 minutes at 450°F. If you mean your mozzarella is tough and stringy, when you remark, “More than color, I think it’s also a matter of texture,” it’s overcooked. If this is the case, the mozzarella (along with the other toppings and the entire pizza) is being overdone and exposed to heat for longer than it needs to be.

How do you fix a pizza that isn’t fully cooked? First, reduce the oven temperature to 350°F and lower the oven rack to the lowest position to cure an uncooked pizza. Cook for another 3 minutes after that. It’s done when the bottom is golden brown. If not, continue to cook the pizza for 3 minutes at a time until it is done.

Can Food Leave in the Oven Catch Fire?

Yes, food left in the oven can eventually catch fire, like anything else. The consequences can be lethal and tragic when a range is left on. A house fire increases if you go your electric oven on. There is a risk of fire and carbon monoxide poisoning if you leave a gas oven on all night.

An oven or kitchen stove can catch on fire for various reasons. For example, if a pan of food or fat is left in the oven, a fire may break out. This means that while cooking with a lot of fat, you’ll want to watch your range.

The New York City Fire Department’s accounts show that unattended cooking is the top cause of home fires, reporting 33 percent of all fires. In addition, inadvertently burning food in the oven is common when left unattended.

Cooking or heating the house are the two most common reasons individuals leave their kitchen stove or oven all day and night. However, ranges were never meant to be used when heating a broad area. Heating your home this way is a waste of money and energy.

There is an auto shut-off feature on most newer toaster ovens—but this does not imply that you may leave it on without supervision. Staying in the kitchen as you cook is always a good idea.

Can An Electric Oven Cause a Fire?

The Top 3 And Best Skillets Without Teflon 2022

Do You Need A Radiator In The Kitchen

The Top 3 And Best Skillets with Two Handles 2022

The 3 Best Kettles for VW Campervan