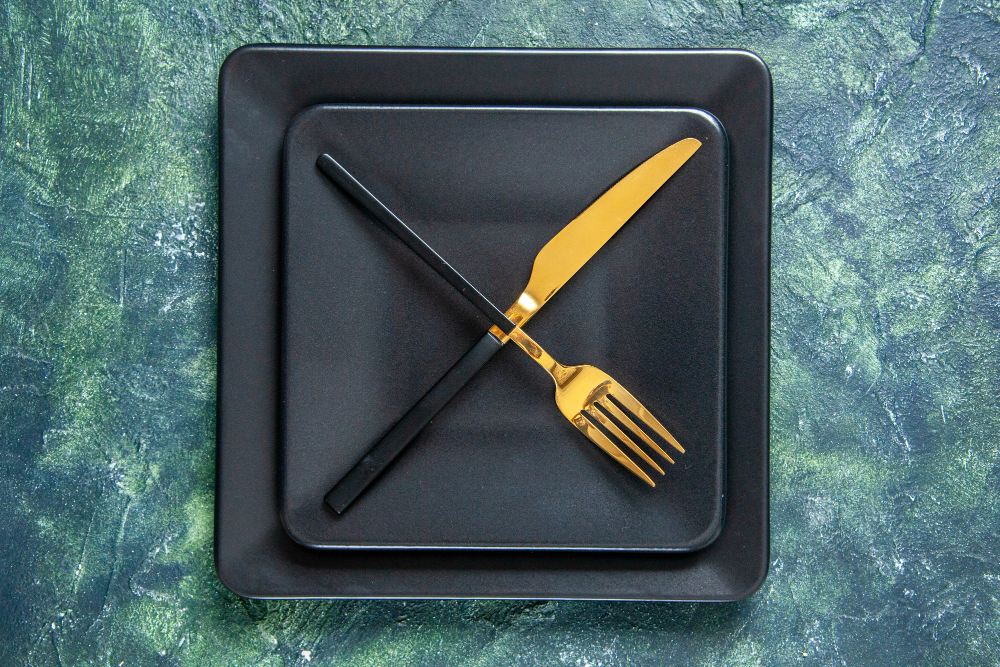 What Does It Mean When You Cross Your Cutlery

Another visual cue for where to place your utensils is provided for a multi-course meal with numerous courses. Place your fork and your knife in a cross formation on the plate, with the fork facing vertically and the knife pointing horizontally, producing a cross with the fork and knife.

Proper cutlery technique demonstrates a high level of class and respect for the individuals serving you. The essential thing about this feature is that it offers your waiter visual cues as to the status of your meal.

It is possible to convey that a diner is “resting” in various ways. For example, you have two options: keep your fork and knife parallel and separated or arrange them in an X. In some Asian restaurants, the x-style is reserved for patrons who do not enjoy their food.

Leave your fork and knife in the same manner as you would in the continental or European style, except that your fork tines must be facing down rather than up. The only distinction between the two is the position in which they are resting. Following continental practice, your fork and knife should be crossed in the shape of an X, not parallel to each other.

What Does Crossed Cutlery Mean?

When the diner crosses their knife and fork over their plate, you inform the server that you have not finished your meal. They instruct the waiter to remove their dish and proceed to the next meal when you set your knife and fork together crosswise across your plate.

How many times have you pondered the proper method to set your silverware on the table or how to arrange your plate on the plate? Should they be crossed or placed on the sides of your plate, or should they be retained with their faces up?

How you arrange your cutlery may have a symbolic significance. For example, it may indicate something you are unaware of, such as asking for more meals, conveying that the meal was satisfactory, or suggesting that you have finished it.

There’s more to utensils than meets the eye, just as there are too many other things in life. In truth, these everyday instruments bear a great deal more weight than just the meal you’re stomping around with.

Because they’re symbolic instruments, they can signal whether you’re finished with a meal or still working; depending on how you hold them, they can reveal where you’re from; and even create hashtag-inducing media meltdowns.

What Does It Mean When You Turn Your Fork Over?

People living outside of the United States and Canada argue that the four steps are excessive since they require the diner to transfer the fork between their hands rather than holding it in the same hand the entire time. Because of this procedure, American-style dining is also referred to as the “zig-zag” method.

If your fork and knife are made of plastic, there is a reasonable probability that you will be emptying your plate into the garbage. In any other situation, placing your silverware specifically to indicate that you’ve finished eating isn’t particularly considerate of others.

When you turn up at your table, your server comes by to welcome you and take your drink order. After ordering food, your server comes back to check on you and then asks for the bill. Servers are acquainted with this pattern and adhere to it to provide exceptional service to their customers.

For a server, this is beneficial since it keeps the flow going—they don’t have to ask whether you’re finished and then wait for you to decide whether or not you want to support picking at it: and they have to clear your plates when everyone is finished.

What Do Silverware Positions Mean?

As you chop away at your meal with a knife and fork, it’s possible to look like a troglodyte. When attending a dinner party, dining in a restaurant, or other formal events, it is customary to utilize these utensils. It’s not difficult, but at first, it may feel awkward.

Place cutlery neatly side-by-side on the plate indicates that you are finished eating or thought the dinner was fantastic while arranging them in an ‘X’ signifies dissatisfaction with the meal.

For starters, the fork is on the left side of the dish, while the knife is on the right side.

Try placing the utensils down at an angle at 4 o’clock when you’re done, and see if it helps. Instead of being on its side, this is the preferred position, like a bridge, or inverted, laying off the plate.

The fork and knife should be placed in an X arrangement on the dish only when the meal is over. The waiter will know you’re not done until you say this to him.

The knife and fork tips should rest in the plate’s well at ten o’clock, with the handles parallel to the plate’s right rim and the grips in the four and four o’clock positions. Knife and fork tines can be positioned in any way, but the blade should be facing inward.

When you’re at this position, the server knows you’re done. As a result, plates may also be cleared more efficiently, and the utensils are less likely to tumble.

What Do Two Crossed Spoons Mean?

Your use of silverware, like a picture, can convey a thousand different messages. You want to be confident that you are speaking to the appropriate people. Proper cutlery technique demonstrates a high level of class and respect for the individuals serving you.

It is possible to have thousands of superstitions, and even those of us who are intelligent, sophisticated, and pragmatic can fall prey to illogical beliefs that are entirely unfounded.

Numerous food-related superstitions have survived and continue to be a part of our religious ideology. For example, to show respect for one of life’s needs, most people who spill salt automatically throw it over their shoulders without any hesitation.

The use of two spoons is also associated with a set of beliefs that have been integrated. The presence of two spoons in a bowl represents the wish for the pair to be bonded together.

When two spoons are mistakenly placed in a dining set, it indicates that a female will marry soon. Likewise, finding two spoons in the same teacup signifies that the couple is getting married.

Does Cutlery Include Forks

What Is the Best Wood for Kitchen Countertops: The Factors...

What Do the Symbols on Plastic Food Containers Mean?

The Easiest and Best Way to Clean Painted Kitchen Cabinets

What Is the Best Brand of Air Fryer?

Why Do Plates Smell After Washing

Does an Air Fryer Replace a Deep Fryer?