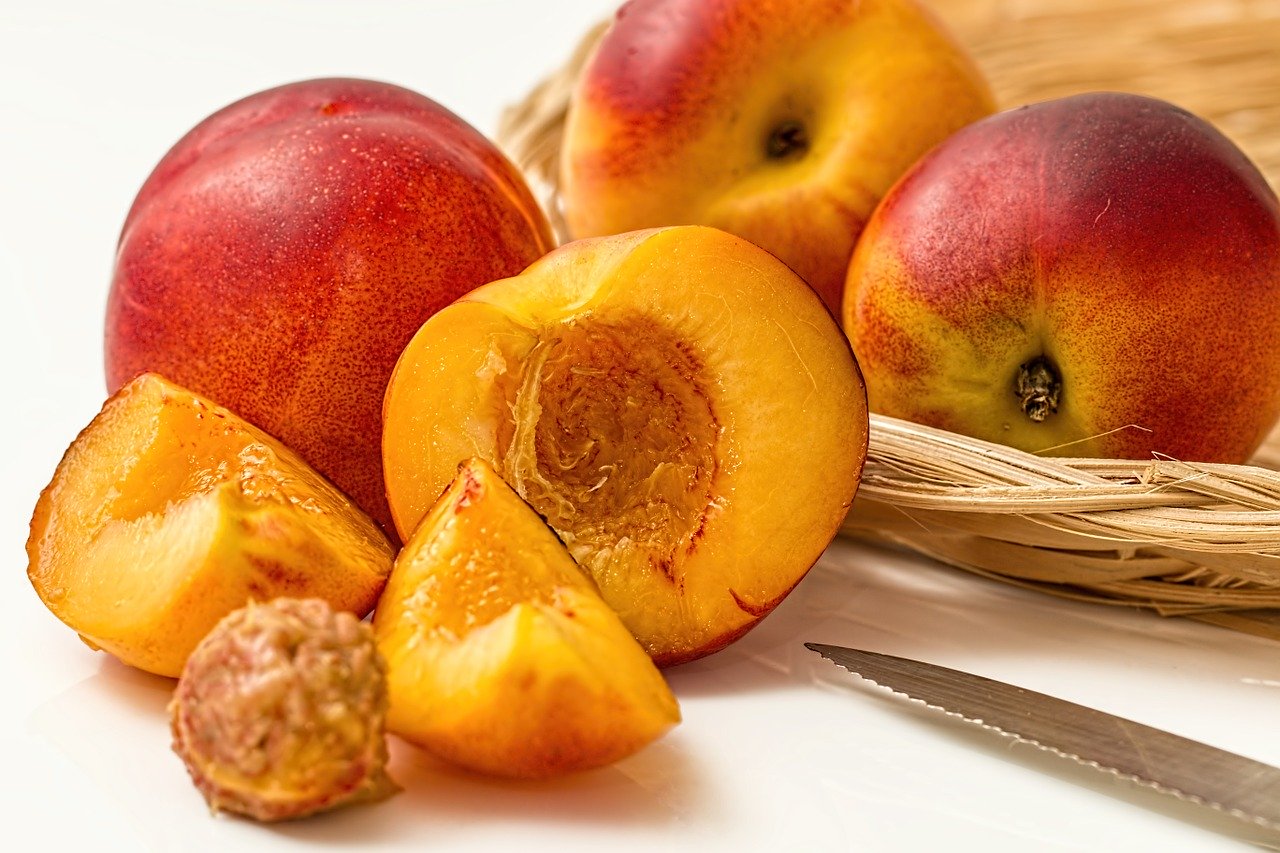 What’s the main difference between nectarine vs. peach?  Nectarines and peaches have always been popular summertime fruits in the United States. Technically, stone fruits, peaches, and nectarines have always confused people because they seem to be so similar, yet completely different in many respects.

Peach vs. Nectarine: Are Nectarines and Peaches the Same?

The difference between peach and nectarine is so small that the naked eye cannot be seen: a gene variation. Technically, nectarines and peaches are the same fruit, but a genetic change causes one to have fuzz while the other becomes super smooth. Nectarines do not have a natural fuzz coating, even when ripe.

The genetic variance can be traced to one allele that has something to do with the formation of the fuzz. Peaches can also be freestone or with stone, depending on the cultivar. Clingstone peaches have pits or seeds that cling to the flesh. Peaches can also be either yellow or white.

Nectarines, on the other hand, have a genetic variance that causes the fruits to develop and mature without the fuzz.

All nectarines have exceptionally smooth skin. Other differences, though minute, include being slightly firmer and smaller than your average peach in terms of aroma, nectarines also tend to have heightened aromatic qualities. The downside of growing them, however, is that they are more prone to developing diseases. Like regular peaches, nectarines can also occur with or without stone. In terms of color, a nectarine can also be white or yellow.

Peaches Vs. Nectarines: Do Nectarines and Peaches Taste the Same?

Yes, nectarines and peaches almost taste the same. In terms of sweetness and acidity, there aren’t many differences, so instead of figuring out which one is sweeter, we suggest that when you are shopping for either nectarines or peaches, opt for the fresher fruit instead.

Even though nectarines sometimes possess a slightly better flavor, if the peaches are fresher, then they’re better for whatever purpose you may have. You can ascertain the freshness by comparing the aroma of both fruits. Which one smells fresher and sweeter? The freshness of the smell is indicative of the ripeness and age of the picked fruit.

On the other hand, if their fruit barely has any smell, you may have under-ripe fruit. Under-ripe fruit will not taste as good as the ripe ones, so you must let these ripen first before using them. It’s easy to ripen peaches naturally. The fastest way is to place them in paper bags and sealing the top. This locks the natural ethylene gas produced by fruits. Ethylene helps promote ripening, and the higher concentration of this gas around the said fruits, the better off they will be.

Both nectarines and peaches need to be consumed in a day or two after they ripen. If you happen to have purchased a large quantity of both fruits and they are all ripening quickly because they are close to one another, then you have two choices: either refrigerate your fruits to extend their freshness a few more days or freeze them so that they can be stored for a long time.

Are Nectarines a Cross Between Peaches and Plums?

Contrary to common beliefs about the nectarine, it is not the product between the crossing of plum and peach. To lessen the confusion, let’s say that nectarines are a fuzz-free variation of the peach. Nectarines can grow on peach trees. Interestingly, all this genetic mix-up is that even the seeds of nectarines and peaches are uncertain about who they are.

For example, when planted, a nectarine seed can end up growing into a peach tree, with fruits that are all fuzzy. The only way to ensure that nectarine fruits will emerge is through grafting. Viable nectarine branches are grafted onto mature peach trees, and they will continue blooming and bearing nectarine fruit. This process guarantees that only nectarine fruit will emerge from that specific branch.

Are Nectarines Peaches Without the Fuzz?

We can say that nectarines are peaches without fuzz, since they are genetically the same, with only an allele of difference. So when someone asks you about it, don’t fret –say that these are the same fruit, one with fuzz and the other without the covering.

What are the Types of Peaches?

Over one dozen cultivars of peaches in the United States, including large variants such as the Angels, Arctic Supreme, August Pride, and Belle of Georgia. Small to medium variants including the Babcock, Bonita, Cardinal, Coronet, Early Amber, and El Dorado. Now, if we were going to look at peaches from other perspectives, as their primary attributes, the following groupings would emerge freestone, semi-freestone, and clingstone peaches.

There are two kinds based on their color: the yellow ones and white ones. White-fleshed peaches come from variants that are cultivated in Asia. These including Nectar and Babcock cultivars. And finally, we have classification based on genetic differences. Donut peaches have a flatter structure, and they look almost like donuts with the depression in the middle. Donut peaches often have a smaller pit and are clingstones. Nectarines, as we have already discussed, differ from peaches because they lack the peach fuzz.