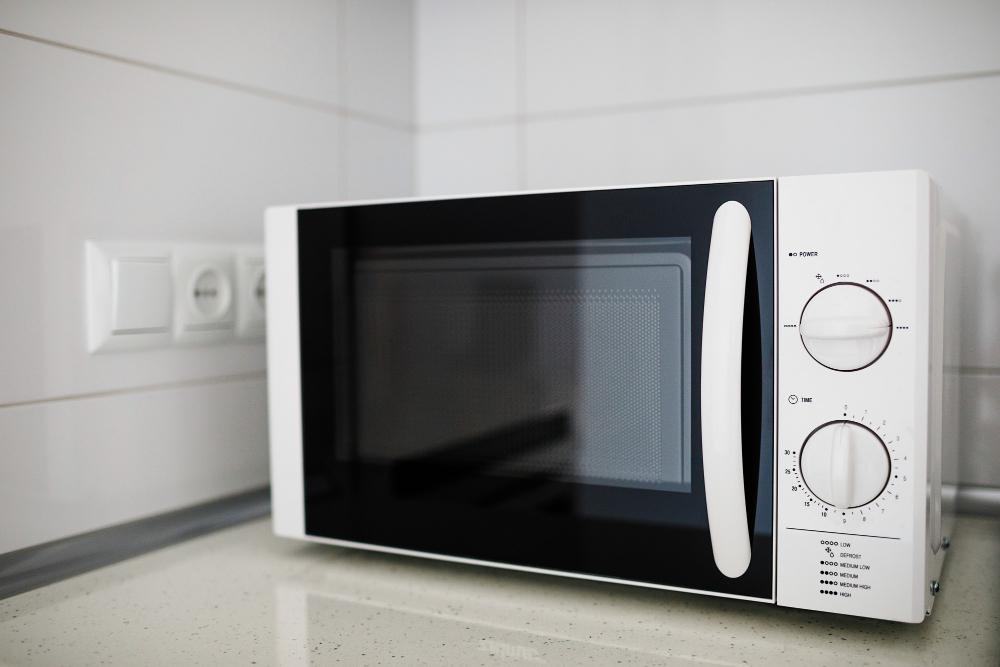 Food is cooked in a microwave oven because the water molecules absorb microwave radiation and heat the surrounding food. Microwave ovens cook food by causing intermolecular friction among the food’s molecules.

Microwave energy triggers the vibration of water molecules, resulting in heat due to increased friction between the molecules.

If microwaves were able to escape from the microwave oven, they might have a similar effect on your tissue. On the other hand, modern microwave ovens are built to prevent microwave leakage. So the only time you should be concerned is if the oven door is broken or damaged, in which case you should not use it.

Interestingly, microwave radiation heats the skin and other bodily parts similarly. For example, people stationed at large microwave towers in frigid climates used to warm themselves by standing in front of the microwave ovens, essentially radio wave generators.

The radiation is particularly detrimental to the body regions that are unable to adequately transmit heat out from the body, such as the eyes. Heat transfer, according to experts, could explain why people (such as fast-food workers) have headaches after being exposed to leaking microwave ovens.

There may be some confusion about how microwave ovens affect people – it’s the radiant heat from the food being cooked inside the microwave oven that people feel, not the radiation from the magnetron tube. Almost everyone would like to know something about how a microwave oven functions, including “can a power outage damage a microwave?“

Why Did My Microwave Lose Power?

Because the magnetron tube in a microwave oven deteriorates over time, its power decreases. A magnetron tube is a high-voltage technology that generates oscillating waves that bounce around the stove and cook food by combining magnetic and electrical fields.

It is the source of energy and power in a microwave oven.

The microwave oven’s power decreases as the magnetron tube becomes weaker and less effective. Therefore, if you discover that the microwave door does not seal properly, it is time to replace your microwave oven.

Microwaves typically have a safety device that prevents them from working if the door is open, but the door may have a crack in the seal, detrimental to your health. In addition, regular exposure to the microwave’s electricity can cause health problems, so make sure to inspect your door regularly.

How Long Should You Keep a Microwave Before Replacing It?

The average microwave oven lasts about seven years with typical use, and with heavy use and poor maintenance, it lasts much more minor. However, as a large family becomes more reliant on the device to heat snacks and leftovers and thaw meals, it may need to be replaced every four to five years.

If the wrong items are placed inside, the lifespan can be lowered further, resulting in irreversible damage or fire danger.

Your microwave will eventually need to be replaced, but there are a few instances where repair is the more cost-effective option.

Do Microwaves Get Weaker with Age?

The average life of a microwave magnetron tube is 2,000 hours of operation. That means a standard microwave oven should be able to cook and heat meals for 2,000 hours before losing power. This may not be a significant amount of time until you consider how frequently you use your microwave oven. You probably only use it for a few minutes or seconds at a time if you’re like most people.

For example, it would take 22 years to achieve the 2,000-hours-of-operation milestone if you used the microwave oven for 15 minutes every day.

Although a magnetron tube has an average life of 22 years, various circumstances can shorten that time and cause the microwave oven to lose power more quickly. They include regularly putting too much metal in the microwave oven, powering it with an incorrect voltage, improperly mounting the appliance, obstructing the microwave oven’s waveguide, and utilizing the device at the top limit of its heat tolerance.

You may not need to replace your microwave ovens every year as a popular business does. However, if you have a microwave oven that is several years old and it has lost power, the magnetron tube is most likely nearing the end of its life. So, it might be time to consider getting a new microwave in that scenario.

If you observe any sparks, smoke, or a continuous burning odor while your food is heating, you may need to replace your microwave. If any of these indicators appear, immediately switch off your microwave (or unplug it if feasible) and consider replacing it. However, if your relatively new microwave oven is having difficulties heating or cooking food, you should contact the manufacturer for warranty repairs before purchasing a new microwave oven.

What Are the Signs That A Microwave Is Going Bad?

The following are signs that you may need to replace the unit,

Can You Use Decorative Plates For Food

What Size Oven Do I Need For A Turkey