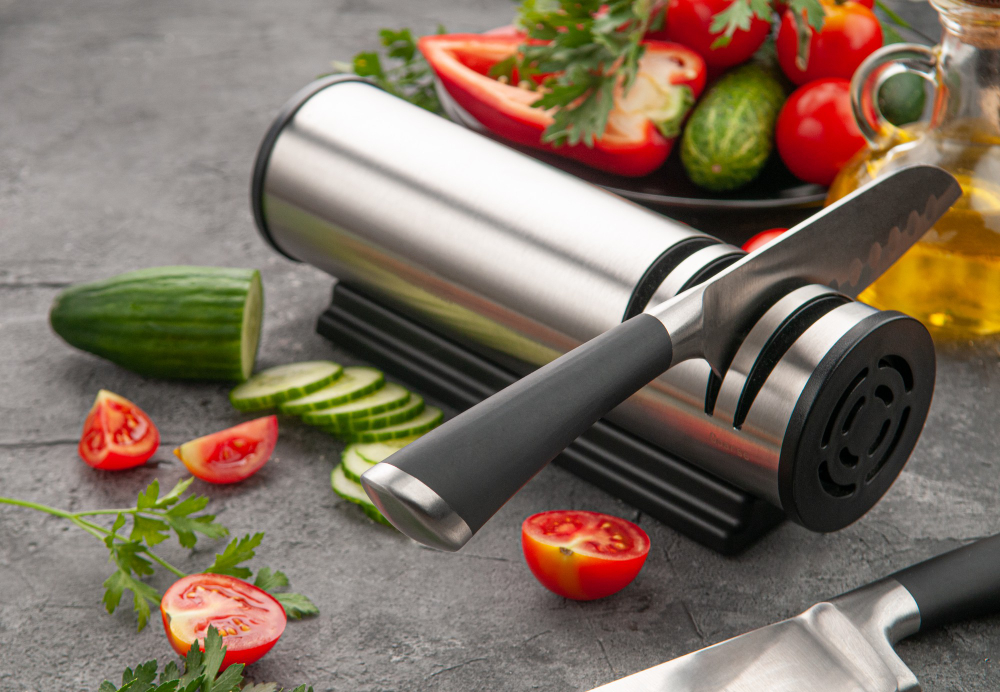 The traditional sharpening stone does not hone; instead, it unfolds the edge to keep your knife sharp. This newly straightened knife edge is still flimsy and folds easily, and the edge eventually breaks off or folds too tightly to be straightened with steel and must be rebuilt. Using steel necessitates a great deal of skill and practice. The steel should be used after every ten to fifty cuts to be more effective before the edge bends over too much to be corrected by the same type of straightening implement. Proper sharpening reshapes a stronger edge by removing the older, weaker knife edge.

It’s safer to sharpen your knives at your house using widely available diamond abrasive home sharpeners that are safe for quality blades unless the professional knife sharpening service uses a sharpener that will not overheat (detemper) knives or remove too much metal. Traditional grinding stones are used by many professional knife sharpening services, which remove too much metal and detemper (overheat) the knife edge. Sharpeners that produce sparks are detempering the knife. It’s possible that the person doing the sharpening isn’t adequately trained. Knives may take several days or weeks to return. Today, professional-grade home knife sharpeners consistently produce a razor-sharp edge every time they are used. Built-in precision angle guides prevent guesswork, and 100% diamond abrasives won’t detemper exquisite blades. The edge formed with a traditional sharpening stone will not be as sharp or as strong as an edge created by a professional home sharpener with built-in angle guides unless the user is highly competent. A knife’s edge must be precisely symmetrical to stay sharp for longer. It will fold more quickly if it leans to one side. There are no angle cues on traditional stones to aid in the creation of asymmetrical edges. They take time and effort, and they are time-intensive.

Not necessarily – but some of them may be more effective than others. Simply put, the sharpening system that you use has an impact on the outcome.

Sharpening a knife is a strenuous task, and each time, it eliminates a small quantity of steel.

A dull knife has a higher risk of slipping than one that has been sharpened. A cut caused by a dull blade will also take longer to heal due to the cellular damage it causes.

Sharpening stones will also return your knives to a razor-sharp edge, although the process will be more gradual. In exchange, you get better outcomes and don’t have to worry about dulling your knife.

There is a learning curve to be aware of. The knife blade isn’t being pulled or pushed through a succession of slots. Instead, you’re employing a set of abrasive blocks known as whetstones. Each stone has a grit or coarseness level. Look for a deal on a set of sharpening stones that includes a coarse, medium, and fine grit stone for convenience.

Particle size in a sharpening stone is referred to as grit. A 220-grit stone, for example, has granules that are just sixty to one hundred microns in size. Sharpening stones with a determination of 6,000 have particles that are smaller than 5 microns in size. A lower grit number indicates that the stone is more abrasive, ideal for dull or damaged blades. The work of smoothing and polishing the new sharp edge is completed using a high gritstone.

Sharpening stones require lubrication for your knife blade’s steel to glide effortlessly across the surface. Water or oil is commonly used as a lubricant. For this reason, these knife sharpening stones are also known as water stones or oil stones. The producer of the stone will advise you on which of these lubricants to use. Using oil to lubricate a sharpening stone is a messy prospect for most individuals. Instead, choose water if you have the option. Then, cleaning up is a breeze.

Should You Sharpen a Knife Every Time You Use It?

Depending on how often your knives are used, they should only need to be sharpened every few months; however, I would recommend getting them professionally sharpened every 1-2 years. A honing steel is excellent for keeping a straight edge on your knife daily, and an electric or pull-through sharpener will help you keep your blades sharp all year.

Honing re-aligns the microscopic teeth in the blade, but unlike “sharpening,” it does not remove steel to generate a fresh edge. Honing can be done regularly, even after each use. When you sharpen a knife, you draw a small piece of steel off the blade. Knives may only need to be honed once or twice a year, depending on how frequently they are used.

How Many Times Should You Run a Knife Through a Sharpener?

There are three methods for restoring a sharp edge to your knife. Sharpening restores a dulled or damaged edge, whereas honing re-aligns a worn edge and honing is an optional component for a razor-sharp outcome. Depending on usage, the average knife has to be sharpened every 1-2 months. Sharpening is the process of recovering a dull or damaged edge with a coarse abrasive such as a diamond plate, stone, or abrasive belt. During this procedure, you’ll try to repair damage to your knife’s edge by removing material. Weekly, sharpen your knife. Honing does not draw much material, but it performs a fantastic job of leveling your knife’s edge and reducing any blade rolls. Honing will prevent you from needing to sharpen as often if done regularly.

If you desire a razor-sharp edge on your blade, strop it every day. Stropping a blade’s edge polishes it. Not all knife users like a polished edge; in other circumstances, such as cutting a zip tie, a “toothy” edge can be more helpful. A safe knife is sharp, and it’s something we’ve all heard. Including these actions in your routine will ensure that your knife has the edge you require anytime you need it.

Does Sharpening a Knife Remove Metal?

A hone, sometimes known as steel, is a rod-shaped tool made of steel or ceramic. A hone’s purpose is to keep a sharp knife sharp, and it is not intended to be used to sharpen a dull knife. “Steel a knife” is a phrase we frequently hear. However, it’s only a matter of employing a hone.

In most cases, honing a knife does not necessitate the removal of metal. Some hones with a diamond face can extract the metal, and ceramic hones can eliminate tiny amounts of metal, too, but we don’t use a honing tool to remove the metal in general.

How Long Do Knife Sharpeners Last

Do You Have to Season Hard Anodized Cookware?

How Long Do Knives Stay Sharp