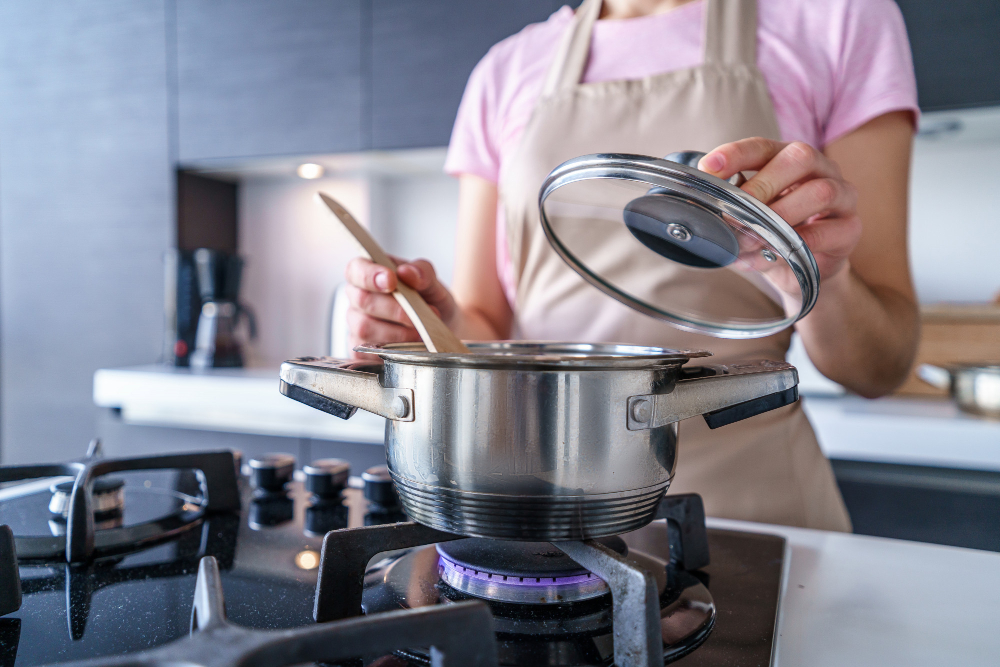 Can You Use the Same Utensil to Cook Pork and Poultry

Most people don’t associate food safety with kitchen tools. We sometimes use the same utensils we’ve used to handle the raw meat for cooking.

The logic behind it is that we thought that the heat from boiling food is enough to kill bacteria that can trigger foodborne illness. Unfortunately, even those typically vigilant about food safety overlook the dangers of improperly handling their utensils when cooking raw meat.

However, the science of food contamination is very different from this faulty reasoning. Toxic bacteria can be transferred through raw meat into cooked meat through a cooking utensil if certain precautions are not taken.

Raw meat germs can quickly move to ready-to-eat items and cause foodborne illness. Therefore, once the kitchen utensil encounters raw meat, it should not be used to handle cooked meat.

So, how can you use your utensil to prepare raw meat safely? Cooked meat should be handled with clean utensils. Using kitchen utensils to take raw fish follows the same idea.

Can You Use the Same Spatula for Raw and Cooked Meat?

The same spatula can get contaminated if it gets in contact with raw meat throughout the cooking process. When it comes to catching food poisoning, cross-contamination is the most common method.

Cooking heat will essentially sterilize any equipment you’re using. Possibly. In most cases, utensils and tongs are only in touch with the pan for a short time; thus, any foodborne bacteria are not destroyed.

Using a spatula to mix cooked ground meat is a good idea when preparing it for a dish. When you use a spatula to stir raw ground beef in a frying pan, the spatula picks up bacteria from the raw meat.

Use a dish soap diluted in lukewarm water to clean the spatula after handling raw meat or a dishwasher. If you don’t own yourself a dishwasher, you can sterilize your spatula and other utensils by hand.

Most dishwashers use the maximum temperature setting to sanitize your spatulas and other kitchenware. However, even if you don’t have a sanitize option in your dishwasher, it will still clean your spatula more thoroughly than hand cleaning will.

It’s good to switch out your spatulas during cooking so that bacteria from the spatula don’t re-contaminate the meat. When the ground meat appears to be done, use a clean spatula to remove it from the pan.

Can You Use Same Tongs for Raw and Cooked Chicken?

Is it necessary to be concerned about contamination when cooking your chicken and rotate it with tongs? Is it time to switch them out?

Putting raw chicken on the grill and flipping it with the same tongs is not a good idea. However, even if the utensil is infected, the primary food is at temperature and renders it safe in seconds, so the risk is modest in practice.

Cross-contamination can occur if raw food items are mixed with cooked meat. It would help if you always separated raw meats from other dishes by using separate tongs, plates, and cutting surfaces.

If you’ve used raw chicken in the past, don’t use the same utensils again. For example, wash your spatula with hot water after using it to place a plain hamburger patty on a grill.

If raw meat was on the serving platter, you should fetch a fresh serving plate when your cooked meal is ready to be served. This is because the heat of your cooked poultry cannot kill the bacteria in the raw chicken blood.

Can You Use the Same Utensil to Cook Chicken?

Cleaning the stove surface and inspecting the utensils for cooking are part of proper meal preparation. When you eat raw chicken or other poultry products, salmonella can be passed to your kitchen utensil.

As previously noted, getting rid of microorganisms from a used utensil takes time. Therefore, cooking or preparing food with unsuitable tools is especially critical.

Make sure everything in the kitchen—hands, clothes, appliances, and countertops—is spotless before you begin cooking. While food is being prepared, it will also need to be kept clean and germ-free.

Raw meat and poultry should never be handled with the same utensils as cooked meat or poultry. To prevent cross-contamination, thoroughly wash them in warm soapy water between uses or use two kitchen tools, one for raw and the other utensil for cooked food.

If you’re cooking raw meat, don’t use tongs on the vegetables simultaneously. It’s possible that vegetables aren’t boiled long enough to destroy viruses that could be hazardous. However, cooked meat can be handled using tongs made from raw vegetables, as raw veggies do not pose the same health dangers.

Can You Use the Same Tongs for Raw and Cooked Meat?

To prevent food poisoning, it is critical to cook meat thoroughly. In addition, food prepared using the same tongs for raw and cooked meat should be avoided by vulnerable people, such as infants, pregnant women, the elderly, and those who are ill.

Bacteria can be found in any uncooked meat. Tongs used for either raw or cooked food can quickly spread these bacteria.

There is a layer of microorganisms outside a piece of meat, such as a steak or joint. Pork and poultry, for example, maybe contaminated from the outside with bacteria.

Using the same tongs to cook chicken is a no-no. Instead, raw and cooked protein should be handled with separate tongs.

You and your barbeque visitors could get sick if pathogens from raw meat get into the cooked meat. In this case, poultry offers the greatest threat, and the hosts were clear about it.

Tongs for raw chicken and tongs for cooked chicken should be used separately, just as you would use a different plate for each. Even if you’re grilling steak, switching tongs whenever possible is a good idea.

Do Plates Break in the Freezer

Why Are Utensils Magnetic