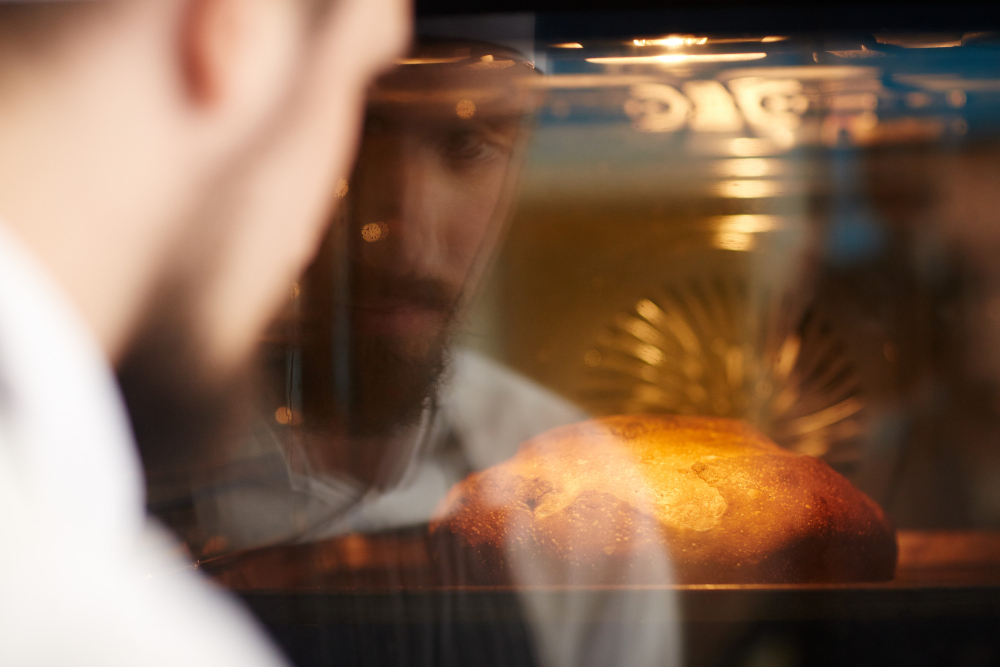 One of your oven’s most beneficial features may be the small light at the back. It permits you to observe the cooking process to ensure that everything is rising or browning as it should — and that you don’t wind up with a burned mess. But, most significantly, it illuminates your culinary masterpieces without requiring you to open the oven door.

If the appliance bulb is rated for use in an oven, it will work without a glass cover. The tempered glass cover protects the bulb from being damaged by pans and trays and keeps it clean from hot liquids. It’s good to order a replacement cover to avoid the inconvenience and expense of replacing the bulbs.

Other questions regarding safety concerns include: can you use an oven without a door, and people also ask why oven lights burn out quickly?

Can I Use My Oven If the Light Bulb Is Broken?

You can technically still use your oven even if the light bulb cover is broken, as everything inside the range has been rated to withstand the indirect heat produced by the heating elements or the flames. However, if you see some exposed wiring and other severe signs of damage, it might not be a good idea to use the oven unless you have an expert over to look at it. Oven repair is critical, and we don’t want any accidents, especially electrical accidents with the oven, which already involves a lot of heat.

What Are Light Bulb Covers For?

If the bulb is manufacturer-rated for use in an oven, it will work without a glass cover. The tempered glass cover protects the bulb from being damaged by pans and trays and keeps it clean from hot liquids. During cooking, the bulb cover protects the bulb from splatters. You can use the oven without the lid if you want to (temporally). However, if there are any splatters, the bulb may be damaged, so be careful what you cook at this time.

An indicator light is seen on most ovens. Once the oven has been preheated, the food can be placed inside to cook. As you add the food or open the door to check on the cooking status, the light may come on again. This is quite natural.

Do You Need an Oven Bulb?

The short response is yes, you do need an oven bulb.

Most of us are only aware of our oven light once it has gone out. Changing the light in your oven is considerably easy than you might believe. Follow our simple instructions to replace the bulb and avoid baking in the dark. Oven bulbs aren’t your typical bulbs. Appliance bulbs are the ones that are used inside ovens. These bulbs are made to function with appliances and withstand the extreme conditions found within many of the machines they’re utilized with.

Though it’s OK for things like your bedroom lamp or that overhead fan in the living room, a regular light bulb isn’t designed for an appliance, and it’s especially not designed for the super-hot interior of an oven. Because of vibration and temperature extremes, ordinary bulbs are prone to failure. A19 bulbs are used for regular lighting, while A15 bulbs are used for appliance lighting.

A15 bulbs were made with the intent of fitting into an oven or other device. There are a few distinctions between an appliance bulb and a regular lightbulb. The first and most noticeable characteristic is the amount of stress and strain that the lightbulb is designed to withstand. The standard halogen, incandescent, fluorescent, or even LED bulb will not be exposed to the same high heat as a bulb inside an oven.

The bulb in an oven is protected by a special chamber that makes it safe but isn’t heat resistant, which means it’ll still be exposed to the oven’s severe heat – which can reach 500 degrees Fahrenheit. A bulb for an appliance is intended – or qualified – to endure high temperatures without shattering. To begin, you must first obtain the proper replacement lightbulb. Most ovens utilize a regular 40-watt incandescent appliance light, although some may require halogen lamps with a power rating of up to 50 watts. Most GE ovens, for example, employ one of three types, depending on the model: A 40-watt appliance bulb is used.

An LED will not operate in this situation with gas or electric ovens. The classic halogen or incandescent bulb, suited for sustained high temperatures and composed of solid glass to protect the filament and be shatter-resistant, is the best bulb to use in ovens. However, heating elements are found in ovens.

Because LED bulbs tend to last longer when operated at average or cold temperatures, using or placing one inside the range may cause it to melt and perish. In addition, they have a shorter lifespan when exposed to heat. As a result, it is strongly advised against using an LED bulb inside an oven.

Yes, the usual size for most appliances is appliance bulbs. The tungsten filament burns hot and has a tremendously high melting point. Don’t worry; your appliance bulb will work perfectly in your oven.

Bulb blowing can be caused by a loose connection in the lamp fixture, especially if your oven is older or the light fitting has been influenced by oven shelves, trays, or pans. In addition, Arcing generates exceptionally high temperatures, which causes the bulb to blow. Appliance bulbs are engineered to endure the severe temperatures and conditions encountered in appliances instead of regular bulbs. A typical LED bulb with a standard E26 base will fit in an oven, but it will melt nearly immediately. Because LEDs do not generate heat in the form of infrared (IR) radiation like the sun, heating coils, or incandescent lights, they are cool to the touch. As a result, they’re ideal for regions where heat is an issue. It’s not true, though, that they don’t generate any heat.