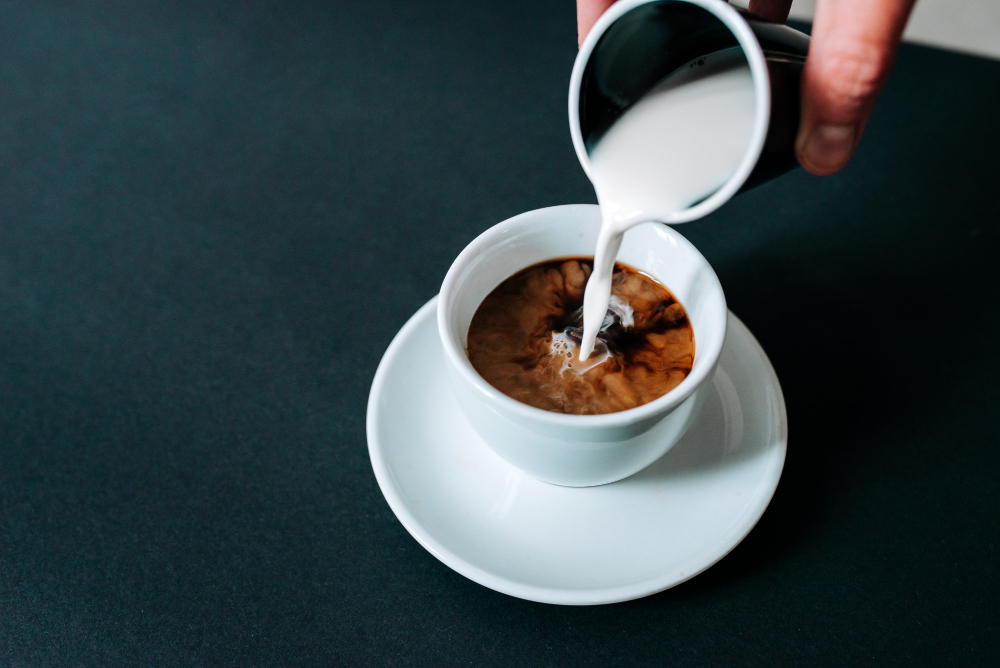 Creamer isn’t simply for sweetening your coffee in the morning. Instead, it may be used to infuse incredible taste into baked goods and pastries, changing breakfast and desserts into an extraordinary experience.

French vanilla, mocha, and caramel are just a few of the flavors you may use to add a delicate sweetness to your dishes, giving them a distinct flavor that will entice your tastes. But, of course, this also makes people wonder – can you use coffee creamer instead of milk?

However, you may be wondering if you can use powdered coffee creamer for milk and have the same results. Most people believe it is impossible, but the solution is simple.

Plain or flavored espresso creamers can be readily added to hot cereals in the morning. Add any less milk or water than usual, allowing the creamer to be a liquid substitute.

What Can I Use If I Don’t Have Heavy Cream?

Because heavy cream contains dairy and is high in fat, it may not suit everyone. Fortunately, if you want to substitute heavy whipping cream with a lower-fat or dairy-free replacement, there are many options.

Adding heavy cream to a dish is a necessity, and for a good reason. In addition to soups, sauces, handcrafted butter, and sour cream, it is used in various other foods.

Heavy whipping cream is created from the high-fat component of fresh milk and is commonly referred to as such. It is customary for a thick layer of cream to form on the surface of fresh milk if it is left to sit for a while.

Blending milk and butter is a simple, proven technique to substitute heavy cream in most recipes. However, the butter provides more fat to the milk, bringing it closer to the fat content of heavy cream.

1/4 cup melted butter and 3/4 cup milk can be used in place of a cup of heavy cream. This substitute is superb for cooking and baking rather than whipping.

To replace a cup of heavy cream, combine 7/8 cup half-and-half and 1/8 cup melted butter. Half-and-half can substitute heavy cream in some dishes, such as sauces and soups, without adding butter.

If you’re looking for a low-fat, low-calorie alternative to heavy cream, try this mixture. Cornstarch is used to stiffen the milk to mimic the flavor and texture of heavy cream.

To swap a cup of heavy cream in your recipe, use two teaspoons of cornstarch with a cup of milk and stir to thicken. This alternative is very beneficial in cooking, although it may change the consistency of baked items and may not whip as smoothly as heavy cream.

Can You Use Coffee Creamer in Baking?

Coffee creamer can be used to substitute cream for your baking needs. For example, pancakes and waffles are simple foods to include liquid creamer instead of milk to improve the flavor.

Incorporating creamer into your favorite recipes is a great way to add flavor to your favorite foods. Coffee creamer can dramatically change the flavor profile of everything from waffles and coffee cake to icings, pies, cakes, and ice creams.

Non-dairy creamer, often known as coffee creamer, is a milk or cream substitute commonly used to flavor coffee and tea. These creamers are made from a variety of components. However, most standard or well-known brands use casein, a protein-rich dairy product, in the presence of sodium caseinate.

Can I Use Non-Dairy Creamer Instead of Heavy Cream?

Heavy cream is a prominent dairy component that adds richness, taste, and body to soups, desserts, and casseroles. Unfortunately, some individuals seem unable to use heavy cream, but they can substitute other ingredients.

People who have dairy allergies or follow a vegan diet may not consume heavy cream. In addition, heavy cream is rich in saturated fat; therefore, those on a caloric diet may also want to avoid it.

People who are incapable or reluctant to use heavy cream can experiment with various alternatives. There are dairy-free, vegan, and healthy alternatives to heavy cream that may give savory and sweet recipes a rich, creamy texture.

Because heavy cream has extra fat content than milk, a milk and butter mix can be an adequate substitute in many recipes. This replacement will not whip up as well as heavy cream. However, it can be used in heavy cream in baked goods and creamy sauces.

Coffee creamer has a thicker and creamier consistency than ordinary milk. People looking for a healthier alternative to heavy cream might use evaporated milk to cut calories and saturated fat in a dish.

Can You Make Whipping Cream Out of Coffee Creamer?

Coffee creamer does not include enough fat to make a frothy heavy cream. Therefore, it can only be used to create a creamy froth for your coffee.

Can a Springform Pan Be Substituted for a Tart Pan