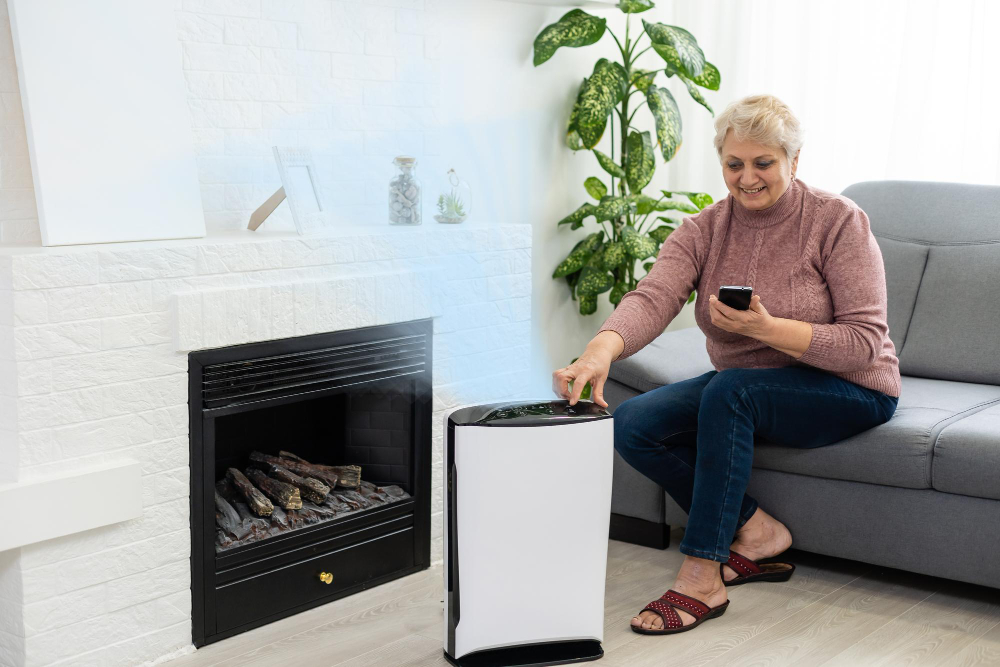 Can You Use Air Purifier and Heater at The Same Time

You can utilize a HEPA filter air purifier with a room heater; nevertheless, there are certain disadvantages also associated with air purification. The air quality within your rooms will dramatically improve if you use a device that engages in air purification. Some machines make use of UV C light as well.

Air purification devices with HEPA filters can help eliminate impurities from the air in your houses, such as unpleasant odors and airborne particles, and contribute to creating a more pleasant living environment. The most valuable idea you can do to improve your HEPA filter air purifier’s efficiency is to think about where best to position it in the same room. This applies to folks who use an air conditioner, too, and the folks who worry about the device filter when they constantly have boiling water in the space or high humidity.

Having alternative heating sources in any space can cause some issues with these machines, especially if the heat source involves some sort of fuel that can generate air particles. Be sure to consult with your manual if your heating source burns any kind of fuel that regularly produces fumes. The excessive use of candles, while not a source of heating, can also affect similar machines.

On the other hand, pollutants like pollen won’t be a problem at all. Pollen, pet dander and other contaminants are simply easy game for air purifiers. If you’re worried about bacteria thriving in the air despite having a cold environment, you’re in the right place. We already have the technology necessary to protect ourselves.

When choosing where to put your air purifier, there are a few critical aspects of the space that you need to take into consideration, whether or not you like keeping your window open. No matter what you do, your air purifier’s positioning will significantly affect the device’s effectiveness.

All doors and windows must be shut when using the air purifier. However, it is hazardous in the case of heaters, such as the reflection type room heater, the hot blower, or the halogen heater. They all devour the oxygen in the room, which is both exceedingly dangerous and damaging.

Yes, you can use oil as a heater; alternatively, you can purchase a hot and cold air purifier from the market. When in use, these devices generate heat, just like any other piece of machinery.

Keep your air purifier well away from any sources of heat to avoid it from overheating. For example, an air purifier can be harmed by exposure to direct sunlight near windows or heat from vents in a furnace.

Can You Run Air Purifier and Heater at The Same Time?

It should be no surprise that is simultaneously operating these two types of appliances is not an issue because various machines have built-in heaters and coolers. You should put your air purifier in the living space, mainly if you spend a significant amount of time in that space.

One of the most effective locations for air purifiers is near a window, door, or any other opening that allows outside air into the space. When in use, they generate heat, just like any other piece of machinery.

Keep your air purifier well away from any sources of heat to avoid it from overheating. For example, an air purifier can be harmed by exposure to direct sunlight near windows or heat from vents in a furnace.

Under no conditions should you ever leave your air purifier exposed to prolonged periods of direct sunlight. It is essential to ensure that the heat level of your air purifier and your heater is the same to avoid excess moisture formation.

A change in temperature between two locations can cause air evaporation, which then transforms the gases into liquid conditions. Liquified gas produces an absurd amount of moisture, which can make its way into your electronic devices.

These machines are beneficial at emptying the air of dust and other particulates but do not remove moisture from the atmosphere. If there is an undue amount of moisture present, it can cause damage to your air purifier.

There are a variety of elements that might determine whether or not your air purifier will have an impact on your electronic devices.

There is often a demand for a certain amount of practice and experimentation. Because of how ionic devices function, this is of utmost significance if you own an ionic air purifier, ionic purifiers remove contaminants from the air by creating negative ions.

How Many Hours A Day Should an Air Purifier Run?

Your home’s air is constantly shifting, and the effectiveness of your air purifier will be determined, in large part, by the unit’s size; this is especially important to consider if you want to clean just one room or the entire house. In most cases, turning on an air purifier for a few minutes each day is sufficient for the device to effectively clean the air in the room in which it is installed.

If you are only interested in one smaller space, half an hour may be sufficient to achieve the same result. It is excellent to leave a HEPA air purifier on day and night because it is meant to run continuously without overheating, breaking down, or generating dangerous byproducts as long as it operates according to its specifications.

CE and UL have also recognized the vast majority of models as meeting stringent safety compliances, and they have been CARB-certified as being ozone-free. Therefore, the only time you should not be using an air purifier is when there is a safety hazard, such as a faulty power cable, an ozone generator that disperses harmful ozone, or filthy filters that will hinder the purifier’s ability to filter the air effectively.

This plan can provide you with all the benefits that an air purifier offers without requiring you to have it on all the time; however, you will want to run it at least once a day for the optimum effect. For example, suppose you cannot leave an air purifier running continuously throughout the day. In that case, you can still get the most out of it by setting it to its highest speed for at least half an hour and up to two hours before entering the room, just until the air quality indicator goes green.

These machines can eliminate anywhere from 95 to 99.97 percent of airborne contaminants. However, because airborne pollutants will continue to circulate without interruption throughout the day, you should turn the air purifier back to a low speed and leave it on continuously in the background to maintain the air in the space.

It is not a problem to leave an air purifier running continuously, even when nobody is in the house.

If you get home after a hard day at work or after being away for an extended period, you will be greeted by clean, purified air maintained in the home. Suppose there is a consistent supply of clean air free from airborne irritants. In that case, you can breathe easily and comfortably without experiencing allergy symptoms such as coughing, sinus pain, red eyes, headaches, and itchiness.

When you turn off an air purifier, it will immediately stop filtering the air, and the cleaning cycle will have to begin again. Within two to four hours, potentially hazardous particles such as pet dander, mildew, yeast, germs, and pathogens will gradually return, resulting in a decline in the air inside the building.

Air pollution has widespread negative impacts on human health, but the risk can be mitigated by ensuring that the air purifier is always operational. Light sleeper or not, the quality of your sleep and your health will improve if you sleep with an air purifier every night.

It prevents respiratory allergens from building up overnight, which is essential because this can cause allergic reactions like a cough at night, choking, and sinus problems.

Because of the loud noise that the fans produce, you should be aware that some machines are not appropriate for use at night.

Invest in a low-decibel air purifier for the bedroom and position it near you, preferably by the nightstand, if you want to sleep through the night without interruption. When an area gets closer to where you breathe, the time it takes for clean air to come to you is reduced.

Can You Run a Fan and Air Purifier Together?

Operating an air purifier and a fan simultaneously without experiencing any adverse effects is possible. Both work together to create an atmosphere that is pleasant to be in a while also being conducive to good health.

A fan will assist in the movement and distribution of the air purifier’s clean air. In addition, the enhanced air circulation will raise filtration efficiency, particularly during the winter when the air is cold and dense or when using a compact air purifier with a restricted airflow delivery rate.

The only necessity you need to know is that the air cleaner is in good working order and always has clean filters. If this does not happen, it will be ineffective since the air purifier will stop functioning while particles remain in the air.

Because ventilation is of such critical significance, you would believe that positioning your purifier in the center of the space would be the most effective course of action.

Because of the way particles move around in a space, positioning your purifier such that it is facing one side of the space is optimal. The area around the air purifier will have cleaner air due to the air purifier’s action of purifying the air.

Because it creates a vacuum, the fan will draw stale air from the opposite side of the space into the space. Therefore, it is not recommended that you position your purifier in the corner of a space since there will not be sufficient clearance for ventilation.

For the purifier to work effectively, there must be sufficient ventilation. Therefore, when selecting where to leave your air purifier, it is best to position it so that it can remove contaminants at the very point where they enter the building.

Your home’s air will suffer directly from particles from the outside air. If your air purifier is close to windows or doors, it will be more effective at removing pollutants from the air before they enter your home.

It is also typical practice to position an air purifier near odor-producing sources such as the kitchen. For example, the smells from preparing meals, slicing onions, and using the trash can in the kitchen are all potential sources of scents that could spread throughout the rest of your home.

What Makes a Home Luxurious

How To Clean Copper Mugs?

Can You Use an Air Purifier and A Fan at...

How Long Do Vacuum Bags Last

What Does Red Light on Honeywell Air Purifier Mean

How Often Should You Clean Your Chimney?