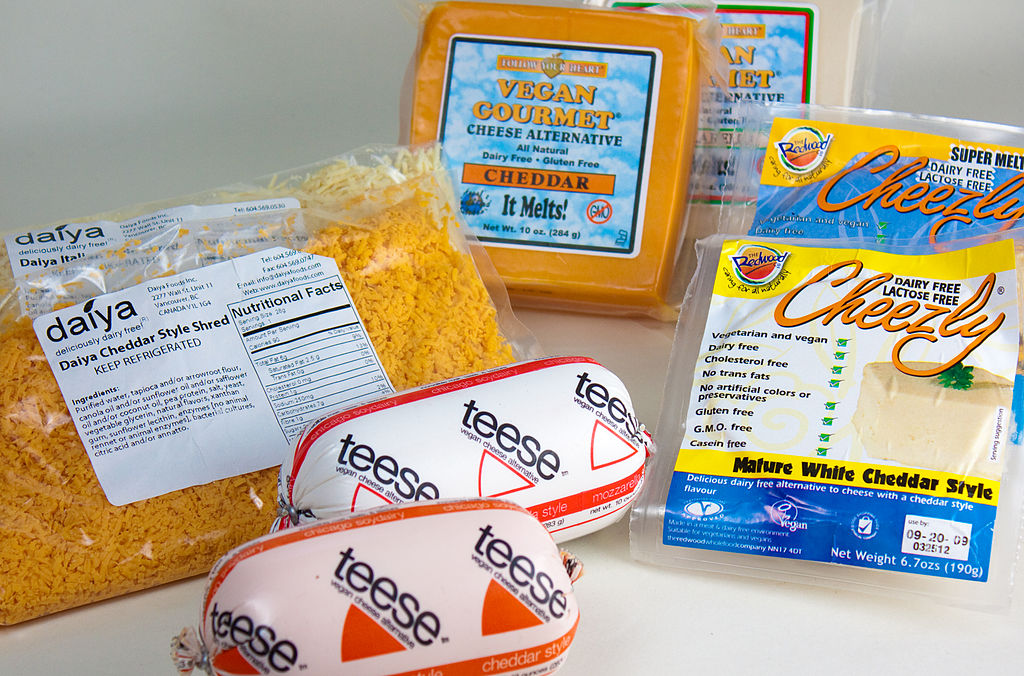 This is in line with the storage considerations for waxed cheese or large cheese wheels (you can find more about how long cheese wheels last here). If you’re on a vegan or plant-based diet yet need cheese, you might not have to give it up. While conventional cheese is manufactured from the milk of cows, goats, or sheep, substitutes made from nuts, nutritional yeast, and vegetable oils are becoming increasingly popular. The cheese was brought into the dairy-free world thanks to food technology, human creativity, and the popularity of vegan diets. Vegan cheeses are manufactured entirely of vegetable proteins and do not contain animal products. Soy, nuts like cashews and macadamias, and vegetable oils like coconut oil are commonly used. Cheeses made from agar, tapioca, peas, and arrowroot are also available.

Some vegan cheeses’ ingredient lists may raise the eyebrows of those aiming to consume clean, less processed foods. For example, added starches and thickeners like carrageenan and xanthan gum are common.

When vegan cheesemakers initially started making vegan cheese, the main goal was to make it appear like traditional cheese. But, as time went on, they knew it wouldn’t be enough. Instead, they needed to develop techniques to make the animal-free cheese taste and behave more like regular dairy cheese. So, for example, you can use vegan cheese brands on toast or even on grilled cheese sandwiches if you want to.

Vegan cheese is made similarly to traditional cheesemaking, except for the use of animal milk. First, bacteria are used to separate plant proteins. Then, to help achieve the ideal cheeselike consistency, substances like oils and thickeners are added. Time is the next significant item needed for great vegan cheese, just like regular cheeses. After that, the bacteria and vegetable protein sit and break down even more. Unlike animal proteins in dairy cheeses, Vegan cheese proteins do not naturally link to one another. As a result, the flavors are less complex and distinctive.

Can Vegan Cheese Have Mold?

Like all types of food, even vegan cheese can grow moldy as it has lower shelf durability.

Vegan cheese from the store can be kept unopened for up to 4 months and opened for a week. On the other hand, Vegan cheese can be controlled in an airtight container for 4-6 days. An infestation of dangerous mold can be easily detected: Foreign mold on cheese resembles other moldy foods. It appears as fuzzy spherical spots that grow only on the surface and are often dark green to black. Tiny downy hairs can be seen if you look closely. Non-dairy cheese, prepared from fermented tofu or whole soy, dates back to the 16th century in China. Later, soy flour, margarine, and yeast extract were used to make vegan cheeses at home. This can result in a hard vegan cheese sliced with tougher margarine and softer, spreadable cheese.

Vegan cheese, in the end, can be a decent substitute for dairy cheese. Vegan cheese is a safe and nutritious option because it contains no carcinogenic animal proteins, growth hormones, or saturated animal fat. However, vegan cheese is characterized as having a putrid and gummy odor. It’s been compared to terrible objects like stale milk, stink, and smelly socks on several well-known chef blogs.

Can You Cut Mold Off Vegan Cheese?

If the mold isn’t too mature, you can probably remove the mold from vegan cheese and not suffer from a bout of stomach aches. Hard and semisoft cheeses are often resistant to mold. Home cooks can chop away the moldy part of the cheese and consume the remainder of it. One inch (2.5 cm) surrounding and below the moldy spot should be cut off.

Refrigerate the vegan cheese for up to 5 days or freeze it in an airtight container for three months. Vegan cheese keeps well in the freezer. Just make sure it’s wrapped in plastic and stored in an airtight container. It will last at least three months in the refrigerator. If you plan on shredding it, we recommend doing so before freezing it to speed up the thawing process.

When you choose vegan cheese, you demonstrate that you will not support this cycle of suffering. Cashews, almonds, and macadamias are the most frequent nuts used to make vegan cheeses. These plant-based sources are high in healthful fats but lack the cholesterol, rennet, and other undesirable elements found in cow’s milk cheese.

Mini pizza bits, lasagna, and tacos all benefit from the addition of melted shredded vegan cheese. The most frequent tastes of shreds are cheddar and mozzarella, but pizza and Mexican mixtures are also available from various manufacturers. On top of homemade pizza, we like to sprinkle some shredded mozzarella.

Vegan cheese wedges and blocks can be cubed, sliced, shredded, and even chopped to fit any need. They’re ideal for making vegan Lunchables or assembling a charcuterie board. Classic cheeses like cheddar, Monterey Jack, and mozzarella are famous, but manufacturers also offer aged, smoked, or exotic ingredients like caramelized onions, reishi mushrooms, and even spicy peppers.

Yes, Daiya cheese can develop molds. The manufacturer states that Daiya cheese should be consumed in a week or less once opened.

First, the good news: you can readily identify if your cheese is rotting using your senses. If you pay attention to vital signals, you won’t be able to eat rotten cheese without noticing it.

An infestation of dangerous mold can be easily detected: Foreign mold on cheese has a similar appearance to other moldy foods. It appears as fuzzy spherical spots that grow only on the surface and are often dark green to black. Tiny downy hairs can be seen if you look closely. Mold reproduces by spores, which can be found all over the cheese, even if only visible on the surface. Because some molds can release potent toxins, removing all the cheese is critical. As a result, keep various types of cheese separate from one another.

The main picture is from Veganbaking.net from USA, CC BY-SA 2.0, via Wikimedia Commons.

How Long Do Thawed Frozen Berries Last in The Fridge?