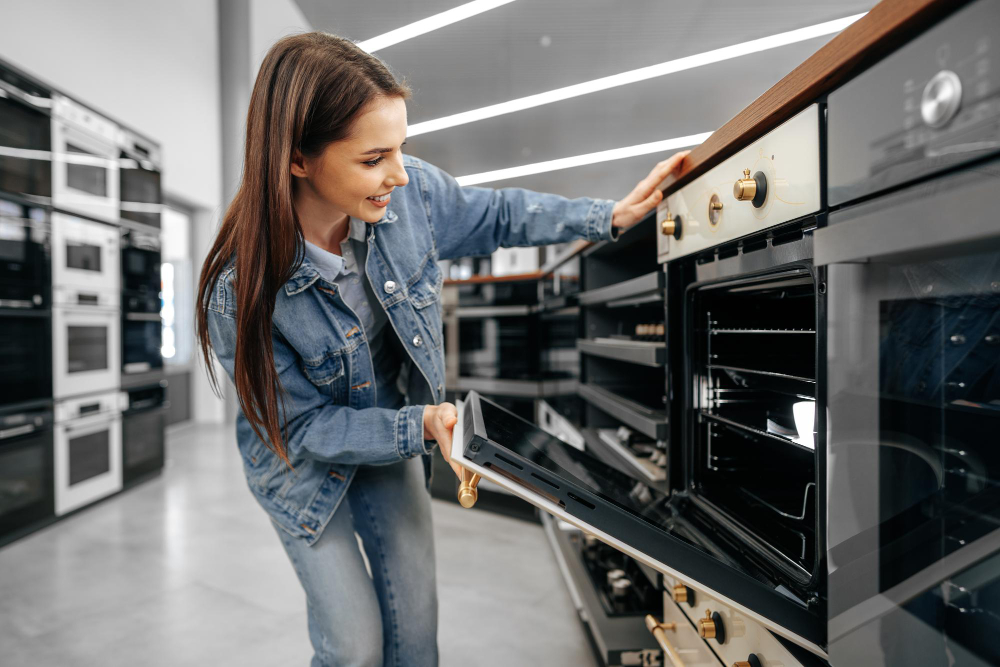 Sure, electric stoves do not eliminate the risks of burns or fires, but they are generally considered safer. If not correctly hooked up to a gas line or a knob turns enough to release gas without igniting, you also risk gas leaks.

Though covered with metal grates, the burners on a gas stove use an adjustable open flame. Wherever there’s an open flame, there’s a chance of a flammable item getting too close and catching fire.

Carbon monoxide detectors should be mounted in every home with a gas stove. Whether you have a gas or electric stove, you should always ensure the knobs are switched off while the equipment is not in use.

Can An Electric Oven Leak Gas?

No, electric ovens do not leak gas because they use electricity exclusively. However, the same cannot be said for gas ranges/ovens.

All gas stoves and ovens produce carbon monoxide; this does not imply a hazard. However, about half of all stoves boost carbon monoxide concentrations above nine parts per million in the kitchen, which the EPA considers the upper limit.

If you notice a strong gas smell from your stove or oven, you’ve most likely got a leak. On the other hand, slow leaks may not produce an odor. Detecting a gas leak on a stove will need you to check for additional indicators. One telltale sign is an orange or yellow flame when cooking on the stove.

Small amounts of carbon monoxide are released into the air while cooking. Smoke inhalation from cooking can be deadly if not correctly handled, as high levels of this gas can induce a reduction in awareness and, finally, death.

The odorless carbon monoxide emitted by gas stoves can build up to hazardous amounts in the home. In addition, cooking food in a gas oven generates carbon monoxide as a byproduct of the combustion process.

If your electric oven smells like gas, the most typical causes can be a damaged heating element or frayed wiring. To identify the source of such gas leak, remove the oven’s back panel and perform a thorough visual inspection.

There is no gas leak in an electric stove. However, the wire or heating element may be the source of the burnt smell. Replace the defective component after it has been thoroughly inspected.

Several fragrances can linger in the air for a lengthy period, including fish and even the odor of burning plastic. Stopping the odors at their source will help you eliminate any unpleasant odors your oven may be producing or causing around your home.

It’s most likely that food cooked in an oven is to blame for the unpleasant fragrances, but even new appliances or the wrong cleaning chemical might produce unpleasant smells.

Before utilizing a new oven, it’s common knowledge that it should be preheated. This is a way to burn in your oven and eliminate any chemicals used to protect the range lining.

This is a workaround if you don’t have a zip tie on hand—the ability to rectify the problem before using the oven for actual cooking benefits this feature.

How Do I Know If My Oven Is Leaking Gas?

A charred heating element or wire is the most common cause of a gas-like stench in an electric oven. First, remove the rear panel of the range, unplug it, and let it sit for 10 minutes before performing a component-by-by-component inspection.

Can You Smell a Gas Leak from Oven?

It’s understandable if you’re concerned about the odor of natural gas. Steps you can do to get rid of ascent from a gas range in your kitchen are outlined below. Here’s how to figure out what’s wrong, diagnose it, and fix it.

Pilot light or gas flame is required to start a gas oven’s ignition system. For the vent to expand, the thermostat must be turned on. Allowing the gas to heat up and initiate activity in the burner is made possible by opening the safety vents.

Before you see a flame on your range, you’ll typically smell something unpleasant for a short time first. It does, however, smell different when there is a gas leak present—almost like rotten eggs in some cases. This fragrance is out of the ordinary.

There is a likelihood of an oven gas leak if the gas pipe is eroded by water spills or stove cleaning. To avoid this problem, homeowners need to clean and maintain their stoves regularly.

Gas can leak out when a stove’s gas hose is improperly installed. As a result, a gas leak may occur, potentially posing a danger. As a result, hiring a professional to install your stove is essential.

Perlite Vs. Vermiculite Pizza Oven: Which One Is Better

Is It Cheaper To Use an Electric Kettle or Gas?

The Truth About Oven Cleaners: Are They Safe and Effective?

Why Are Saucepan Handles Made of Plastic?