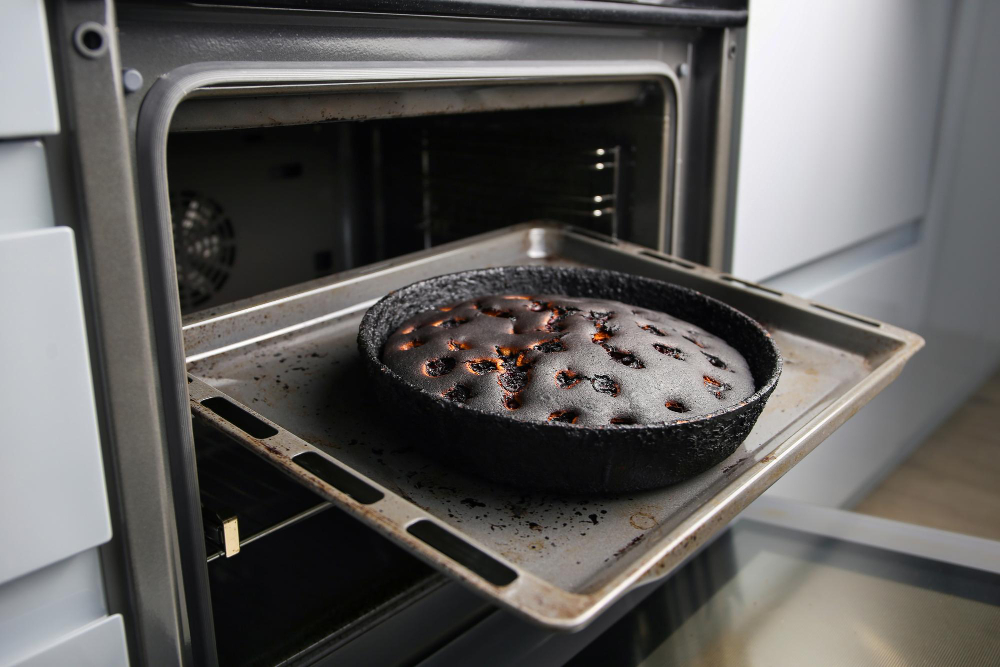 Smoke detectors and carbon monoxide detectors may sound if food is being burned in the home. You may also ask yourself—can an electric oven have a gas leak?

Cleaning cycles of self-cleaning ovens can be interrupted, as well. Because carbon monoxide is poisonous, it’s essential to pay attention when an alarm goes off due to elevated gas levels.

According to research, when the stove is operated without the range hood, the carbon monoxide emissions in the kitchen are higher. In addition, many kitchens have gas stoves that release unvented combustion products into the cooking area.

Some carbon monoxide will be created even if the kitchen range is calibrated correctly. To get rid of cooking aromas, grease, and moisture, range hoods are recommended by most kitchen range manufacturers.

Toxic as carbon monoxide is, it can kill within minutes of inhalation. At levels more than nine parts per million, 51% of kitchen ranges tested did not meet EPA standards. Five percent of the people tested positive for carbon monoxide at or above 200 ppm.

When nitrogen in the air and oxygen in the burner combine, a respiratory irritant called nitrogen dioxide is generated. Unvented gas heaters may be linked to health issues, given the prevalence of gas ranges, the tightening of building codes, and the widespread use of gas ranges for home heating in the United States.

Can You Get Carbon Monoxide Poisoning from Cooking?

The dangers of carbon monoxide poisoning are rarely discussed during the holiday season. However, you and your family may be in trouble for CO poisoning if you spend hours in the kitchen during Thanksgiving preparing. Therefore, precautions must be taken, and attention must be paid while working in a culinary environment.

Turning on a gas stove is an excellent technique to see if the air is contaminated with carbon monoxide. For example, carbon monoxide may be present if it emits orange smoke or if the burners are out of order.

It’s easy to forget to properly ventilate your oven when hosting a social gathering with a whole house of guests. Thanksgiving is a great time to ensure that you’re not heating a deadly amount of carbon monoxide.

Ensure your CO and smoke detectors are working correctly, for starters. An alarm is the best way to identify the gas early because it is colorless and odorless; thus, it typically remains undiscovered until individuals start experiencing dizziness or headaches.

Firefighters say that carbon monoxide poisoning symptoms include headaches, hearing impairment, dizziness, fuzzy vision, weakness and vomiting, confusion, rapid heartbeat, and convulsions if you see any of these signs, dial 911 and leave the building immediately.

If you inhale carbon monoxide, it can harm your blood, lungs, heart, and neurological system per its Material Safety Data Sheet. CO can induce convulsions and death within 30 minutes of exposure, as little as seven percent.

The meat will retain its attractive red color while being stored using this mixture. There won’t be any brown edges on it while on the grocery store shelf.

By incorporating additional gases, the shelf life of this product is extended from the normal five days to as much as 15 days. So why not just use carbon dioxide and nitrogen as a fuel source? A less-than-appetizing result would be if you cooked the beef too long, as it would become gray or purple.

CO-treated meat is safe to eat. Even while breathing in CO is dangerous, once it has been chemically mixed with beef, it is no longer harmful; therefore, there will be very few CO molecules in a bag of ground beef once it has been opened.

Is Smoke From Burnt Food Harmful?

You’re more likely to inhale smoke when trapped in an enclosed area near a fire, like a kitchen or a home. Most home fires are caused by cooking, fireplaces and space heaters, electrical failures, and smoking, which are all common causes.

Immediately contact 911 if you or someone you know has been in a fire and has smoke inhalation symptoms such as difficulty breathing, singed nose hair, or burns.

Smoke can deplete oxygen in two ways. First, when you’re close to a fire, the combustion process depletes the oxygen supply, making it difficult to breathe. Smoke also contains harmful chemicals, such as carbon dioxide, which further decreases the amount of oxygen in the atmosphere.

Compounds emitted during a fire can harm your cells by interfering with oxygen transport or use in the body. Inhalation of one of these compounds, such as carbon monoxide, is one of the primary causes of death from smoke ingestion.

Your skin and mucous membranes might be damaged by substances that develop during combustion. In addition, swelling and collapse of the airways can occur due to exposure to certain substances. To name a few, irritants found in cigarette smoke include ammonia, sulfur dioxide, and chloramine chloride.

Do Ovens Have Carbon Monoxide?

All gas stoves and ovens produce carbon monoxide; this does not imply a hazard. However, about half of all stoves boost carbon monoxide concentrations above nine parts per million in the kitchen, which the EPA considers the upper limit.

Small amounts of carbon monoxide can be discharged into the air while cooking. However, smoke inhalation from cooking can be deadly if not correctly handled, as high levels of this gas can induce a reduction in awareness and, finally, death.

The odorless carbon monoxide emitted by gas stoves can build up to hazardous amounts in the home. In addition, cooking food in a gas oven generates carbon monoxide as a byproduct of the combustion process.

Can I Microwave a Chinese Food Container?

How Long To Defrost a Turkey in the Fridge?