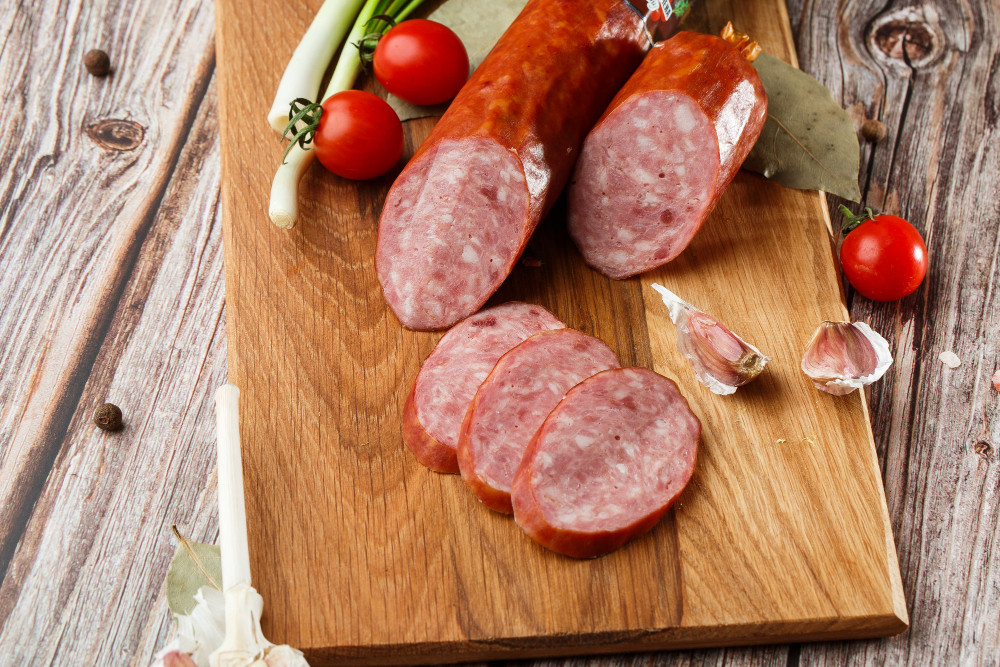 Deciding to use cheese in your summer sausage is simple. However, it is possible that selecting the type of cheese (such as high-temperature cheese) will prove to be a more challenging selection.

All can have a rewarding experience while making your summer sausage from scratch. You can select the sort of meat and seasonings that suit your preferences. Unfortunately, the only way to make summer sausage taste better is to mix some cheese.

Commercial sausage manufacturers frequently combine a range of cheeses with various meats and seasonings to create diverse flavors in their summer sausages. However, a more convenient choice is often sticking to tougher cheeses with lower fat content because the cheese won’t melt as quickly in this situation.

Many distinct forms of sausage arose over time, employing various combinations of meat and spices and significantly superior cuts of meat. Still, not all of them were actually “kept in salt.” Instead, they had to be cooked immediately, just like any other meat, or it would be a dangerous idea to consume them.

Sausage producers created a delicious sausage that could be stored without refrigeration for extended periods, even in the summer. This was accomplished by utilizing all three preservation methods: lactic acid fermentation, cure, and smoking. In addition, they’d prepared some summer sausage earlier in the day.

What Kind of Cheese Do You Put in Summer Sausage?

It’s entirely up to you if you’re a fan of summer sausage. Choosing cheeses with a lower fat content and more rigid texture is better because they don’t melt as quickly.

Cheddar cheese conjures images of its distinctive color and flavor, which work well with various foods. Three to six months old is considered ripe for sharp cheddar cheese. Therefore, this is one of the better options for creating summer sausages.

Semi-hard Provolone cheese from Italy comes in a variety of shapes and sizes. It has a pleasant taste with salty undertones and nutty overtones. It’s a great combination, especially if you’re preparing it with pork.

Goat and sheep milk is used to make this semi-hard cheese from Cyprus. The melting point of Halloumi makes it an excellent grilled cheese and an excellent alternative for producing your summer sausage. You may want to fork out more money for this cheese to get the best flavor, even though it’s not the cheapest.

Pepper Jack is a hot American cheese descendant of Monterey Jack. With a distinct flavor, it’s a semi-soft version. Pepper Jack is a beautiful choice for making spicy summer sausages.

This is one spicy cheese infused with habanero chilis, garlic, rosemary, and sweet peppers for an extra kick. However, when you’re about to be overwhelmed by the flavor, a buttery aftertaste appears.

What Is a Good High Temp Cheese?

A high-temperature cheese is a cheese that has a melting point so high that it doesn’t melt at cooking temperature. Therefore, they never lose their shape or liquefy when cooked in any above ways.

What Is High Temp Cheese for Sausage?

High-temperature cheeses (also known as high-temp cheeses) can endure high temperatures in the kitchen and maintain their shape. The creamy flavor and delicate texture make them an ideal accompaniment to meats.

The milk is heated to a higher temperature before curdling to produce high-temperature cheese. Cheese that can be stretched or pulled into strings can be made with this method.

After the curdling process has occurred, the milk is allowed to cool before being processed into cheese. When preparing sausages or other meats from scratch, high-temperature cheese is ideal since it doesn’t lose shape when smoked or grilled. Of course, there will be no melty mess, but you’ll still get all the beautiful advantages of cheese.

Like those from the Alps, soft, high-moisture cheeses melt the best, as do cheeses made at high altitudes. Cheddars, gouda, brie, and gruyere are the greatest cheeses to melt. High-temp cheeses like mozzarella, swiss, and cheddar are your best bet if you’re searching for something that won’t melt as quickly. The cheeses pepper jack, habanero, and bleu high-temp can all be used to provide some more zing.

Can You Use Regular Cheddar Cheese in Summer Sausage?

How much cheese do you need to use to make summer sausage, and how much do you have? Unlike certain other ingredients, such as curing salt, you can experiment with the amount of cheese you use, which requires precise measurements.

It’s all you need to do if you’ve purchased pre-packaged high-temperature cheese. First, ensure that the meat is ground before cooking. Make little cubes of cheese first if the cheese is not cut.

The problem with high-temperature cheese is that it might be prohibitively expensive or difficult to obtain. So if you’re searching for a quick and easy way to make sausages, you may want to explore elsewhere.

Consider that you have a low melting point cheese at home and are unclear whether you should use it in your summer sausage. Many people refer to low-temperature cheeses as “normal cheeses.”

Summer sausage is not the best match for regular cheeses with high moisture levels, but many individuals have found success with this approach. Swiss cheese, Cheshire cheese, and mozzarella all fall within this category. However, some cheeses, such as brie, are too soft to be used in summer sausage; thus, they should be avoided.

Why Can I Eat Yogurt and Cheese but Not Drink Milk

Can I Microwave a Chinese Food Container?

Why Does Baking Sheet/Pan Warp in Oven?