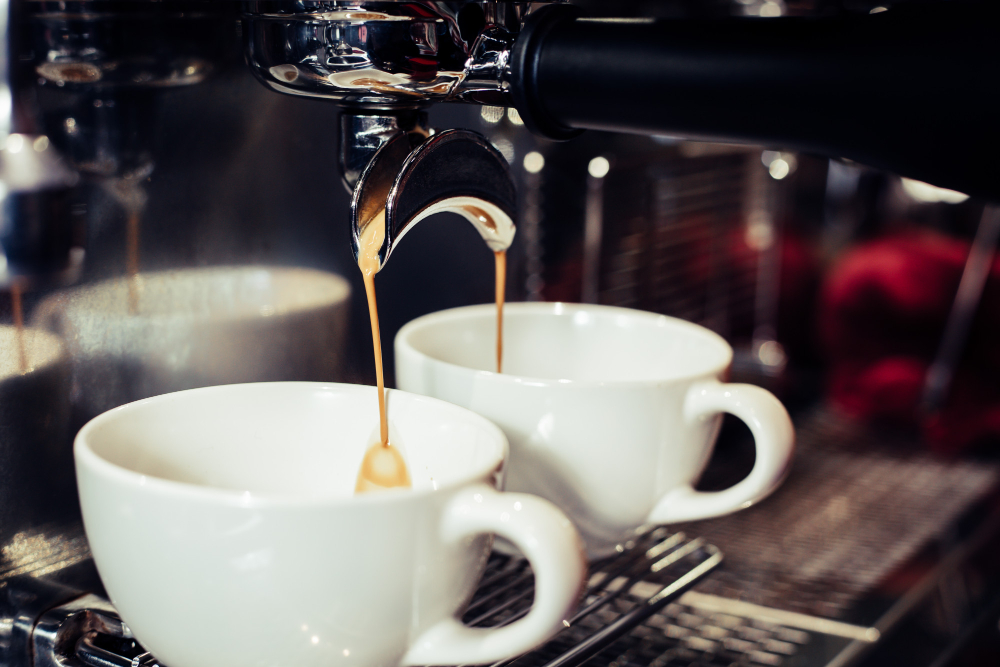 Coffee first arrived in Europe during the early 17th century. After some decades, consumption escalated and eventually followed colonial ships to the United States later in the 1600s. However, coffee did not become widely popular in the United States until the Boston Tea Party, a revolt against the British government’s imposition of a tea tax on its American colonies.

Up to the 19th century, the coffee house developed fast across Europe and established itself as a meeting place for intellectuals. Angelo Moriondo patented the first known forerunner to the espresso machine in Turin in 1884, but it wasn’t until 1901 that Luigi Bezzera created the first “real” espresso machine.

Across the early 1900s, companies such as Folgers and Maxwell House commercialized and popularized coffee. Then in 1909, US inventor George Washington invented a method to manufacture and mass-produce instant coffee. However, coffee only got more popular after Prohibition in the 1920s.

What Is the Difference Between American Coffee and European Coffee?

Of course, cultural distinctions between the United States and Europe contribute to these disparities in partnerships. One of the most noticeable contrasts is a strong emphasis on ease of accessibility in American culture.

Filter coffee allows coffee shops in the United States to provide clients with the quality flavor and tasting notes they prefer while still providing convenience and speed. Instant coffee has been a way of living in the United States for decades. While specialty coffee replaces those old traditions, filter coffee is more accessible for a speedy existence.

Coffee culture differs in Europe. While espresso is more prevalent in Europe and is commonly associated with social gatherings in coffee shops or café bars, this isn’t always the case.

And, while European urban culture does share this drive for convenience on occasion, there is a distinction. Cafés and restaurants in nations such as France and Italy frequently emphasize delivering an experience, encouraging clients to sit down and relax.

What Is the Difference Between Italian Coffee and American Coffee?

Italians, for example, only consume cappuccinos and lattes before 10 a.m. because they believe that drinking milk after that time will upset their digestive system at the end of the day. Americans have a different perspective on this. Americans consume coffee at all hours of the day and night, blended with sugar, milk, various tastes, and even hot and cold.

Another distinction between American and Italian coffee is the method of preparation. For example, drip and instant coffee are deemed American, whereas espresso is considered Italian.

Drip coffee and espresso appear to be very similar. Still, there are several significant distinctions between the two, including the granularity of the ground coffee bean and the preparation method. As a result, these two coffee drinks appear to be highly similar at first appearance but are quite different.

While the setup appears to be the same, water and coffee have entirely different flavors. Not that all coffee beans can be used to make espresso, although they can all be ground to make drip coffee. As a result, the flavors of these two drinks, one American and one Italian in origin differ significantly.

Why Does Coffee Taste Better in Europe?

Coffee is among the few drinks that connect us all over the world. Of course, each continent has its unique flair, but no place has a long history of coffee than Europe.

Italians invented espresso, and Italy is primarily considered the world’s coffee capital. So you can’t talk about European blends without mentioning Italy. In Italy, however, there is a strict coffee custom that every local adheres to.

Cappuccinos and other dairy beverages are not permitted after breakfast. Instead, coffee is frequently served with a glass of water to refresh the palate in between. The entire process is fast; many Italian residents exchange a few words with the bartender and quickly dip.

When it comes to coffee, Italy doesn’t mess around. But, of course, this applies to all food in Italy, as most Italians have high regard for what they eat. All of this may sound not very comforting, but it’s a testimonial to the excellent quality of Italian food, particularly their coffee.

It’s a typical cafe through and through, but it serves less-touristy coffee mixes. As a result, it’s ideal for breaking from your coffee rut.

What Is European Style Coffee?

European espresso is a bottomless, bittersweet brew with plenty of crema, powerful and distinct flavor profiles, and a long aftertaste. Espresso made in Europe and Italy will often taste as lovely as ground coffee smells.

Although roasting processes vary amongst Northern and Southern Italian espresso roasters, these artists have broad agreement on what defines a superb espresso mix. Most European espresso blends are gently roasted, employ low-acid coffee beans, and contain a modest quantity of high-quality Robusta coffee.

European coffee encompasses a broad spectrum of styles, from the famous Italian espresso to drunken Irish coffee and everything in between. Making it at home necessitates the purchase of an espresso machine and a coffee grinder, but if a hit of powerfully rich caffeine in the morning is your notion of heaven, it’s well worth the cost.