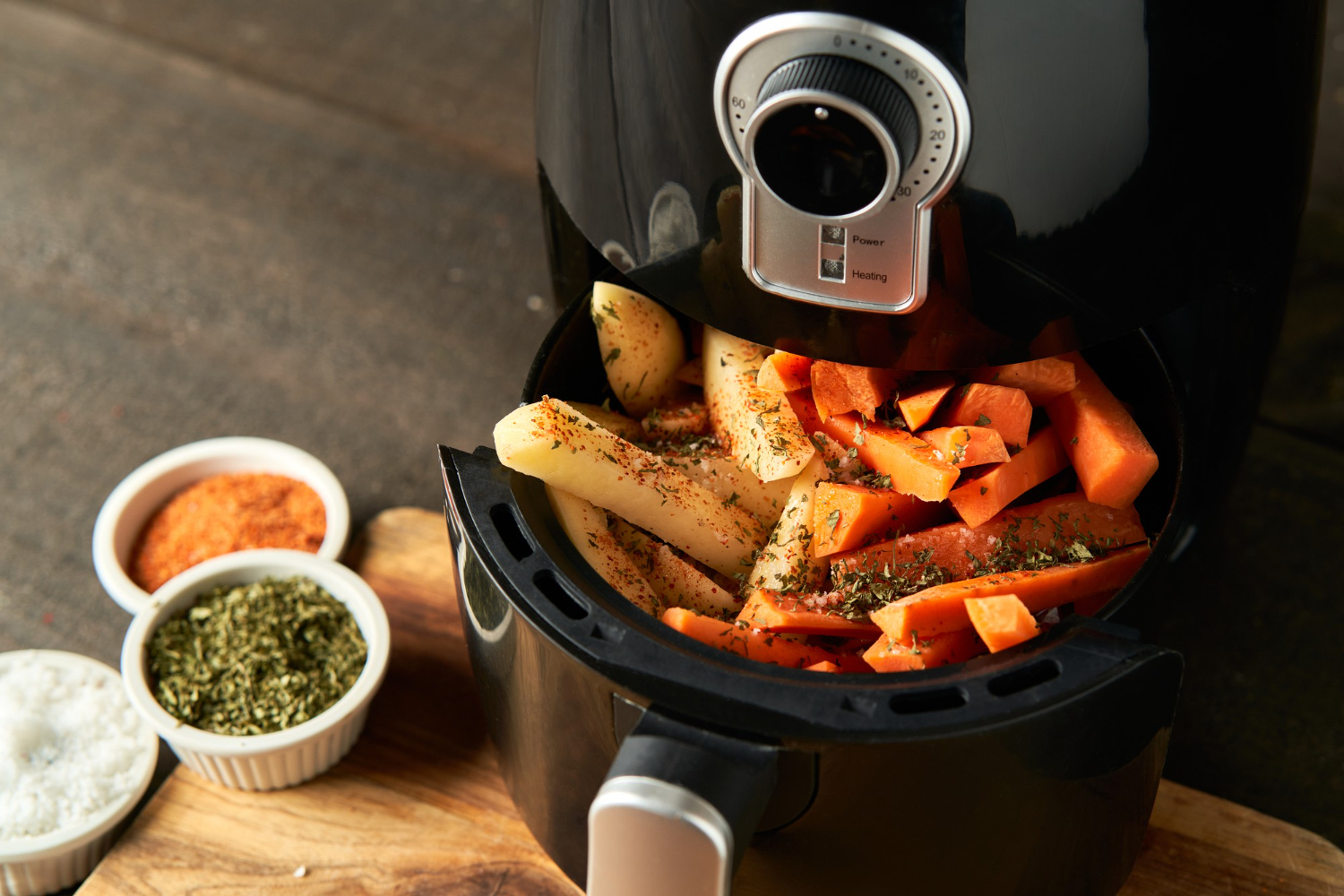 The air fryers’ current growth in popularity is related to increased health consciousness and a growing desire for fried foods. On the whole, air frying is healthier than deep-frying. It reduces calorie intake by 70 to 80 percent and has significantly less fat.

An air fryer is like a toaster oven; they sit on your countertop and are shaped like an egg or square. The basket slides out of the cooker to hold your diced potatoes, chicken nuggets, and zucchini slices. In addition, you can cover it lightly with oil before cooking.

Dishes cooked in circulating air form a crispy brown exterior and remain soft within, just like deep-fried foods. The container below the basket is always prepared in advance to capture any grease released when the food cooks.

Advertising this appliance to eat fried dishes without the ill effects of oil-fried foods enables manufacturers to sell many air fryers. Air-fried foods have a lesser fat content than deep-fried foods, and they may be healthier because of it.

Although there are several issues regarding toxicity and cancer, others doubt the supposed benefits of air-fried foods.

According to a study, using an air fryer results in a 90% reduction in acrylamide levels. Because of the particular way of cooking, this may help reduce additional severe side effects from oil frying. When potatoes or other starchy foods are fried, a chemical called acrylamide is produced—a recent study linked to an increased risk of cancer.

Air frying is not always the healthiest cooking option, but some aspects of it may benefit you. For example, a chemical called “cholesterol oxidation products” rose as fish was fried in the air (COPs). This causes the cholesterol in meat or fish to break down, resulting in COPs being formed. In addition, studies have shown that trans fats, saturated fats, and cholesterol contribute to cardiovascular disease, arteriosclerosis, cancer, and other illnesses.

Adding fresh parsley, chives, or a blend of the two is one technique to minimize the number of COPs when you air fry fish. Research reveals that these herbs help reduce air-fried food’s COPs.

It appears to limit the omega-3 fatty acids in fish that are extracted through the use of air frying. Omega-3 fatty acids found in fish and vegetable oils may help lower blood pressure and raise “good” HDL cholesterol levels known to protect the heart.

Is Air Frying Healthier Than Oven?

Cooking with an air fryer as an alternative to a convection oven is not healthy by itself. It’s not a magical cure for cholesterol because other factors affect the quality of the finished product after cooking.

Still, when you strive to cut down on calories, it has the advantage to use an air freezer—specifically that the design prevents food from sitting in and absorbing excess oil. In other words, the frozen foods cooked in an air fryer would be healthier than the deep-fried type, which was stuck in oil to achieve that good texture.

That said, the air fryer vs. oven issue is a moot point when it comes to health concerns: If you usually do not use oil to heat up the frozen foods (such as fries, chicken nuggets, mozzarella sticks, etc.) in the oven, all of the air fryers really provides you with a crispier snook, and you spark the hassle of having to turn it halfway through the time of cooking.

Air frying systems are a relatively new device that is meant as an alternative to conventional deep frying. While air frying machines can provide healthier food than deep frying machines, restricting fried food intake can significantly enhance health. The simple replacement of all deep-fried items with fried foods does not provide a healthy diet in any manner. Instead, people should focus on a diet loaded with greens, fruit, complete grains, and lean protein for best health.

But despite these benefits, it is crucial to remember that the sort of food you eat may produce a significant change depending on how it is prepared.

There are several ways that fried air can change the nutritional value of foods and can affect your risk of cancer. First, air frying utilizes less oil, which saves the need for reheating oil. Second, this reduces the modification of acrylamide levels or chemicals designated as carcinogens of group 2A.

Who Makes the Best Air Fryer: Top 3 Brands and Models

Can Pasta Cause Constipation