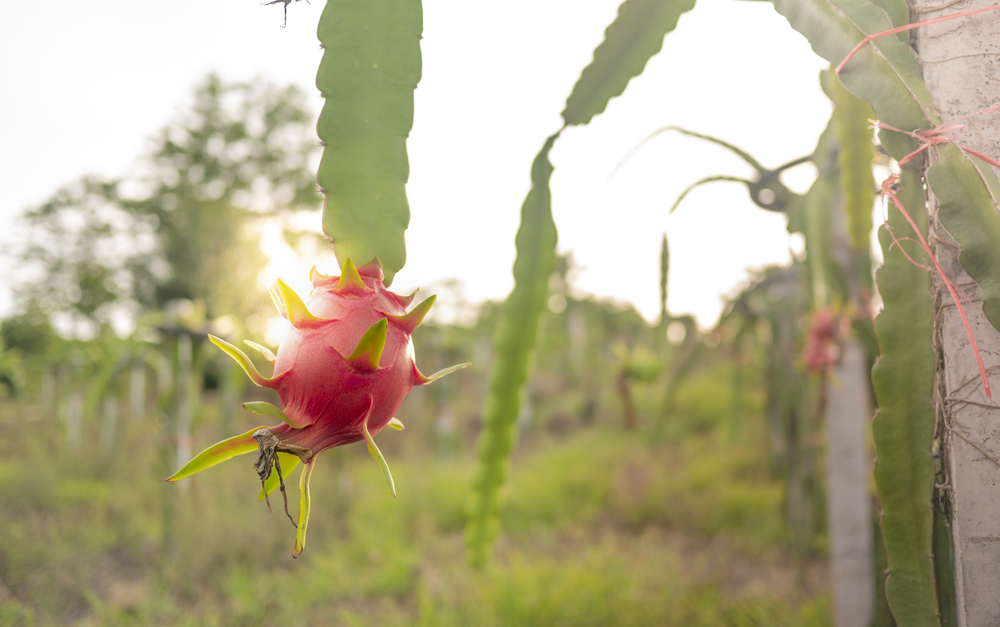 Do They Have Dragon Fruit In Hawaii

Aside from its delicious taste, the dragon fruit is also visually striking due to its vivid hues and dramatic shape. Thankfully, they are now cultivated across the Hawaiian islands and can be purchased locally at their appropriate seasons.

There are a few different types of dragon fruit grown in Hawaii, but the most common ones have either pink or red skin and white or yellow meat on the inside. The more crimson the fruit, the sweeter it is said to taste, while the yellow-skinned, white-fleshed kind is said to be the best of all.

Strawberry pear, night-blooming cereus, pitahaya, pitaya, and more are some of the names for gorgeous fruit in the cactus family. However, in recent years, the popularity of dragon fruit has increased due to its attractiveness and deliciousness.

Juicy, creamy, and refreshing dragon fruit has a flavor likened to kiwi and pear. With its subtle flavor, Dragon fruit complements similarly subtle flavors like lychee and rose and contrasts nicely with bold, acidic berries like pineapple.

Little black seeds are edible throughout the meat, much like kiwis. Cut in half and eaten right out of the shell is the most frequent way to enjoy this fruit, but it also works wonderfully when added to fruit salads, preserves, juices, purees, or freeze-dried fruits.

These days, Vietnam, Thailand, and southern China are the primary commercial producers of dragon fruit. However, cultivation is on the rise, with dragon fruit already being cultivated in Micronesia, Israel, the Philippines, and even Hawaii (which has an excellent climate for dragon fruit cultivation).

What Is Dragon Fruit Called In Hawaii?

In Hawaii, the dragon fruit is named pãpipi pua or pãniniokapunahou. Pitaya is a climbing cactus with trapezoidal, succulent, jointed green stems that lives for many years in an epiphytic environment.

Depending on the species, there may be anywhere from one to three small spines in each depression of the scalloped wings. Hylocereus undatus and its close relatives, Hylocereus polyrhizus and H. costaricensis produce a wide variety of airborne fruit. Southeast Asians eat both fruit and blossoms.

Pitaya typically blooms and bears fruit during the summer months (June to October). In a typical situation, the stem edges may sprout between three and five round buttons, of which two or three may eventually develop into flower buds after around 13 days. Once anthesis has occurred, after 16 or 17 days, the light green, cylindrical flower buds will have grown to a length of around 11 inches.

Moths pollinate the pitaya plant at night, and its roots sprout from the bottom of its stems, allowing it to use these as an anchor when it climbs up rocks, walls, or trees. Night-blooming blooms are yellowish-green and are about 1 foot in length and 9 inches in width. They are bell-shaped and have a strong fragrance.

H. undatus is well-known as an ornamental in Hawaii, especially in a long hedgerow at Punahou School in Honolulu, and sometimes bears a few small, red fruits. In addition, many new, self-fertile, and fruitful pitaya types result from recent breeding and selection efforts in Taiwan and Vietnam.

Where Is Dragon Fruit Grown In Hawaii?

Legend has it that the red-on-the-outside, white-on-the-inside dragon fruit cultivated on Hawaii’s Big Island descends from the famous night-blooming cereus hedge along Wilder Avenue in front of Punahou School. Mrs. Sybil Bingham planted the hedge in 1836, and since then, islanders and tourists alike have stopped by in the evenings from July through October to admire the beautiful blossoms.

The dragon fruit’s huge, sweetly scented white blooms only open up at night, usually between June and October. After the flower withers, the fruit begins to develop at the flower’s base on the cactus’s long, slender “arms” and is ready to harvest after about 5 or 6 weeks.

When the green spikes on the berry are not so green, and there is a little softness to the fruit, it is ripe 30 to 50 days after pollination. The fruit tastes best when given a day or two to soften after picking.

The Dragon Fruit plant can climb walls and trees in its native habitat, but it typically grows up sturdy cement poles in farms. The plant’s broad stems develop roots at their surfaces, allowing them to anchor themselves firmly to the pillar.

When the plant reaches the top of the post, its branches will dangle over the edge, giving it an umbrella appearance. Pruning the top of the post’s young growth can promote the development of more “umbrella spokes,” or the terminal ends of the branches from which the fruit eventually develops.

What Season Is Dragon Fruit In Hawaii?

June through September are the most incredible times to purchase fresh dragon fruit. The best months for harvesting some cultivars are August and September, while others will produce fruit in the winter (November through February).

These days, the gorgeous fruits of the cactus plant are sent all over the world to be grown in subtropical regions. The little, black, crunchy seeds of this fruit are often used as a metaphor for the kiwifruit’s distinctive feel.

Dragon fruit is refreshing and moderately sweet, but some have regarded its flavor as dull. It can be eaten fresh or used in various other ways, including in salads, smoothies, sorbets, and desserts.

It doesn’t matter what kind of tree or bush you plant; this fruit won’t ripen from its green color until it’s well past its prime. Some sources say the yellow type is the sweetest, while others insist the darker pink flesh has the most amazing flavor.

The mature fruit weighs between 150 and 600 grams and is roughly the size and shape of a typical orange. However, the dragon fruit is a slow grower, often needing several years to mature. So, be patient if you want to cultivate your dragon fruit.

This fruit thrives in warm, humid climates like those preferred by cacti and requires just occasional watering. As a subtropical plant, dragon fruit requires roughly six hours of sunlight daily. Also, it does well in a sunny outdoor location or a warm indoor one.