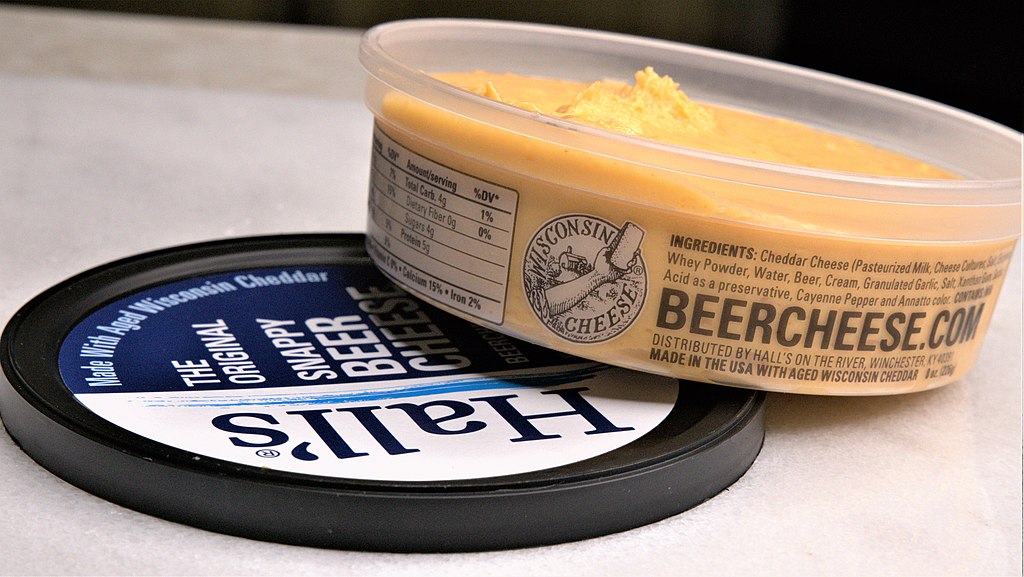 If you’re asking if port wine cheese gets you drunk, you might also ask the same question with beer cheese. Beer cheese is created by blending cheeses, spices, and seasonings with flattened beer to create a spreadable cheese dip or spread.

Cold pack cheese, such as beer cheese, is also known as crock cheese or club cheese. Mustard powder, cayenne pepper, and garlic powder are common ingredients in a cheese blend or processed cheese.

The mixture’s name refers to the flattened beer, infusing taste and a silky texture. In most cases, it’s orange because of the color of the original cheeses or because of annatto coloring, which gives orange cheeses their distinctive tint.

It is a spreadable cheese made with beer and spices that may be used in a wide range of foods. Pretzels and saltine crackers are among the most popular snacks. In Kentucky, where it’s popular as a snack, it’s generally eaten with crackers.

However, once you’ve mastered the fundamentals, the options are nearly limitless. Recipes for beer cheese may add cayenne pepper, Worcestershire sauce or mustard, horseradish, or bacon. Of course, the cheddar cheese isn’t the only cheese that makes its way into the mix.

Will Beer Cheese Get You Drunk?

As soon as a sauce is boiled and then taken off the heat, it usually retains about 85 percent of its alcohol content. Simmering for two and a half hours tends to have the lowest level of alcohol, but it retains about 5 percent.

Beer is a common ingredient in various dishes, from steamed mussels and bratwursts to marinades for grilled chicken and steak. However, if you heat it to boiling, the minimal amount used in these meals should be safe for your youngster to eat.

Wine reduction sauces are better than quick flambes because they burn off all of the alcohol, whereas quick flambes may not. The key is heat and time. Of course, uncooked foods containing alcohol will retain most of their alcoholic content.

However, most of the alcohol in the beer cheese evaporates during baking and is released into the air. This is essentially what happens to a large portion of the water in the dough. On the other hand, Bread has long been known to contain up to 1.9 percent residual alcohol.

You’ll need sharp cheddar cheese, beer, garlic, and pepper, ideally cayenne. You may also use processed cheese that has cheddar flavoring. In a nutshell, beer cheese can be made in 10 to 15 minutes, and it’s virtually always tasty.

Is There Any Alcohol in Beer Cheese?

More than 85 percent of alcohol can be retained in cheese sauces like beer cheese or bourbon caramel heated to boiling point and then removed from heat. It is traditionally served cold and comprises solid cheddar cheese, lager, garlic, and cayenne.

During the late 1930s, near Winchester, Kentucky, a legend has it that it all began on the banks of the Kentucky River. As a complimentary snack to whet the beer appetites of his guests at the Driftwood Inn, Chef Joe Allman invented the unusual salt and spice spread for his cousin Johnnie, the Driftwood Inn’s owner.

If you add alcohol to a hot food after it’s been cooked, it will remain in the dish when you serve it. Likewise, food cooked with liqueurs or spirits should not be given to your infant. This is since these beverages have a higher volume of alcohol than wine, cider, or beer.

It contains alcohol, but you won’t become intoxicated from it. To cook off the alcohol yet retain the flavor, most cooks/chefs will add the beer and then heat the dip. If they don’t heat the beer off, it won’t even give you a beer-high, but it will flavor you.

Can You Get Drunk from Beer Cheese Dip?

If you’re offering this beer cheese to children, you may wonder if you should be concerned. Since most of the alcohol is lost in the cooking process, there is very little alcohol left.

More than 85% of alcohol can be retained in cheese sauces like beer cheese or bourbon caramel heated to boiling point and then removed from heat. So the alcohol content of Diane’s cherry jubilee and other flambeed recipes may still be 75 percent.

Drinking “beer, cider, and perry” with food is legal in California for those under 18. However, the youngster must eat in a separate area designated for food preparation and consumption while at the table.

Alcohol can be paired with a meal for an adult 17-year-old (over 18). However, carafes of wine can only be purchased by adults, whereas a glass of wine with an entrée is allowed for anybody 16 and older. They can’t make an order or pay for the drink.

There is a natural affinity between beer and cheese due to the beer’s rich flavor and energizing carbonation. Adding a touch of carbonation can help cut through the cheese’s dense, fatty texture. It goes well with heavier and riper cheeses, which tend to be a little sweeter.

Only 4% to 95% of the alcohol had remained when it was said and done. However, it’s not uncommon for the alcohol concentration to persist at roughly 85 percent in boiled and cooled sauces, such as beer cheese sauces, whiskey caramels, etc.

The main picture is from Bluegrassfoodie, CC BY-SA 4.0, via Wikimedia Commons.

Can String Cheese Get Warm