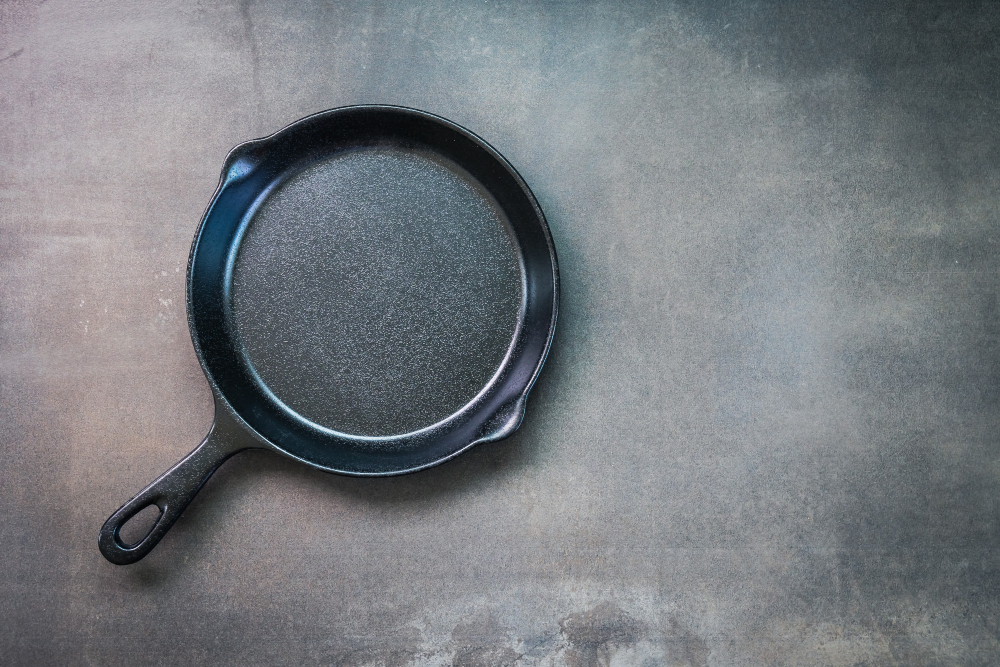 While your cast-iron skillet is durable, it is not invincible. There are a few surefire ways to damage the seasoning or, worse, destroy your cookware.

For a good reason, the cast-iron skillet is the workhorse of many a dedicated home cook. Constructed of one seamless piece of metal, it’s incredibly indestructible, conducts heat exceptionally effectively, and has a nonstick surface that even cooked eggs will slip right off when adequately seasoned.

Because cast-iron cookware conducts heat so well, it can get hotter than other types of cookware. Sticking your cookware into a raging fire may appear to be a quick way to heat it, but overheating can damage your cookware to take a permanent warp or even warp.

Thermal shock is the fatal enemy of cast iron pans: when a pan is heated, the metal expands slightly, a process known as thermal expansion. If you repeatedly blast a cold pan with high heat or immerse a hot pan in cold water after taking it out of the oven, you force the process to go far faster than nature intended, with disastrous results.

It’s best to begin with a lower heat setting to complement the cast iron skillet’s level of thermal efficiency. Remember that cast iron pans will heat up much more slowly than anodized aluminum and other metals, and therein lies their strength – they heat up slowly but are also capable of accumulating more heat for a prolonged period compared to other pans.

Can You Overheat a Cast Iron Pan?

Overheating your cast iron will result in irreversible bumps, dents, and warps. A slightly warped pan can still be used on a gas stove burner or in the oven, but its collectible value is significantly reduced.

Cast iron pans have a status of being high-maintenance, and many pan owners live in terror of breaking or damaging their precious kitchen artifacts. Cast iron pans, in contrast, are practically unbreakable.

While the ravages of time and neglect, in the form of carbon and rust, can be easily wiped off cast iron, it is in many respects fragile and must be handled with care and respect. Cast iron is strong but brittle, like glass; it will break before it bends.

Warping can be a pain. For example, an empty pan put and left on a high-heat burner for a short time might cause warping. With nothing in the pan to absorb and distribute heat, metal in one region at the bottom of the pan expands faster than the surrounding area; what was once smooth and flat becomes irrevocably concave or convex.

Similar damage can be caused by rapid cooling, such as putting a hot pan into a sink full of water. When using a warped pan, the outcome is uneven cooking because liquids and cooking fats now pool in the center of the warp or are dispersed to the pan’s edges away from it, depending on the orientation.

What Temp Is Too Hot for Cast Iron?

If you’re a newcomer to cast iron cooking and utilizing nonstick or stainless-steel pans, you might be confused about how your cast iron should look and feel. An accurately seasoned cast iron pan should be deep black in color, glossy, and smooth to the touch. In addition, coal, wood, gas, and oil are all appropriate sources for cast iron cooking in the current era. On that basis alone, we can reasonably conclude that you could cook using cast iron cookware at extremely high temperatures.

While you are free to throw caution to the wind while cooking with cast iron cookware, it is recommended that you only cook at medium to moderate temperatures when using cast iron. The fact that cast iron cookware holds heat so efficiently is an important issue here.

If you are going to cook with your cast iron at any temperature, it is not a good idea to dry. It would help if you always intended to keep fat, oil, or liquid source covering the whole surface of your cast iron cookware, especially when preheating it.

Can Cast Iron Be Damaged by Heat?

Your cast iron can tolerate a significant amount of heat—but can be damaged if excessively heated. If you overheated the pan by accident, reduce the heat and allow it to cool to the proper temperature before adding your ingredients and continuing.

A cast-iron skillet is one of the most important kitchen items to have. The grill-like nature of cast iron makes it ideal for crisping bacon, frying handmade burgers, and searing steaks that can compete with any grill.

One of the best features of cast iron is its ability to retain heat, ideal for grilling meats and slow, low cooking. However, although it has heat for an extended period, the material takes longer to heat up than other pans.

A cast-iron skillet can endure temperatures of up to 815°C (1500°F), which is far hotter than your oven. However, the seasoning will only burn out at around 427°C (800°F), so don’t be concerned about damaging your pan by cooking over high heat.

On the other hand, cast iron can quickly become too hot for the dish you’re attempting to prepare. Begin with a lower heat setting than you’re used to increase as you gradually get to know your pan. Keep an eye out for warning indications of severe heat, such as smoke.

Can You Ruin a Cast Iron Skillet by Burning?

Overheating your cast iron pan might result in the natural patina of your cookware being burned. In addition, while it can be re-seasoned, it may temporarily harm your pan’s nonstick characteristics.

Cast iron is an exceptionally durable type of cookware. It is conceivable to damage it, but it would require a lot of carelessness over a long time.

As long as you wash down your skillet correctly, it should only accumulate surface rust that can be readily filled off. Unseasoned cast iron has a rugged appearance and feels until satisfactorily seasoned.

Although losing the seasoning is inconvenient, the cookware is still completely functional. You can re-season your pan, but it will take a while and work.

Can a Baking Pan Be Used on the Stove

Stating that “cast iron conducts heat well” is just plain wrong, the strength in cast iron is that it conducts heat slowly, which means it heats more slowly but retains the heat longer.

Thank you for your information, just modified the content with your suggestion.