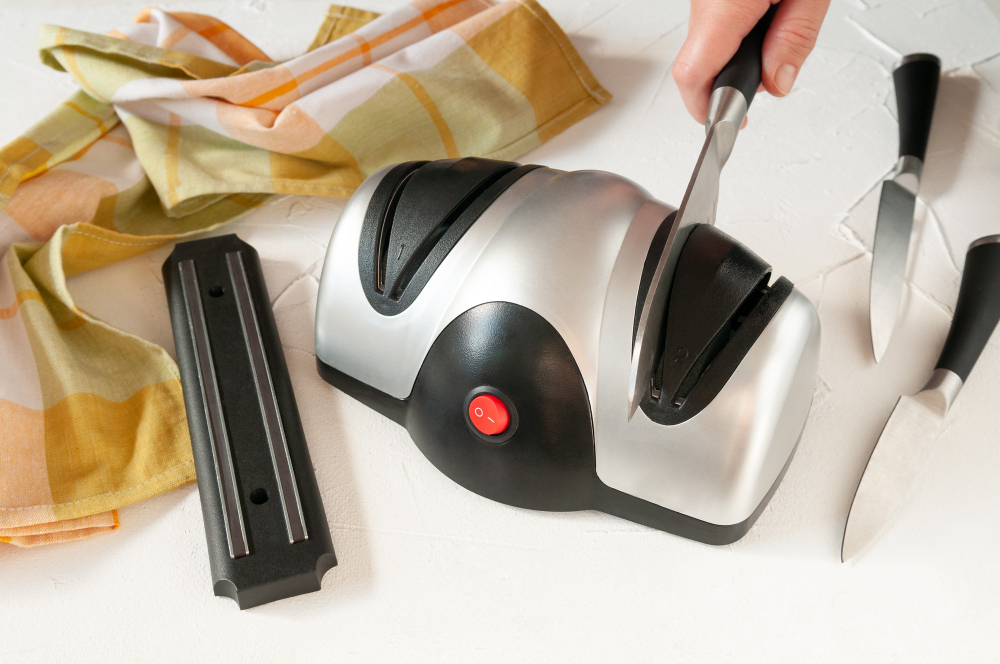 In a nutshell, electric knife sharpeners do not pose any direct harm to knives. Like manual whetstones, they need to be used properly so you can gain the most benefit from them. But as for the potential damage, they’re made for knives, after all, so they won’t wreck your knife.

However, using an electric knife sharpener over a manual sharpener won’t provide additional advantages if you don’t understand how knives are sharpened in the first place.

Both types of knife sharpeners (manual and electric) have advantages and disadvantages. As a result, if one has the financial means, it is recommended that they purchase both. However, if we must choose just one, we should consider our requirements, and we should also consider our personal preferences.

When picking between the two types of sharpeners, there are a few general aspects to consider. If you’re a beginner cook, you might mistakenly believe that all knives are the same. Knife professionals can show you that this is not the case. The knife’s quality does make a difference.

Below are the benefits of using an electric knife sharpener:

Curious about manual knife sharpeners? Well, these have their peculiar advantages, too:

Can You Use an Electric Sharpener on Serrated Knives?

To avoid build-up around the sharpening disks, make sure the knife is clean. Use the stages of sharpening in the proper order. If you are only trying to hone the knife and not sharpen it, the majority of knife makers suggest using the fine settings on most machines. For a serrated edge, the fine stage is ideal and recommended; make sure to sharpen only the flat side and not the serrated or scalloped side. When using an electric sharpener, insert the blade from the front, moving it quickly toward you while exerting light pressure to the knife, allowing the knife’s weight to do most of the job.

If it’s a survival knife, the metal used to make it might be tougher to withstand the punishment it’ll receive in the wild. It’s also possible that it has less serration along the blade than a kitchen knife.

Whatever materials your blade is made of, your sharpener must be able to handle it. Having the wrong tool will likely make it challenging to achieve the desired sharpness. It’s also crucial to think about the material, as various fabricators temper steel at different temperatures. As a result, the steel rod must be harder than the blade; otherwise, the steel will be too soft to perform the task.

Make sure the blade doesn’t have any structural flaws. You risk injuring yourself and damaging your equipment by attempting to sharpen it if it has been significantly chipped or the blade has cracked. Keep an eye on the number of knife serrations, too. If the serrated edges are severely worn, you may want to try to return the knife to the maker for refinishing or replacing it entirely.

How Much Should a Good Knife Set Cost

What Utensil Do You Serve Cake With