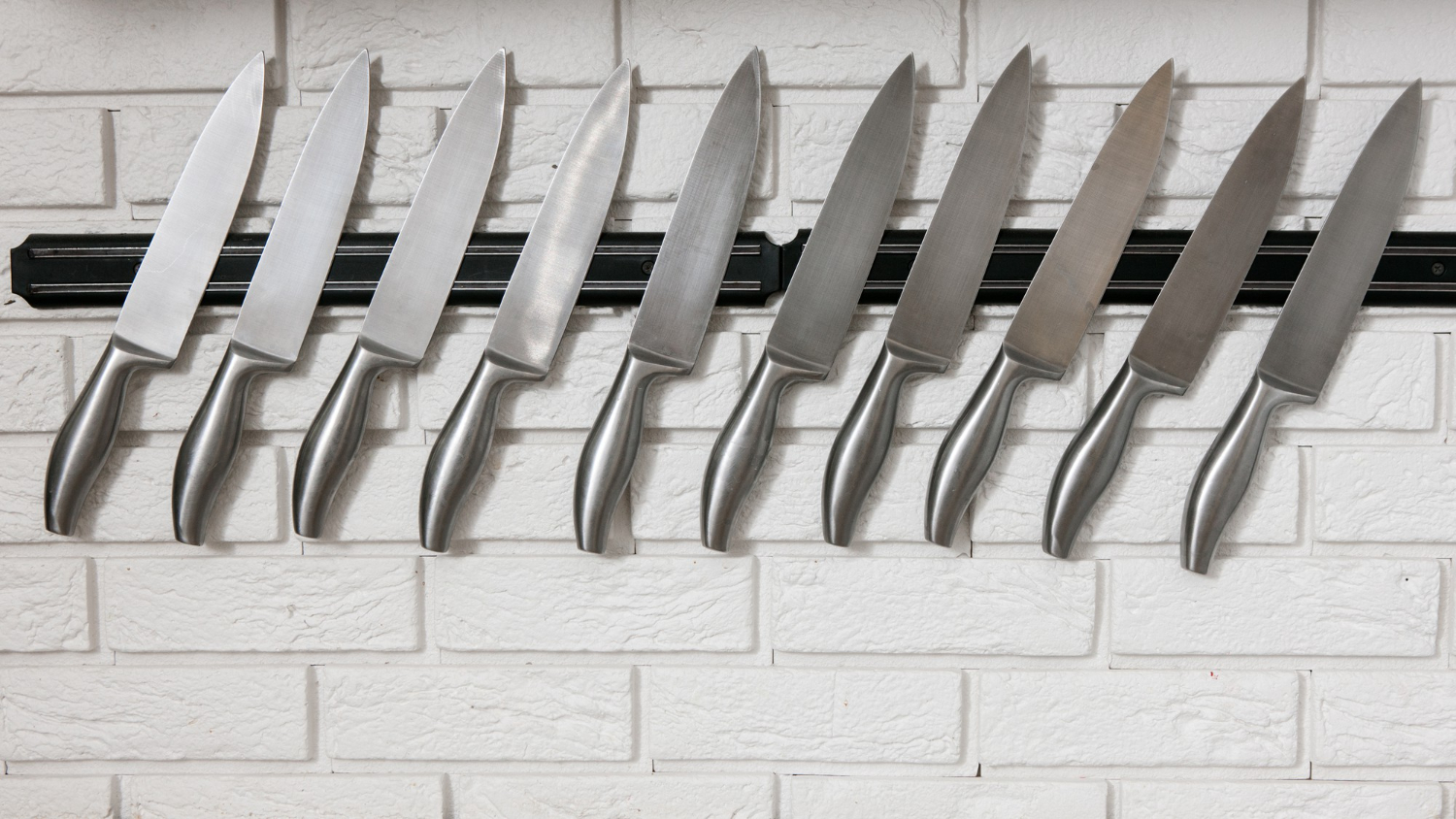 The magnets don’t dull knives because they aren’t strong enough to bend a blade. However, those racks have the potential to damage your blades. It’s pretty easy to drag the edge along with the rack as you pull it off, and it’s also straightforward for the magnet to snap the blade against the frame as you put it back on.

Both are, however, avoidable. When withdrawing the knife, rotate it so that the sharp edge will exit the magnet. When you put it on the rack, let the blunt side touch first so that when it snaps on, only the flat side touches the frame, never the blade.

It’s also beneficial to choose a version that isn’t just exposed metal; there are numerous on the market with the magnet hidden beneath the wood. It’s not ideal if you drag the blade across it frequently, just as you wouldn’t want to remove it across your cutting board, but it’s a lot better than metal. Furthermore, because the knife isn’t directly against the magnet, the force doesn’t build as abruptly as it does as you approach the rack, resulting in less snap.

A bare metal magnetic knife rack is not a good choice if you’re concerned that you or others in the home are not always careful with knives. On the other hand, the wooden kind is probably alright unless you’re extremely careful of your blades.

Long-term usage of a magnetic rack, according to some, could magnetize the blade, allowing it to pick up tiny fragments of metal, especially during sharpening, which would subsequently wear and dull the edge. This isn’t a significant issue as far as I’m aware: I’ve seen blades stored on magnetic blocks for extended periods without apparent magnetization. But, of course, you may always keep an eye out and, if required, demagnetize the edge.

A problem that could arise later is during sharpening (on a stone, not while sharpening steel). Over time, the knife will most likely become magnetic. When you try to point it, microscopic particles attach to it, making it more difficult to sharpen. As a result, it may appear dull because you can’t get it as crisp as you used to.

You can get around this difficulty by slamming it against a wooden board multiple times (back of the blade). This will demagnetize the edge, making sharpening much more accessible.

Knife blocks do not damage knives. They’re the best option for storing knives next to solid magnetic strips.

A countertop knife block is the most excellent option for knife storage ideas if you have more counter space and want to keep your knives within easy reach of your work surface. But don’t bother with the one that comes standard with a set of knives unless you want to be bound to the limited slots of a knife block set. You’ll want a block without pre-sized spaces if you’ve been creating your diverse collection of knives (as you should).

Many countertop knife blocks are angled diagonally to allow blades to be slid in and out at an angle, although they take up more room. Instead, choose a partnership with slots at the top for more excellent space and a cleaner, more elegant appearance. Once again, how you position and retrieve the knives will aid in keeping the blade sharp: When sliding a knife into and out of a slot, push the knife’s rear side against the wood rather than the short side.

Knives and kitchen sinks are made of stainless steel, but they’re constructed of various alloy combinations. Therefore their magnetic characteristics are different.

Why are restaurant knives magnetic? Restaurants have such massive losses of silverware that they place an enormous magnet in their waste bin so that when silverware is accidentally thrown into the trash can, the forks, spoons, and knives all become stuck to this magnet, which can become quite magnetized if left on there sufficiently.

As a result, one would wonder if ordinary steel is magnetic.

Almost all steel you come across or see is not magnetic. Steel, on the other hand, might be converted into a magnet. Because it is primarily made up of ferromagnetic elements, steel is a magnetic substance because magnets can drag it.

Should Knives Point Up or Down on Magnetic Strip?

Knives can be positioned in various ways – horizontally or vertically, depending on the user.

Knife blocks tend to occupy plenty of space, especially if your kitchen is small. Hanging your knives on the wall frees up counter space and allows you to see whatever knife you’re selecting plainly. In addition, you may keep your blades in an easy and accessible place, whether you place them on a strip or in a customized rack.

Locate a spot in your kitchen where you can hang the strip. Allow enough space to turn each of your knives so that you can quickly grab them. You should have enough room to choose a knife without knocking over the others. Utensils are commonly hung over the sink, above the stove, or behind the counter on the backsplash. Keep the knife strip out of children’s reach.

A magnetic knife strip should be purchased. Find a magnetic strip that can hold all of your blades, or buy two shorter strips to divide your knives into distinct rows. Knife strips can be found in specialty kitchen stores and on the internet.

Mark the board where you’ll hang the strip with a level. Mark the wall where you want one side of the knife strip to go. Make sure the magnetic stripe is straight by using the level. Next, draw a line where you want the ribbon to hang with a pen or pencil. If your space allows, hang the strip horizontally or vertically to add interesting detail to your kitchen.

Mounting strips should be attached to the back of the magnet. Apply adhesives to both ends of the magnetic stripe, such as Command strips. Apply at least one more mounting strip in the middle if you have a more extended magnet or plan on supporting a large number of knives. Some mounting strips have Velcro attachments for a secure fit that can also be removed quickly. If you want to tighten the strip, even more, use screws and a drill to fasten it to the wall.

5 Benefits of Business Signage To Your Restaurant

Why Can’t You Use a Cooking Utensil Made of Cardboard

Why Are Ovens Blue Inside