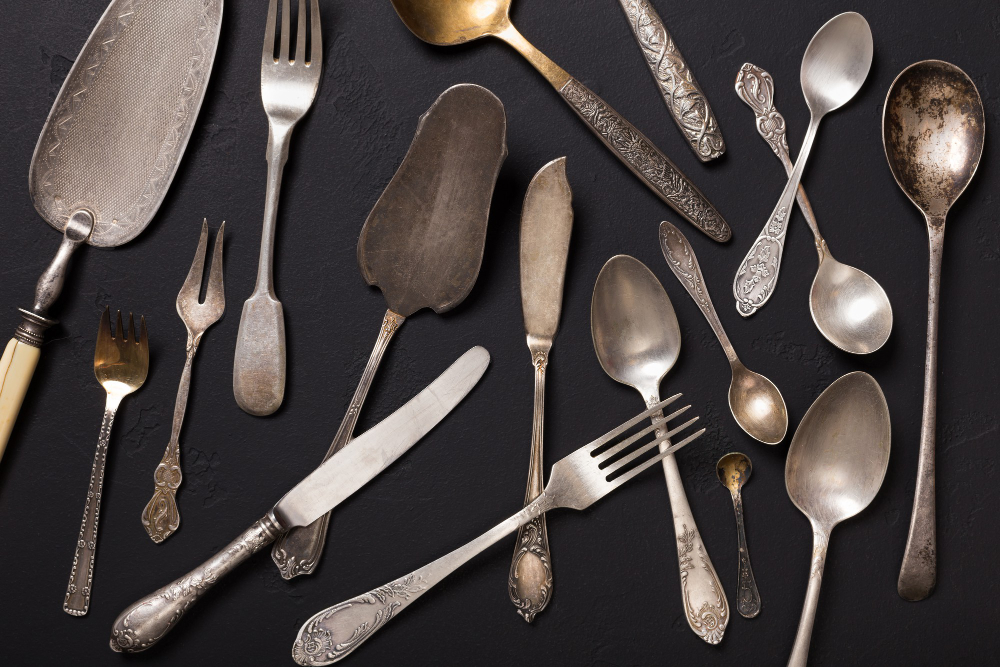 Why Does My Cutlery Taste Metallic

After using your cutlery, is there a lingering flavor of old pennies in your mouth? Dysgeusia, a difference in your sense of taste, can be caused by various medical issues. According to multiple studies, it’s also common to have a “metal mouth,” a symptom of dysgeusia.

The sense of taste is included in the list of the five senses. It’s a combination of several different brain processes. People who experience a metallic taste in their mouths may be experiencing physical or emotional changes.

In addition to the hundreds of taste buds and papillae found on the tongue, different senses such as smell, touch, and temperature influence how we perceive flavor. Several factors can generate a metallic taste in your mouth, including your dining utensils.

Dysgeusia is a disturbing taste in the mouth, such as a metallic taste. In addition, burning mouth syndrome can cause a burning feeling in the mouth, which may occur.

Despite its metallic taste and smell, this iron is safe to use in small amounts because it is not hazardous. However, you should avoid using metalware if you don’t want to wind up with a metallic taste in your food.

What Happens If You Can Taste Metal?

If you merely have a metallic taste on your tongue, the explanation might be any of some things, including dehydration. However, they are uncommon explanations and are usually accompanied by other symptoms.

Doctors have acknowledged that COVID-19 can cause a loss of taste and smell for a long time, but some people have also reported experiencing a metallic taste.

Typically, the metal mouth disappears once the underlying cause has been addressed; however, a metallic taste in the mouth caused by COVID-19 may persist for several weeks or even months after you have recovered from the virus.

A variety of circumstances can cause a metallic taste in the mouth. For example, the problem may go away on its own or when a person changes their lifestyle, such as ceasing to use a particular prescription.

Another reason for leaching is when your silverware is used on acidic foods, which can occur when your cutlery is used on sour dishes. Leaching is described as how metal utensils lose their iron content after being exposed to acidic foods such as vinegar and tomatoes for an extended time.

What Does It Mean When You Can Taste Metal From A Fork?

Depending on the sort of material used to make your fork, it can significantly impact the taste of your meal. Many scientists and food enthusiasts, on the other hand, have been looking into how metal affects flavor.

Using the right flatware enhances your sense of taste, but it also has other benefits. Every piece of silverware currently on the market has the same effect on your food, irrespective of the metal grade used in its construction.

Eventually, it comes down to the type of metal you’re working with and how it tastes when combined with food. Because copper, bronze, and iron have a metallic flavor, most people have eaten with their fingers for thousands of years before creating bone and wood chopsticks.

Furthermore, it should be noted that silver, which was once favored among the wealthy, has a metallic flavor that is difficult to get rid of. On the other hand, copper and zinc have a powerful and assertive flavor followed by an unpleasant metallic aftertaste.

How Do You Get the Metallic Taste Out Of Silverware?

The use of cutlery causes some of the atoms from the cutlery to end up in your mouth every time you consume something. Metals can react with saliva in your mouth and generate ions, which may have a distinct flavor due to the metal’s electrode potential.

Most metals will have a metallic taste due to tarnishes accumulating on their surfaces, primarily oxides, which have a distinctive metallic flavor. The non-metals are typically highly reactive, and because of the reaction with the air in your moist mouth, they taste terrible.

A metallic taste can be indicative of a severe condition, such as renal or liver disease, untreated diabetes, or some malignancies, among others. On the other hand, if a metallic taste in your mouth is your only complaint, the cause might be any of some things, including prescription medicines or a medical problem.

The most prevalent causes of a tinny, metallic taste inside your mouth have everything to do with your oral hygiene routine. For example, gingivitis is caused by not flossing and cleaning your teeth regularly, and it can leave an obnoxious taste in your mouth.

In addition, dental disorders such as abscesses, infections, and even wisdom teeth eruption can result in an unpleasant taste in the mouth. If you don’t have any irritation in your teeth, you may want to check your utensils.

How Do You Get The Metallic Taste Out Of Stainless Steel?

Using stainless steel utensils can reduce the amount of throwaway flatware individuals use to consume food outside. However, if you’re a first-time user of stainless steel cutlery, you’ll notice a lingering metallic taste and smell.

It is safe to reuse most stainless steel bottles because they are 18/8 food-grade stainless steel. Many others, however, have expressed displeasure with the metallic aftertaste.

If you’ve tried all of these methods and still find yourself dissatisfied with your stainless steel cutlery’s metallic odor and taste, you may want to consider using wood or bamboo instead.

Can I Use Metal Utensils With Le Creuset

Why Do Plates Smell After Washing

Which Ninja Blender Should I Buy?