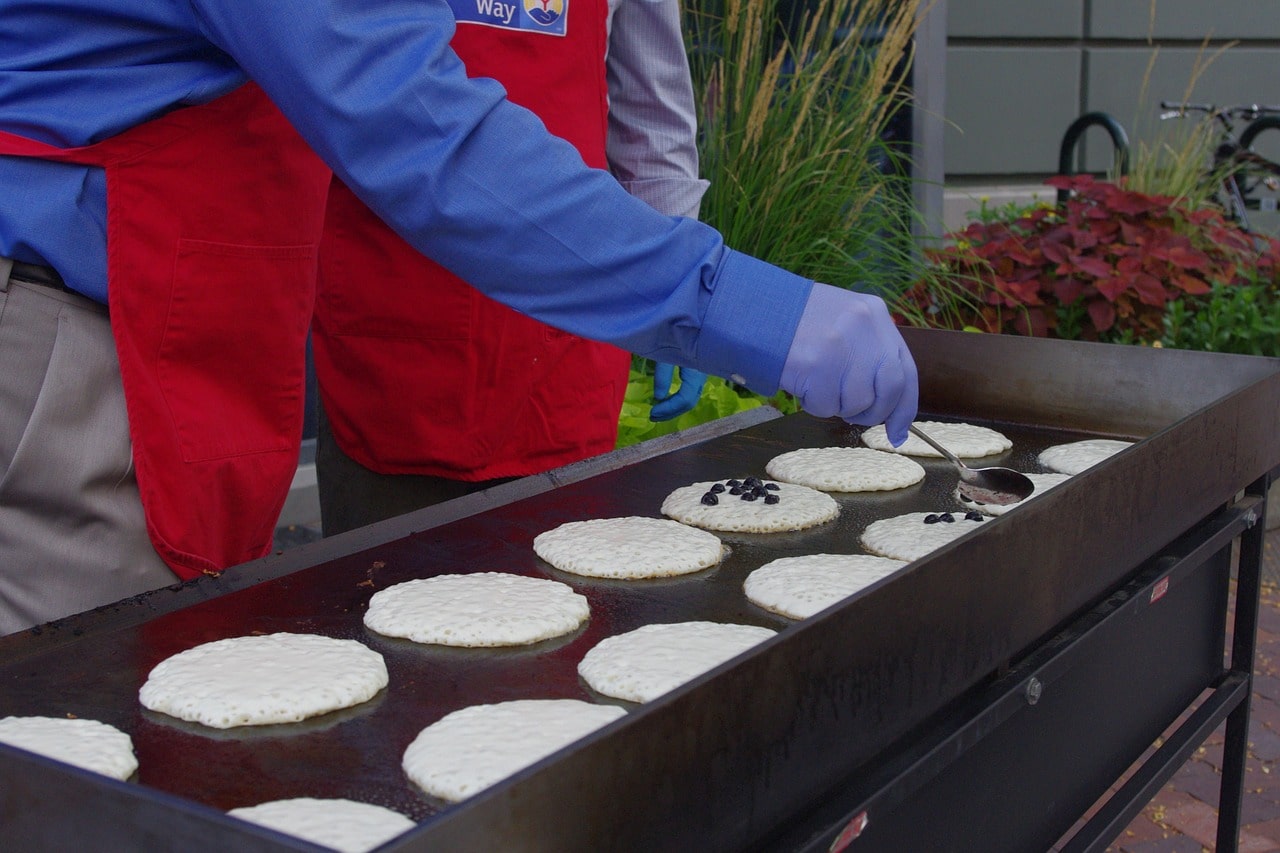 Griddles are flat cooking surfaces made of cast iron or aluminum, with a nonstick coating. If cooking large quantities of food, a griddle can provide enough space to minimize the use of multiple pans and pots. A griddle can also come from various shapes and sizes—for personal and commercial use. Smaller griddles may have square-shaped with a single, long handle. The rectangular ones have handles placed at each end. Commercial uses have large griddles placed atop of a stove range or can be used outside through coal-operated griddles.

What Are Griddles Used for?

Owning a griddle could be cost-efficient in the long term. The griddle is a flat metal surface with a direct heat source underneath. The wide and flat surface will provide sufficient space for maximized cooking. The griddle can be considered as a larger version of frying pans at home. The griddle’s thickness suggests improvements in cooking quality and heat retention.

It also uses dry heat, and the food will be cooked in its fat content. Fats and other liquids will not have a chance to spill outside the griddle since it is leveled or with a fat dripper placed on one or two sides of the griddle. This will produce the best pancakes, fried eggs, hash browns, and other breakfast items using just single cookware.

Griddles can be classified according to their plate material, heat source, and temperature control. In a general sense, griddles are classified into the traditional griddle, residential griddle, and commercial griddle.

The traditional-type griddle is made with two parts: the stand and the surface. Traditional griddle stands can be taken from natural and human-made resources like large stones, brick slab, or a tablet. The two stands are placed to serve as a space from the heat source (charcoal, wood, hay). The temperature can be controlled by

Cultural differences create innovations for the griddle’s surface. In Latin America, budare is a griddle made with stone or clay to cook flatbreads like arepa and casabe. Modern-day versions use flat metal called comics.

Traditional Scottish griddle (named girdle) is made with a wrought iron disk with an upturned rim. This allows the griddle to be hooked or suspended over the fire from the major chain and hook to cook scones, bannocks, and oatcakes.

Welsh’s traditional griddle (named bakestone) is dish-shaped cast iron with a thickness of 1 centimeter. Like the Scottish griddle, bakestone has an upturned rim for it to be suspended on fire. It is used to cook Welsh crepes, cakes, and pikelets.

This type of griddle has a portable, compact plate suitable for residential use. The residential griddle can be gas-based or electric-based. Residential griddle may be made with wrought iron, aluminum, carbon steel, or stainless steel. Protective coating (like Teflon) is added to the plate for added nonstick quality.

A commercial-type griddle can be single countertop equipment or can be added to a part of larger kitchen equipment. This type is widely used in restaurants, fast foods, and other commercial food establishments. Plate material could be a composite of aluminum and stainless steel. Just like residential griddles, the commercial griddle can be electric-generated or gas-generated.

What Is Good to Cook On a Griddle?

The griddle is not only limited to helping home cooks produce the ultimate breakfast combination. A pancake-egg-toast-bacon combination is already a great meal, but the griddle can produce even more recipes you can’t imagine. Serve some single-pan recipes without the mess of cleaning other pans and pots.

French toasts can be created quickly through griddle. After soaking your bread with some milk, egg, and melted butter, place your bread slices on the heated griddle. Add the filling of your choice or a combination of sweet, fruity, and savory fillings.

Fish and other quick-cooking seafood can be cooked on a griddle. Create multiple seared salmon faster by placing it in the same batches.

Create better sandwiches by rendering the meat strips on the griddle. You may toss it in some red bell peppers, eggs, and cheese, or even with beef chili. You may even place a flatbread and produce variations of quesadillas and burritos.

Julienne or grate some potatoes to create hash browns, tater tots, and potato pancakes. You may also mix other root crops like cassava and sweet potato to create crispy fritters. Besides frying, you may also scorch the food to add a rustic, smoky note to your palette.

Are Griddles Better Than Grills?

Just by looking at the cooking surface, griddles and grill have a huge difference. Griddles have a flat surface, while the grills could be in the form of solid steel plate ridges or bar-type. Unlike griddle cooking, grilling requires higher temperatures to work efficiently. Griddles are indeed superior to grills because they can quickly and effectively cook for larger groups of people. The griddle’s larger cooking surface ensures that you can cook food at volume. The lack of sides makes it easier for the cook to flip the food so that both sides cook quickly and evenly. Griddles are also essentially open areas, ensuring that their moisture isn’t trapped during the cooking process. For instance, if you are cooking a large batch of hash browns, the griddle’s design allows the potatoes’ moisture to dissipate quickly and effectively. The result is easy to predict: crispy hash browns that have a ton of flavor. Electric griddles also provide an additional benefit to home cooks everywhere – since they’re electric, the heat distribution is more even. Hence, the cooking surface is much more efficient than a gas grill where there will be cooler spots and overheated parts. The imbalances between the areas in a grill often result in uneven cooking.

What Is Right Pork Chop Temperatures to Making a Juicy...