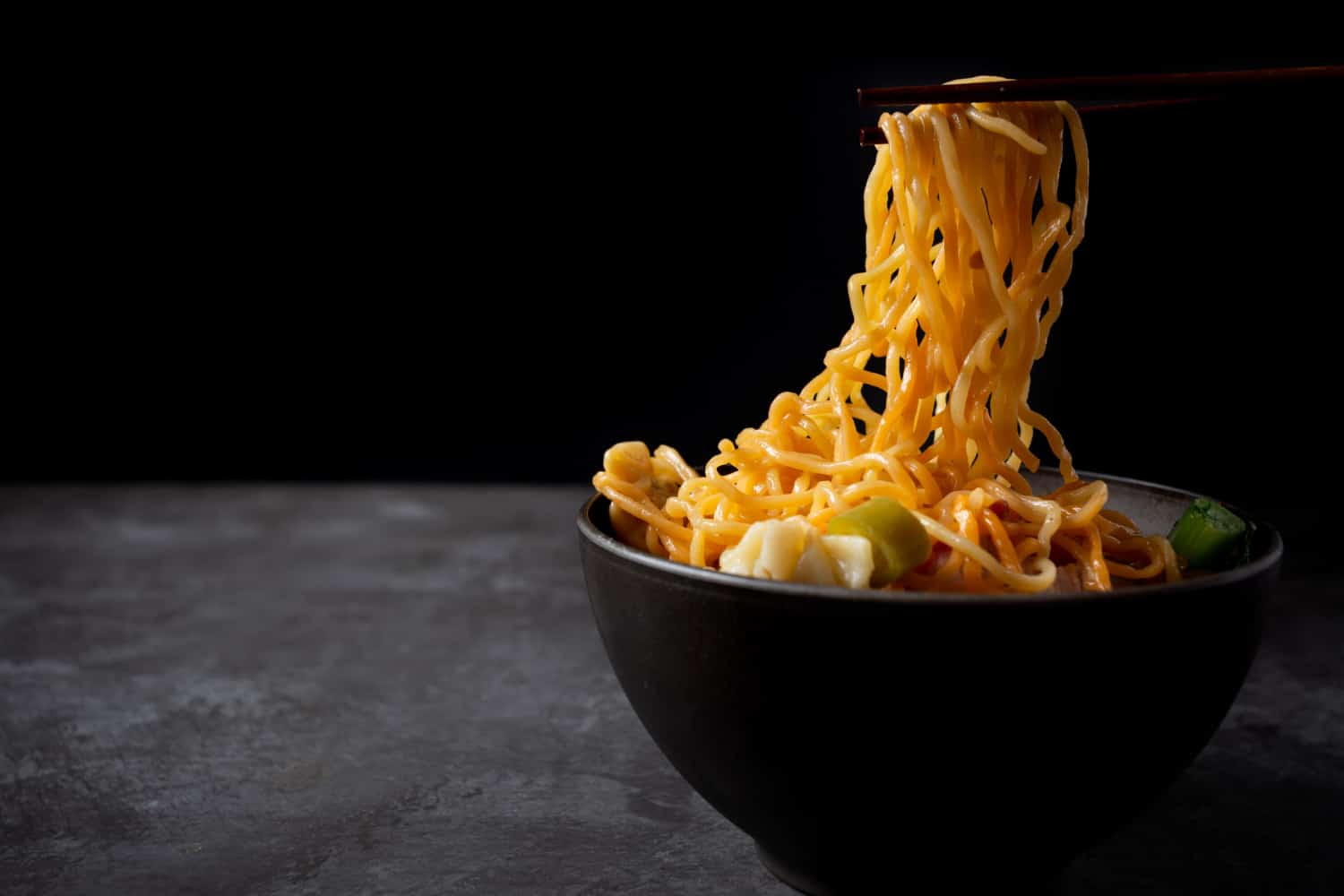 In a general sense, spaghetti and noodles are composed of different structures. The defying factor of these carbohydrate sources relies on two primary factors: starch source and eggs. Starch, in the form of flour, encompasses three-fourths of the ingredient. This produces the overall stretchiness and “bite” for your spaghetti and noodle.

On the other hand, egg ratio can define the overall taste and structure between spaghetti and noodles. Eggs provide volume, texture, and flavor to your dough. Noodles tend to have higher egg content than pasta. This produces enough fluffiness that works perfectly when used on stir-fried noodles, a staple Asian cuisine.

Are Spaghetti and Noodles the Same Thing?

Classifying spaghetti to noodles can be defined by taking note of its differences. Spaghetti, a form of pasta, is generally a different category than a noodle. While “pasta” and “noodles” are used interchangeably by some, it has a gleaming difference as well.

What is a noodle?

A noodle is a staple carbohydrate made from unleavened dough that is cut, stretched, or extruded into long strips or strings. Like pasta, a noodle can be cooked fresh or fried, or dried for future use. Noodles are a staple food found in several Asian countries like Vietnam, China, Korea, Japan, and the Philippines.

The change of primary components creates a wide array of variants and flavors to your noodle. Noodles can be made with several primary ingredients like wheat, rice, buckwheat, egg, potato, acorn, corn, etc. These primary ingredients serve as a starch source for the noodle variant.

What makes the noodle different is its comprehensive starch source, unlike pasta which uses a single flour variant. Noodles are available in two shapes only: the cylindrical variant and the strip variant. Strip variant is used in stir-fried noodles recipes like pad thai and oyster noodles. Cylindrical noodles can be used on soup-based noodles, like ramen.

What makes pasta different from noodles is its wide array of shapes and sizes. There are about 300+ variants categorized into the following: long pasta, short pasta, minute pasta, egg pasta, fresh pasta, and baked pasta. Since pasta has been introduced internationally, this became a staple as a restaurant and home dish. The commonly known pasta variants are spaghetti, fettuccine, lasagna, and bow-type pasta.

Like noodles, pasta is made with unraised dough mixed with water and eggs.

Different areas have produced different variants and methods of preparing and cooking pasta. The known process, called one-pot pasta, involves creating the pasta sauce and pasta noodle into a single pot. Pasta can also be baked, like macaroni and cheese and Bolognese lasagna.

Is spaghetti a noodle or pasta?

With these considered, we can infer that spaghetti is a form of pasta. Spaghetti is a well-known long pasta (together with capellini and linguine). Spaghetti is known for its cylindrical shape, which provides better coating and sauce distribution. Spaghetti is served best with Bolognese (a tomato-based sauce) or with the lemon-butter mixture.

To simplify things, spaghetti and noodles are not the same things. Noodles have higher egg content and can be made with several starch sources. Spaghetti is limited to its primary flour source, wheat.

Which Is Healthier: Spaghetti or Noodles?

Spaghetti and noodles may taste and look similar, but pasta has a more versatile starch source—making it more versatile. Starches found on potatoes, seaweed, and buckwheat possess better nutritional benefits to anyone’s body. You can receive better protein, thanks to the increased egg ratio found on noodles.

Aside from its muscle development properties, consuming protein-rich food like noodles can satiate your hunger while reducing your carb content at the same time. You only need to consume one-half of your original spaghetti serving if you will be substituting it with noodles.

Athletes are consuming spaghetti as their primary source of carbohydrates during their carb-loading. Carb-loading is a process of consuming enormous accounts of carbohydrates before the game to provide a better energy source. This is done by expanding the glycogen tank of the body, which is commonly found in spaghetti and other pasta.

Other diet methods that require lower carbohydrate content cannot use pasta variants like spaghetti in their meal. Another concern is the high-gluten content found on wheat, barley, and rye. This is why noodle variants have been introduced as a better alternative than spaghetti.

To shorten things out, you can consume noodles daily. Athletes and runners who use more significant amounts of sugar for their intense workout need to promptly consume pasta products like spaghetti to regain their sucrose level promptly. Having a low-sucrose content can stagger and collapse any athlete.

Can Spaghetti be Used as Noodles?

Different cultures and cooking methods require a specific type of noodle or pasta. It could be hard for some Asian and Italian markets. Replacing pasta to recipes that require noodles can be a good thing or not, depending on particular situations.

Aside from the change of overall structure, replacing noodles with spaghetti can deplete its original nutritive elements. Fresh pasta uses only one-third of the egg used in making noodles. The change of proportion creates a stiffer texture that may not work well on recipes that require tastier, fuller noodles (like Japanese ramen).

If you want to try to use pasta to replace your noodles, you might consider using the following: